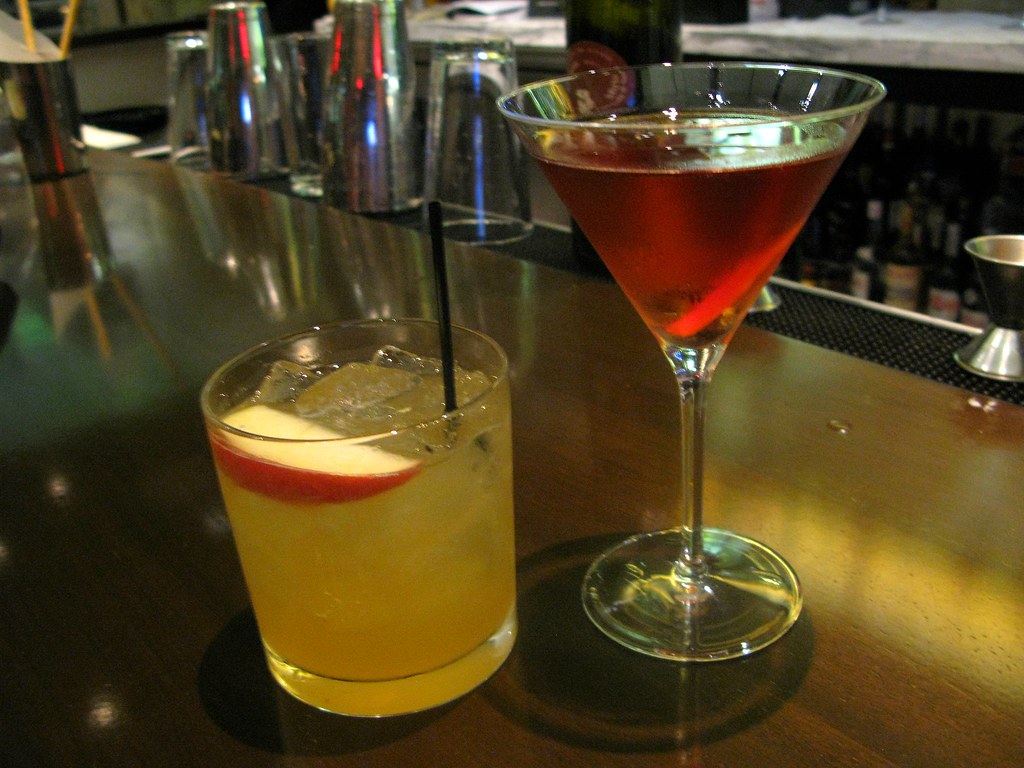 So yesterday on Twitter, Drago Centro‘s sommelier/beverage director Michael Shearin mentioned how he’s going to debut the restaurant’s new springtime cocktail menu one special night very soon and only charge $6 for each one a la Rivera’s one-night cocktail debuts. 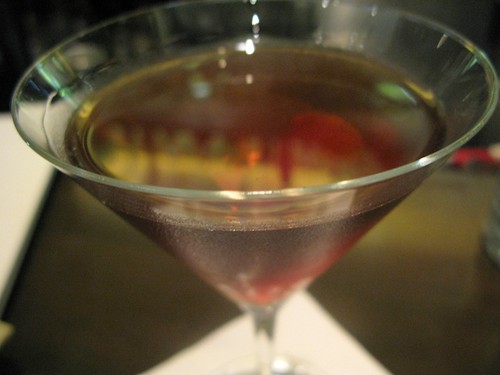 First it was going to be this Thursday but that had to be pushed back to next Wednesday due to filming. Anyhoo, I had happened to be downtown last night checking out J Lounge’s happy hour  (great food and service but horrible cocktails). But after a very disappointing tequila Manhattan I needed to get a good drink in me right quick. Michael responded to my Tweet for help, “I’ll make you a good tequila Manhattan if you want to stop by.” M’OK!

With estarLA in tow, we made our way over. And that’s when I realized, “Heyyy, maybe Michael can give us a sneaky peek of the spring cocktail menu.” But when we got there he was mum about it…

At first. He couldn’t give us the menu or the names of the cocktails because both are still works in progress. But he was able to make us three of the cocktails from the new menu. No names or fancy garnishes, just ingredients for now. I offered to name the drinks but Michael said they had to be in Italian. So with the help of an Italian/English dictionary I’ve included my own suggestions for names. Heh. To be clear, these aren’t the real names for the drinks, just ones I made up because I was bored. When you check them out at Drago for yourself, just look them up in the new menu by their ingredients.

As for the other cocktails on the menu, Michael said that each spirit will be represented so there’s something for everyone.

For sustenance, Chef de Cuisine Ian Gresik brought us out a a small cast-iron pan of gnocchi with sweetbread and English peas. OMG SO good! Buttery with fresh, tender gnocchi. And Pastry Chef Jashmine Corpuz fixed us up a beautiful plate of three arty samples from the dessert menu: Il Budino di Cioccolato and I Bomboloni, which will be transitioned out to make way for the new spring menu, and the brand-new La Torta di Primavera. 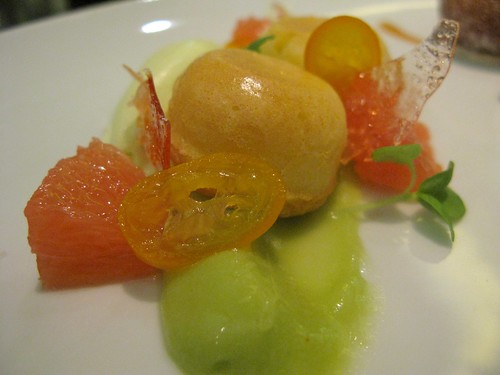 Naturally I gravitated to the creamy chocolate custard and caramel gelato of the budino as well as I Bomboloni’s small sugared doughnuts, brown butter ice cream and deconstructed apple pie-ness. However, if you’re not a big fan of grapefruit or tart flavors, then La Torta di Primavera isn’t for you. Sure, it had delicate puffs of olive oil cake and nommy avocado mousse but the grapefruit, although very juicy, was too tart for my tastes. Not to say this was a bad dessert. It’s just not my type.

You can look forward to the new spring dessert menu in about two to three weeks.

And if you’d like to sample the new spring cocktails, hit up Drago Centro next Wednesday, April 14 where the drinks will debut for a one-night only price of $6 each.

For a video of Michael making the Terre Lontane cocktail and estarLA’s taste impression of the drink, head for the jump.