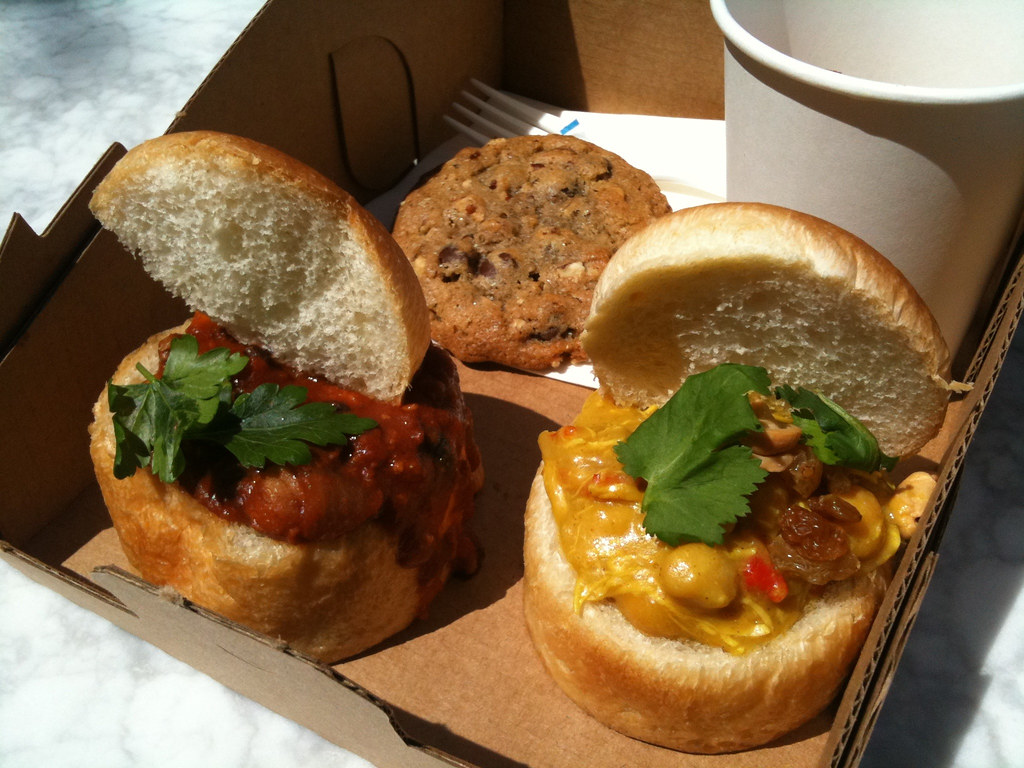 “You fools are missing out,” I wanted to say to my co-workers who basically ignored me when I excitedly emailed them about the World Fare bus restaurant docking in Food Truck Alley in Santa Monica for the first time. Later I stood atop the bus all alone waiting for my food order to be called out from below. Hmf.

Maybe my colleagues just didn’t like the idea of ordering food from another taco truck only to have to bring it back to their desks. It was a lovely, sunny day after all. But little did they know that unlike the usual occupants of the mobile food alley, this one actually has a place to enjoy your food: the top of the double decker bus which is shaded by umbrellas and offers a counter where you can set your meal while standing there and noshing. Max capacity is a cozy 25 people, although this day there was just me. 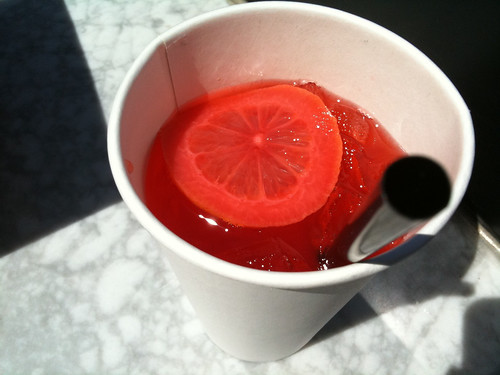 At first I thought it would be nice if they actually had seats but this way I was able to people watch the dumbfounded passers-by below; apparently not every day you see such a thing. And turned out it wouldn’t take me too long to finish my meal considering when I eat alone, I tend to eat faster.

So LAist had a special where if you order two bunnies and mention LAist you get a chocolate chip cookie and if you order three bunnies you get a red velvet cupcake. But I went with the combo ($10) with two bunnies, a side of truffle mac n’ cheese balls and a cookie. The “bunnies” aka little pockets/sandwiches stuffed with your choice of filling — short rib, chicken curry, BBQ braised pork, meatballs or vegetarian chili — were pretty messy, though, and I was grateful that the cashier had tucked a handy wipe in with my order. Their bready vessels were soft and didn’t really contain the mess all that well. After the first couple of bites I had to resort to using my fork. Not that I’m complaining. Both my veg bunny and the chicken curry were soo delicious. Very savory but not too spicy. I didn’t have a problem with that but those out there who like the hot stuff might.

As for the menu, it’s runs the mill from a hybrid of South African street food…to a high-end steakhouse. The core menu mainly consists of Bunny Chow, originally an Indian-influenced South African food where a loaf of bread is hollowed out and used as a container for curry chicken. 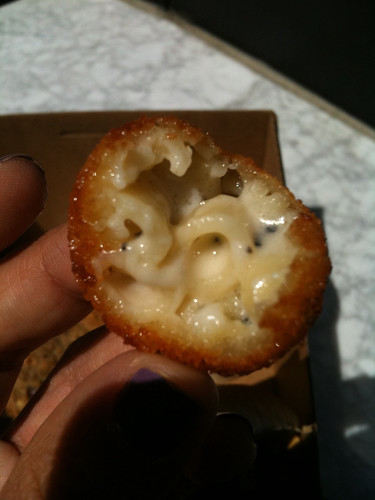 The truffle mac and cheese balls came in a group of three in a cup. Crisp on the outside and cheesy, creamy inside. Would have liked some seasoning or maybe some peppers in it but regardless I could have easily popped more in my mouth. Mmm, I want this with beer. The chocolate chunk cookie lived up to its name. I had originally wanted to save it for later so I could nuke it back at the office for extra melty goodness but I couldn’t wait.

As for the strawberry basil lemonade, it was just OK. Nothing really spectacular with only a really subtle note of basil. At least it wasn’t syrupy or too sugary. I was more disturbed by the red lemon slice which reminded me of the fruit punch bowls my mom used to make.

$14 is more than I usually spend for a lunch but then again I don’t usually get a drink or a cookie, plus I was stuffed afterward. The quality of food here was pretty impressive compared to what you usually find in most food trucks. They even have food presentation here. Check out how they take the slice of bread and make it stand atop the sandwich like a sail.

I’d definitely come back the next time World Fare drops by Food Truck Alley. Next time for dessert I want to try the butterscotch bread pudding or the “richest brownie you’ll ever eat,” the Forbes bunny brownie.