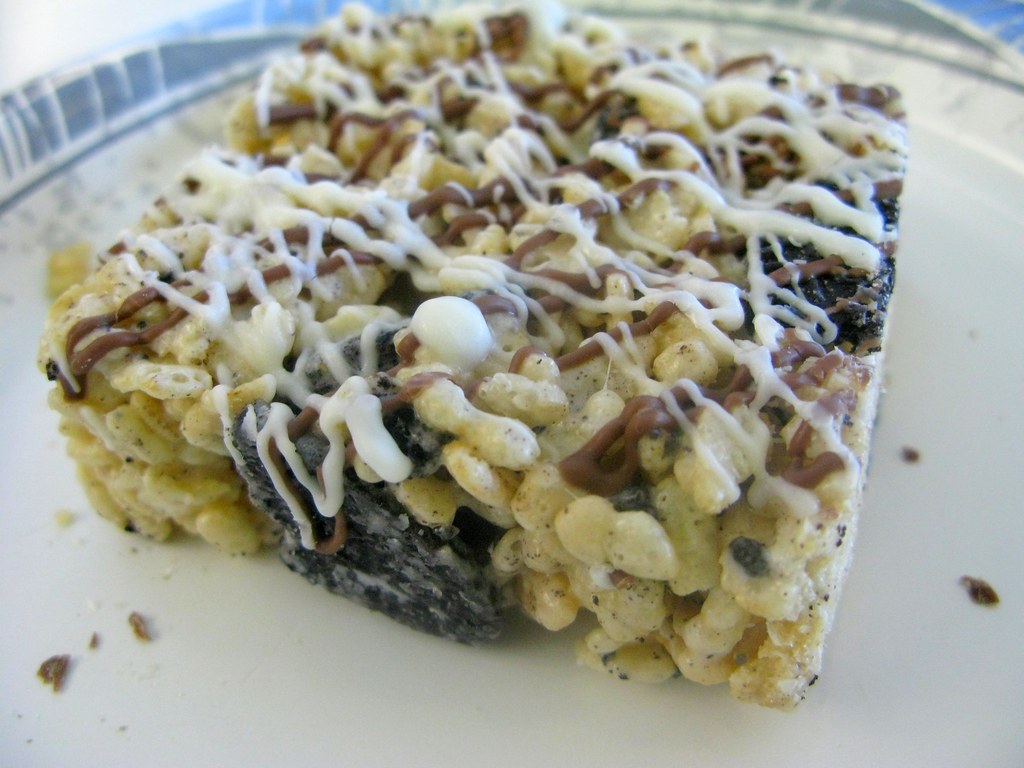 I don’t know how but I ended up with a cinnamon doughnut from Huckleberry, Schat’s cinnamon pecan loaf and salted caramels at my desk. I blame the booze fast which has only served to aggravate my sweet tooth. Always snacking now. So you can imagine how conflicted I was when Milk & Krunchies sent over a box of four of its gourmet rice crispy flavors for me to check out.

As much as I wanted to, there was just no way I could eat all those and at the same time I didn’t want them to go to waste. So I enlisted the help of four of my co-workers. Co-workers who I knew had refined palates. Well, OK, they just like sweet treats, too.

I’d just have them taste each treat and let me know their impressions.

At 3pm, the midday snacking hour, we met up in the company kitchen area and sampled the following M&K flavors: 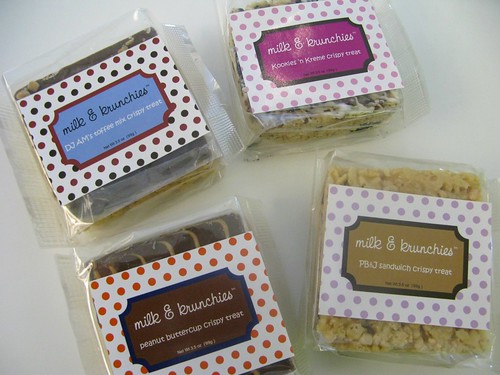 Everyone was pretty lukewarm about the peanut butter flavored treats, which we agreed just didn’t have a

tester of the PB&J Sandwich. The peanut was so mild that some of us even questioned if there was any PB in the ingredients.

The girls thought the Peanut Buttercup looked pretty what with its drizzling of peanut butter on the chocolate layer; looking like a Tiger Butter bar. “This one kicks ass,” said one taster of the treat. All agreed this one was not as dry as the PB&J and it had a tiny bit more peanut butter flavor.

Of the Kookies n’ Kreme, there were mixed opinions. Some thought it was a nice rice crispy treat with a little something different.  While others thought the flavors were “way too subtle.” “I just taste the white icing.”

The DJ AM toffee treat kicked off a brief conversation about DJ AM’s sudden death last year, and then we moved on to the treat. “It has a much stronger taste. You can taste the toffee.” “This is the one most true to its name.” “It’s sweeter, too.” “It’s the first one I can see sitting in a cafe and enjoying with coffee.”

It’s no surprise that DJ AM’s Toffee Mix was the resounding favorite. While we all appreciated that none of the treats were uber sweet, we ended up liking the sweetest of the bunch. Our least favorite of the four was the 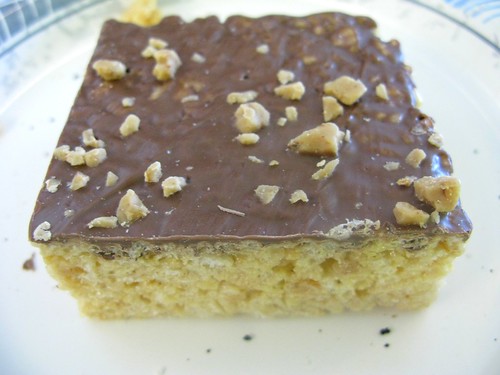 PB&J which didn’t really impress us at all. “Why would I buy this one when I can just make something like it at home?” one taster asked. While the toffee treat proved exceptional. Definitely not as easy to duplicate in your own kitchen.

Regarding pricing, on the M&K site, they come out to about $18 for a box of six. All but one person said they liked the price of the treat which is basically $3 each. The dissenting voice reasoned, “That’s a little pricey for an RK bar, even with the extra flavors. I’d pay $2 or maybe $2.50 tops.”  Apart from the site, you can also buy them at Joan’s on Third, Vincente Foods and Nordstrom Espresso Bars.

BTW,  as a memorial for DJ AM, whose birthday would have been March 30, Milk & Krunchies is selling a special gift box containing two toffee treats for $10. All proceeds will be donated to the DJ AM Memorial Fund which helps organizations and projects addressing addiction and recovery.