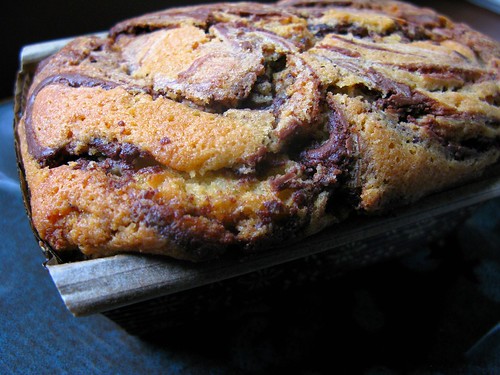 Nutella Poundcake by Joan's on Third

For World Nutella Day last week, Joan’s on Third made the yummiest poundcake I ever heard of: Nutella poundcake. Why didn’t anyone tell me that such a thing of beauty existed? Luckily I found out from Nastassia of Let Me Eat Cake, who happens to work at Joan’s and who was good enough to save me a loaf! Huzzah! I braved a torrential rainstorm and cross-town traffic during rush hour to pick it up. And twas sooo worth it.

Once I got it home I dug into it, nearly eating the whole thing in one sitting. Fortunately (or
unfortunately) I was able to remember to save some for my bf since I had been going on and on about it and he was good enough to drive me through a torrential rainstorm in rush-hour traffic to get it. Would have been rude if I didn’t at least save him…a sliver. 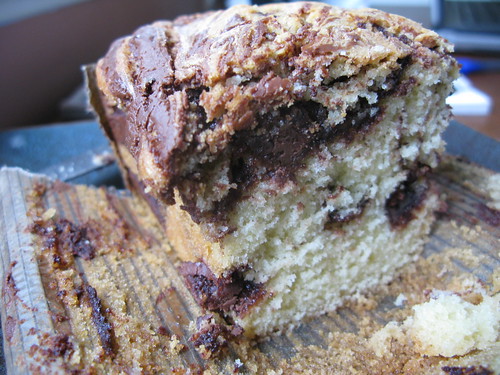 Anyway, the cake was so moist and OMG the ribbons of Nutella that ran through the cake were like crack, making it difficult to stop eating. Just when I was about to store the cake away, I’d bite into a motherload of that chocolate-hazelnut goodness and continued to nom away. I call this the Ben & Jerry’s effect. And the top of the loaf was a little denser than the rest of the cake, so I could break if off to enjoy like you would the edge of pie crusts.

I have no doubt that I could polish off a whole loaf all by myself.

In any case, you’ll be happy to know that this isn’t a once-a-year thing. Joan’s on Third will be making more Nutella poundcake for this Saturday but they’ll be sold as slices at $1.95 a slice.

However, if you’d like to make one for yourself, unfortunately and understandably, Joan is keeping that recipe to herself but Nastassia has some behind-the-scene coverage of the making of the cake. And I found this Food & Wine recipe for a Nutella Swirl Poundcake that you can take a stab at.

Don’t know where to find a jar of Nutella? Use this handy-dandy site to locate one near you.