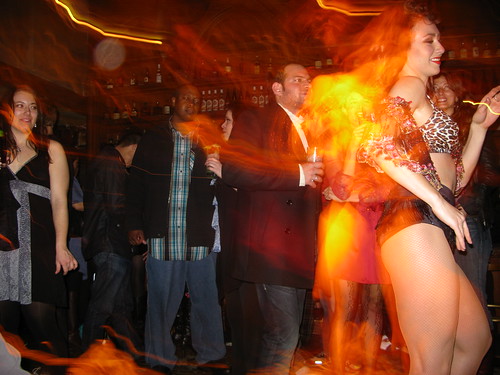 It was a hot, sticky night in Havana. Men in suits were lounging in the new happening bar, trying to cool off with chilly mojitos and Cuba Libres. Their ladies all dolled up in clingy dresses shimmied to the thrum of the Conga music blaring through the speakers in the main room. Meanwhile a burlesque dancer, all fishnetted legs and flying hair, gyrated her way through the crowd while her bodyguard kept careful watch from the sidelines. 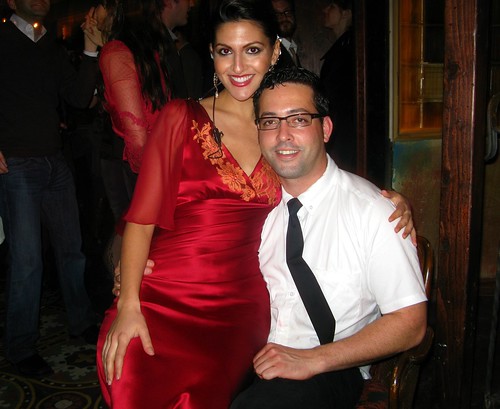 The hostess and Pablo

I took in the vibrant scene while nursing my daquiri, my bf’s arm draped around me as we cozied up on a loveseat opposite the bar. We had a prime spot for people-watching. But suddenly a line of people came trudging down the narrow spiral staircase, bundled up in raincoats and scarves, shaking the rain from their hair. And I realized I was not in Havana anymore.

It was actually a drizzly night in Los Angeles; Koreatown, to be specific. And the new rum bar, La Descarga, had just opened its doors earlier in the week much to the delight of cocktail enthusiasts, L.A. nightlifers and bloggers. Here is something new and different from the speakeasies that have populated the city the past few years.

Even different from the

Tar Pit, the 1940s-esque bar that opened a couple of months ago. Not only is La Descarga located in a neighborhood other than downtown but it offers up a sorta secret entrance that rivals PDT’s phonebooth in New York, a burlesque floor and catwalk show, a dedicated cigar and premium rum room as well as an impressive menu of about 70 rums.

The parlor-like club is designed to evoke a pre-Fidel Cuba?before things got sticky?back when people knew how to enjoy the finer things in life, even if they didn?t own a sugarcane farm.

Mixologists Steve Livigni and Pablo Moix were good enough to invite me to check out their new digs. Not that I wouldn’t have anyway. Steve has his own beverage consulting company, Top Notch Beverage Consulting, while Pablo hails from behind the bar at STK in West Hollywood so I knew the drinks here would be excellent.

Currently La Descarga’s specialty cocktail menu, with drinks that range in price from $9 to $13, only offers rum-based beverages but the boys are looking to expand it in the next two weeks to include cocktails made with other spirits. And, sure, if you’re looking for something other than rum right now, there’s a full bar at your disposal. 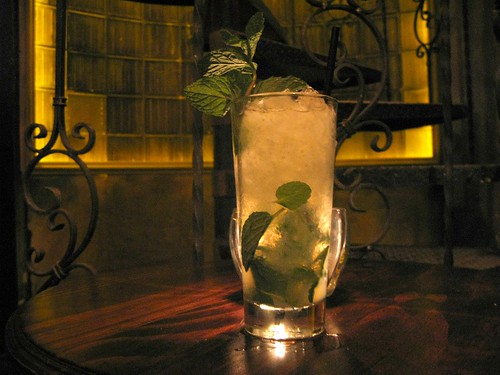 What you see at La Descarga at the moment is only the beginning apparently. It’s still a work in progress. For instance, there’s another 2,000 square feet of space behind the bar in the backroom that may reemerge in the next four to five months as “something.” Whatever it is, Pablo and Steve aren’t elaborating.

They did let on, however, that they’re looking to do up rum flights and punchbowls in the back room. And there’s some cocktail on the horizon that Pablo calls “The Next Level” which involves a huge ball of ice that’s hollowed out and dropped into a punchbowl for two.

But on this night, cocktail blogger Thirsty in LA (aka Daniel) and I contented ourselves with what was currently on the specialty cocktail list while bf stuck to Maker’s with one cube of ice. Daniel went for Tapping the Admiral ($13), a concoction of Zaya Rum, Carpano Antica, Cherry Heering and bitters. I didn’t get to taste it because I was afraid of giving Daniel my cough but he said it was sweet, aromatic and potent.

Unfortunately there was no sign of the yummy-sounding Bad Spaniard cocktail mentioned in LA Times‘ Daily Dish blog so on Steve’s recommendation, I ordered the Honey Swizzle* ($12) which he said had a hint of anise flavor due to the Aguardiente Cristal and wasn’t overly sweet despite the cocktail’s name. “We don’t have candy sweet drinks here,” he reassured me.

Now, I’m not a big fan of anise, licorice or absinthe flavors but it actually worked in this cocktail, which started off with that hint of anise and then dissipated into a bite of citrus. There was sweetness but it was pleasantly subtle. Mmm, Honey Swizzle. 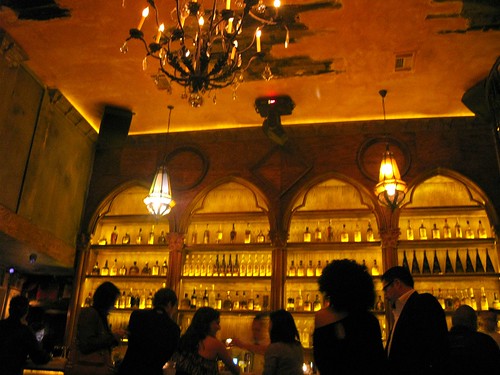 Crowd at the bar

I also tried the house daiquiri, La Descarga Daiquiri ($9) with its mix of Diplomatico anejo rum, lime and sugar and the Cuban Mojito ($10) with Bacardi Carta Blanca, mint, lime, sugar and soda but the Honey Swizzle was my favorite. Maybe because this is the only place you can get a Honey Swizzle while daiquiris and mojitos are more readily available. Although, the ones made here are derived from classic recipes so if you want them done as close to authentic as possible, get ’em here.

Now my blogger friends Food GPS and EstarLA both claimed the Tropical Holiday cocktail ($12) — which offered a promising mix of Rhum JM Blanc, Velvet Falernum, lime, sugar, soda and bitters — to be their favorite from the menu, but for some reason the one that Daniel ordered was…not that great. After a sip, I found it too bitter for my liking. Ack! Gag! “This is my least favorite drink,” Daniel coughed. We guessed that maybe they just went too crazy with the bitters for this batch. Will have to give it another chance the next time we swing by.

OK, now, there are a couple of misconceptions running around about La Descarga. Rumor had it that reservations here are required when in fact Steve says they’re only recommended. Sure, you can swing by here on a whim but if you have some friends with you and intend to show up on a Friday night at 10, it’s best if you made ressies first. They just don’t want people to have to stand outside in line waiting to get in, plus it’s a great way to control the flow of the crowd.

BTW, if you show up during the cabaret show — which consists of Conga drums, sax and a dancer — you’ll have to wait for 15 minutes til the performance is over to be let in. Showtimes take place on Thursday, Friday, Saturday nights at the top of the hours of 10, 11, 12 and 1 o’clock. And the later shows tend to be more risque and longer; incentive to stay late! We’re talking bar dancing and fire sticks.

But if you find yourself flaking out on reservations a couple of times, be warned that you’ll be SOL if you try to make a third one. Ohh, they keep track of flakes here. All Steve asks is that you treat your reservation here like you would with a restaurant. If you can’t make it, let them know ahead of time.

Another misconception is that there isn’t a dress code. On a Friday night after work, I showed up in jeans and a frumpy gray sweater. Did manage to dress it up with a string of pearls though. In any case, Steve said that, like the Edison downtown, there is a dress code of no shorts or flip-flops, etc. and they’d rather that men wear suits and women don beautiful dresses. For a place as special as La Descarga, I can see why they’d want you to look nice. Heck, I’d want to look nice coming here.

Plus if the dancer happens to step out in front of you during the floor show and the spotlight’s on you, you’re going to want to look your best as you Rumba with her.

La Descarga definitely makes it on my list of top fave bars in L.A. You can come here for a show, cigars and premium spirits — all without a cover. I just recommend getting here before 9 if you really want to enjoy the space cuz it gets packed. I can’t wait to check back in to try their expanded cocktail list with more spirits in the coming weeks. But for the next visit, I’ll make sure to don a purty dress.

_* Two of my cocktails were comped except the Cuban Mojito._