Delphine at W Hollywood: You're Beautiful but M'Eh 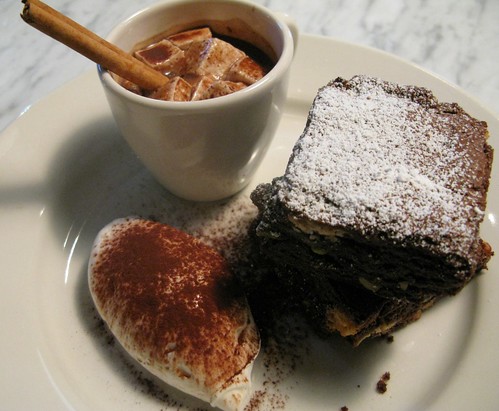 Oh, Delphine. I was swayed by your W swank ways, charmed by your French name and drawn in by all that online hype via LA Times‘ Daily Dish, UrbanDaddy and LA Weekly‘s Squid Ink announcing your debut. But despite your gorgeous space and intriguing cocktail menu, I discovered after an impromptu rendezvous last night…that you actually aren’t all that.

Yup, blogger H.C. of LA-OC Foodventures and I swung by the new barestaurant located in the brand-new W Hollywood. After a very educational sake tasting at Kabuki Hollywood (more on that later), we were in the mood for some dessert and cocktails.

On a Monday night the bar area was empty-ish with a couple of patrons taking up some bar stools. The restaurant located further toward the back, however, was a-buzzing. But we cozied up to the gorgeous marble bar and admired the French cafe style setup of the seated area behind us. A quick study of the cocktail menu revealed unusual concoctions for prices ranging from $9 to $14. 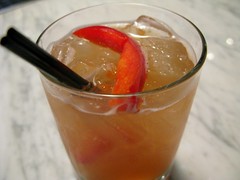 The cocktails sounded so unique that they could easily go either way of good or terrible. There was only one way to find out. I was this close to ordering their Manhattan (which is actually on the menu for $10) but decided to be adventurous and go for their Seven Seas ($11), made up of Seven Tiki Spiced Rum, walnut liqueur, agave nectar and red bell pepper.

Now, I don’t usually like red bell peppers. Frankly, I hate ’em but decided to give them a shot here. Who knows? It might open my eyes to something fabulous. Plus the bartender said that you couldn’t really taste the bell peppers anyway, and that the drink tasted like Thai food. Uh, yeah. Again, could be good or terrible.

Unfortunately, it was terrible! Rum is a sweet spirit and the vegetable-ness of the red bell pepper just completely interfered with that. Now, I usually love spicy and sweet but here the bell pepper wasn’t that kind of spicy. “It tastes like a salad,” H.C. wrinkled his nose after tasting it. “Ugh, yeah, I don’t like it at all,” I replied, pushing the glass away from me after many sips of “Hmm” and “Nope.”

Couldn’t even finish it. Sigh. A little part of me dies every time I leave a half-full cocktail behind. We found out later that the bartender had subbed Captain Morgan’s for the Seven Tiki since they were out of it but had neglected to tell us. Regardless, I doubt that could have saved the drink for me. 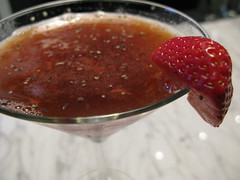 I choked a bit but then the sweetness of the strawberries soothed it away a bit. “I’d have this as an aperitif,” H.C. said. It did have that salad-ness to it. Unlike the yummy dessert finish of the Library Bar’s Last Tango in Modena. This cocktail was m’OK but I wouldn’t go out of my way for it.

Hoping to have ended the night on a positive note we dug into our desserts ($9 each). I opted for the warm pistachio brownie served with a cup of hot chocolate with marshmallows while H.C. went with the apple hazelnut crostada with goat cheese and vanilla bean ice cream. His was better.

My dessert, although oh-so promising, was incredibly disappointing. 1) The brownie wasn’t warm and it was very dry, 2) the cocoa wasn’t all that sweet and its marshmallows tasted like erp, 3) I couldn’t even taste the pistachios even while I was chewing them. 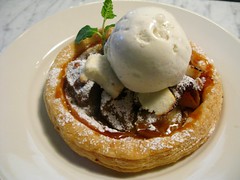 This all made me wonder if it was all done on purpose. Maybe the cocoa wasn’t sweet so that it wouldn’t overpower the brownie. Maybe the brownie was dry so you could wet it with some cocoa or the accompanying whipped cream. Whatever the case, I didn’t like it.

But H.C. fared better with his apple tart. The combo of goat cheese, apple and ice cream was divine. We even took turns dipping the vanilla ice cream in the hot cocoa. Mm, made it better!

Now the service was friendly and accommodating enough and I would have tipped our bartender 20 percent but it still surprised me to find that the bill had already accounted for a 15% service charge. Wuuut? For just two people? I never heard of that before. A party of six, understandable. But to add that in without warning the patrons first? What if people don’t bother to add extra since they feel the tip was already figured into the bill for them? Or what if people double tip?

So, yeah, Delphine was lovely and maybe a sexy, luxurious option for those seeing a show at the Pantages who can’t find an empty bar stool at the Frolic Room. But I wouldn’t make a special trip here.

Although I do suggest taking a stroll around the W Hollywood’s lobby next door. Purty!