Trip 'Round the World for $35: Copa d'Oro's Whiskey Flight 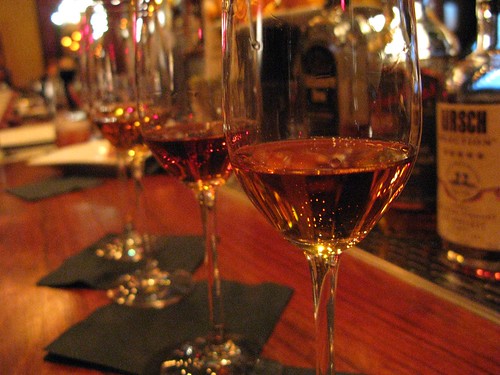 Around the World Whiskey Flight

The other night as my bf and I were enjoying his birthday dinner at JiRaffe in Santa Monica, he mentioned how he really wanted a bottle of really good whiskey to keep at his own place. You know, since I insisted that the bottle of Macallan 12 that I gave him for Christmas stay at my place so that we could enjoy it together, heh. Anyway, after dinner I insisted that he allow me to buy him a cocktail at my fave bar Copa d’Oro since he’s usually the designated driver and won’t even touch the stuff then. This time I’d be the DD so he wouldn’t have to worry.

But when we got to Copa and I perused the menu for a suggestion to give him, I was reminded that they offer flights here! Three to be exact: Around the World of Whisk(e)y, Highland and Lowland Reposado Tequila and Single Barrel American Whiskey.

Seeing as how he likes to travel, I sprung for the trip around the world for a Travelzoo-beating $35.

Around The World of Whisk(e)y Menu

Unfortunately the bar was currently out of the Suntory so I left it in bartender Joe Brooke’s capable hands to find a suitable replacement. He chose the Elijah Craig 18 and I guess they were out of the Eagle Rare 17, too, as we got an Elijah Craig 12. But Joe said that was so we could compare how vastly different the years are. And instead of the Glenrothes, we got the cask-strength Glenfarclas.

So yeah, a bit disappointing that the tour kept us primarily in North America but my bf didn’t seem to mind all that much as each glass contained primo stuff.

Joe was good enough to go over each whiskey, describing its history and tasting notes, a process he says some people actually like to skip just so they could get straight to the drinking. Dumb, I say. It helps you appreciate what you’re drinking more when you learn a little bit about it. Of course we forgot all that Joe told us about each one, but we still appreciated the schooling.

Out of the whiskeys bf had, each was soo tasty that he was hard-pressed to rank them for me. However after much deliberation (and badgering on my part) he came to the following conclusion. I included his impressions of each. As you can see, he is a man of few words:

Suffice it to say, the whiskey flight at Copa d’Oro is a fun way to sample some top-shelf stuff in one affordable sitting. Treat yourself or your fave whiskey lover or even a newbie whiskey drinker you want to get started on the right foot.