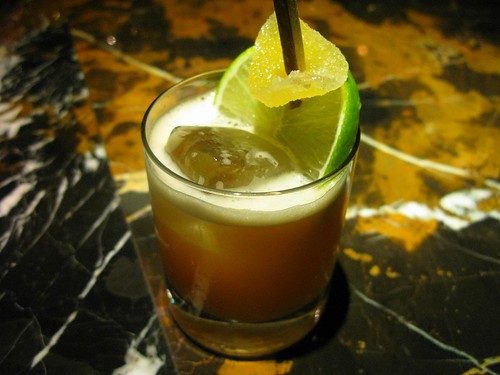 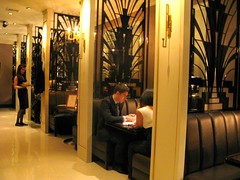 We were going to crash the Tar Pit‘s press party no matter what. It was essentially a sneaky peek of the brand-new La Brea Avenue bar by famed mixologist Audrey Saunders (Pegu Club, NYC) and chef Mark Peel and Jay Perrin (Campanile). And this would be a hot ticket as press was swirling the Interwebs from the New York Times to L.A. blogs weeks before.

We don’t need no steenkin’ invite! Me and blogger friends H.C., Esther and Maya first heard hint of this elusive party on Eater LA and seriously considered just showing up at the door, velvet rope be damned. But then it turned out that 1) the anticipated party date moved and 2) H.C. ended up scoring an invite anyway and then forwarded it on to us. Woo hoo!

Still there was the little matter of rsvping and getting a confirmation. Fortunately we were all able to secure that. Turned out that wouldn’t have mattered anyway since they weren’t even checking names at the door!

I walked into the space and it just took my breath away. This wasn’t done up in the speakeasy bar format that has been all the rage with small quarters, low lights and a no-photography rule. The Tar Pit was Hollywood glamorous with art deco touches, gorgeous chandeliers and a jazz trio. I half-expected Veronica Lake to walk in through the door.

There was no Veronica but I did spy head barman Marcos Tello, of The Varnish and The Edison, running the operations in the back. Something I wasn’t used to since one normally sees Marcos out front in the spotlight, mixing up the drinks and regaling customers with cocktail history. As it was, he was in the thick of things, making sure everything was running smoothly. Good man. 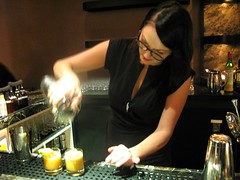 Bartender Naomi greeted us from behind the bar. On this night there were only about six drinks out of the Tar Pit’s extensive cocktail menu that she and the other bartenders were preparing for the masses. At first we thought, uh oh, they’re charging $11 for these tiny classic-sized cocktails? Not good. But then Naomi cleared it up for us; these were actually just a sample size, smaller than what will be served on a regular night.

Here are the cocktails I tried, which included a couple of ones they weren’t supposed to serve that night but I was lucky enough to get hooked up anyway. Hee!:

Cucumber-Mint Creole ($11): Gin, Aquavit, sherry, muddled cucumbers, muddled mint, lemon juice. This was one of my favorites of the evening. So minty refreshing and deceptively light! Perfect if you don’t want something alcohol-y tasting.

Gin Gin Mule ($11): Gin, lime simple syrup, housemade ginger beer. I only took a sip of this since I had enjoyed the Jamaican Firefly, a rum version of it, just before. But those who are fans of this popular Pegu Club house cocktail will be ecstatic to find it here. 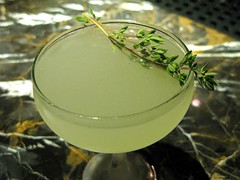 Lemon Thyme Daquiri ($11): White rum, muddled lemon thyme, housemade lime syrup, lime juice. This was one of the cocktails we were able to sneak off the menu even though it wasn’t supposed to be served this night. Definitely one of the bloggers’ favorites. Sweet but not confectionary. 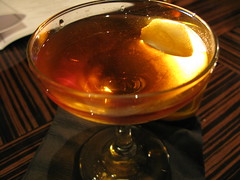 Trident ($11): Aquavit, Fino Sherry, Cynar Aperitif, peach and orange bitters, lemon essence. This cocktail, created by Robert Hess of drinkboy.com, was roundly panned by our little group of bloggers. It possessed an unappealing sharpness that perhaps was the fault of the artichoke liqueur. “It’s bitters heavy,” Maya noted. “It’s very aromatic,” our server explained. “People who love Manhattans may like it.” “But I love Manhattans and I hate it,” I responded. Definitely not for everyone.

Throughout the evening, appetizers from the dining menu were being passed around. Most things were scrumptious like the savory tuna tartare with plum brandy ($9), the buttery gnocchi with escargots ($13) and crab cakes in butter ($9). My ultimate favorite of the food, though, had to be the fried oysters ($9) which were served in a half shell with crisp ginger remoulade. I was a pig for this one. Even though Maya hadn’t had one yet and I did, I got tunnel vision when the server came by and immediately grabbed one of the last ones on the plate. Sorry, Maya! But yum! 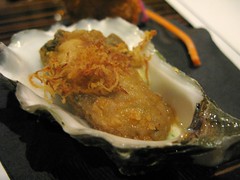 The only miss for me was the Artichokes Trastevere ($8) which essentially tasted like fried, unseasoned artichokes. Meh. It was more fried and oily than anything. And it would have been nice if the artichoke was more tender and seasoned.

In any case, I’ll definitely be back on a regular night, especially when all that swank is still so affordable what with $11 cocktails and dishes that range in price from $9 to $17. Most expensive dishes on the dining menu, which is also available at the bar, are the Lobster and Scallop Newberg and the Steak Diane at $17 each. (Or if you’re so inclined, Cube Marketplace and Cafe Restaurant is right next door.)

Hopefully this beautiful space will still be accessible after opening night tonight. Even though it seemed spacious during this press party, I can see it getting packed at the bar with all the booths reserved and a line out the door.

Well at least my friends and I had it all to ourselves on this one night. There will always be that.

Other posts on the event:

e*starLA: The Tar Pit Brings All Class, No Scuz

Thirsty in LA: The Tar Pit Is Simply Swellegant