Best of L.A. Cupcakes Tour With Bloggers and Chevy 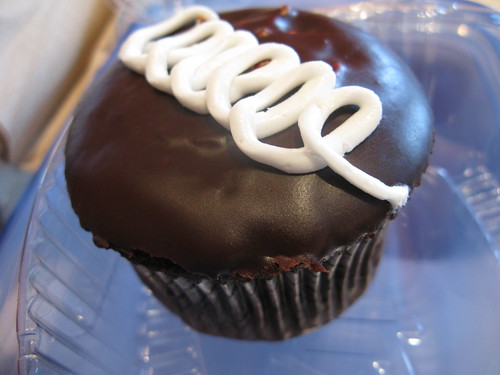 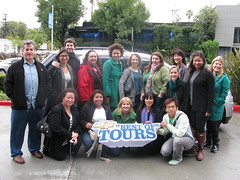 Happy National Cupcake Day! Yup, that’s today. And last Saturday I celebrated it early with a bunch of bloggers via a “best of L.A.” cupcakes tour thanks to Tara of Tara Met Blogs/LA Cupcake Meetup and Chevrolet. She normally does cupcake meetups at one location at a time but the carmaker was willing to supply the rides in the form of Equinoxes and one Transformer edition Camaro and chauffeur us to top cupcakeries Crumbs Bake Shop, Sprinkles, SusieCakes and Vanilla Bake Shop. We got treated to free cupcakes at each stop and received a gift bag at the end.

This is part of a grassroots effort by General Motors to reach out to the community. Last week they had shuttled 500 USC students in nine Equinoxes and Camaros to area fast food joints for a study break during their finals. I had asked the GM rep at the event about the possibility of doing one with cocktails because that’s when you really need a designated driver. Surprisingly he seemed open to it but we’ll see. 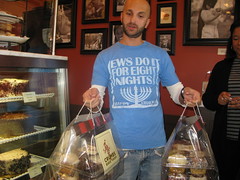 Anyway, the cupcake tour’s first stop was Crumbs where we were greeted by the owner and West Coast partner Harley Bauer, who actually walked out holding bags of boxed cupcakes. “If there’s a flavor you want to try that’s not in the boxes, let me know and I’ll just get it for you,” he said. “ELVIS!” I replied. I wanted the cupcake named after the King. It’s made with banana cake, peanut butter and has vanilla frosting. He boxed one up for me as I noshed on a Hostess-esque cupcake, the only one I allowed myself to eat during the tour. Mmm, moist chocolate cake and rich, tasty ganache.

This stop actually treated us the best even giving us coffee and water. After this it sort of went downhill. Said the spoiled blogger. Heh.

We walked on down to Sprinkles where they have a no-photography policy. We didn’t get to test that, though, as all 17 of us just wouldn’t fit in that small space. So instead they brought us out bags of pre-selected cupcakes — vanilla, red velvet and chocolate — to enjoy on the sidewalk. Meh. I snagged one of the red velvets, which I’m already more than familiar with, and dropped it into the Tupperware that I brought. 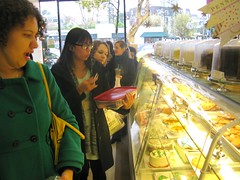 Next stop was **SusieCakes **where the workers had no idea we were coming. They, too, have a strict no-photography policy but then gave up trying to enforce it with us. And fortunately the store manager came out to take care of us. Here I picked their seasonal cupcake, gingerbread, even though Tara was touting their strawberry cupcake as the one that Martha Stewart said was the best ever. It did have a tasty strawberry frosting though. Again, I didn’t eat my cupcake at the store. At this point I was starting to feel a bit queasy from the car rides, the claustrophobia of being packed four bloggers a car and having devoured that huge Crumbs cupcake where I stood.

The final stop was Vanilla Bake Shop. The store was fairly empty so naturally the two workers behind the counter were a bit freaked out when we all stormed in and started taking pictures. They immediately ran to the kitchen to get their manager who came out all red-faced. “No pictures are allowed! No pictures are allowed!” Then she went back into the kitchen. Of course we protested but to no avail. I mean, two years ago they let me and my friend take pictures in their store. And NBC4 did a video inside their store.

Apparently the owner of Vanilla Bake Shop is afraid of people copying them even though her store and cupcakes have been featured in national magazines and ads. Whatevs. “The manager could have at least been a lot nicer about telling us,” the bloggers complained. It’s true, she could have. Tara said she had tried to get in contact with the owner to let them know we were coming but never got a response. 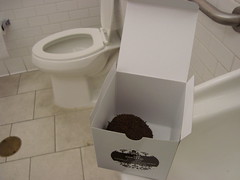 When Vanilla Bakeshop won’t let us shoot in the store.

Suddenly one of the workers, after having emerged from the kitchen, came out and said, “And no samples either.” Ummm, did we ask for samples? No. In fact Tara was in the middle of paying for our order of 17 cupcakes. WTH? I had ordered the yummy-sounding dark chocolate coconut cupcake but ended up giving that to our driver as a thank you, but also because I was really mad at the store.

H.C. of LA/OC Foodventures went to the bathroom where he took a picture of his chocolate cupcake near the toilet.

Vanilla Bake Shop used to be my go-to place for cupcakes especially because of those cupcake babies, but now I’m so not feeling it.

Fortunately, the tour didn’t end on a bad note. The drivers returned us to our meeting place at the Pacific Design Center and handed us gift bags which contained cupcake-related paraphernalia like cupcake stickers and cupcake lip gloss in addition to an InStyle book and a Tiffany keychain with the GM logo. Shelley of Faux LA Hipster opened the little blue box with such glee you’d think there was an engagement ring in there. “Yes, GM, I will marry you!” Heh.

Other posts about the event:

LAist: Tuesday is National Cupcake Day. So Who Has the Best?