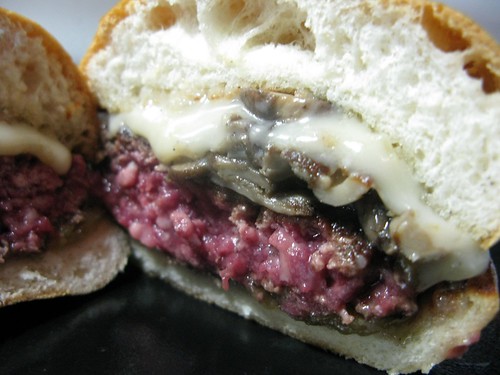 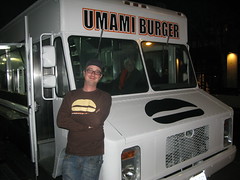 Last night, I was lucky enough to be invited by H.C. of LA/OC Foodventures to a “Secret Mondays” Festivus party downtown at the Crocker Club. But that wasn’t the lucky part. Rather it was that the much buzzed about Umami Burger truck was making its grand debut at said party. Apparently the party’s organizer and half of the Top Notch Beverage Consulting’s duo, Steven Livigni, is a regular patron and friend of the burger joint on La Brea so was able to score its debut for his event.

When we first arrived at the club the truck was parked right in front with nary a line. Just a plain ol’ taco truck with “UMAMI BURGER” across the front of it and the liplike buns icon.

The opening night menu was simple enough as well: Umami Smashburger, Sherry Mushroom Smashburger, Bacon Cheese Smashburger and LTO Smashburger ($8 each) and a Mexican Coke. Apparently, they’re still working out some kinks like how the fryer was broken so couldn’t make it out for the debut. Ah well, I was all about just having that sherry mushroom burger anyway.

I’ve never had an Umami burger before even though I’ve heard it’s the best burger in L.A. etc. so I didn’t know what to expect but was so looking forward to it.

H.C. and I decided to split the sherry mushroom burger since we had planned to stop at The Gorbals after the party. While they made our burger we tried to get shots of the guys in the kitchen cooking it up and they even posed for the cameras but the window was all steamed up so we couldn’t get a good picture. Boo. 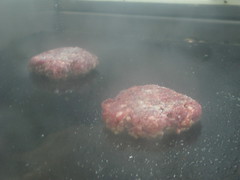 ****After a short wait, our order was up and they were good enough to cut it in half. We oohed and aahed as H.C. carefully unwrapped the burger. “Hmm, this is a lot rarer than I’m used to,” H.C. said observing the pink but juicy meat. I almost asked, “Is that OK” but then realized that I didn’t care as I was already wolfing my half burger down. Everything about it was soft, making it easy to essentially swallow whole. The mushrooms were so tender and flavorful…I think. And I remember being elated by cheese… Suffice it to say that I barely had time to savor it. Now I wish I had a whole one to myself.

In any case, I’d definitely give it a try again or at least finally check out the restaurants themselves which offer an array of burger types. Mmm, port & Stilton burger. As for where to find the truck, it’ll be camping out at Fred Segal in Santa Monica til the new Umami restaurant there opens up early next year.