Esther videos Shelley aka fauxlahipster and my roommate Kristina around the rink.

Aidan Demarest, The Edison‘s director of beverages, has taken it upon himself to bring Christmas to downtown Los Angeles. Our city doesn’t get much if any snow and Angelenos track the seasons by what the local weatherman reports about the rest of the nation, so Aidan decided to celebrate the 76th anniversary of Repeal Day and the holidays like they do back at his hometown of Boston, with a good old-fashioned ice skating party. 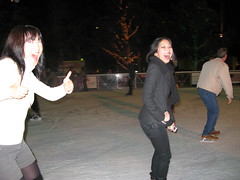 Shelley and Esther showing how it's done.

Last Saturday night the well-attended shindig kicked off at the Pershing Square ice rink. The Edison bartenders served up hot chocolate garnished with candy canes and mini marshmallows. A couple of us thought ahead to bring a little something-something in a concealed hipflask so we could add a little nip to the cocoa. Mmm, Kahlua cocoa.

A table covered with more sugary offerings of ribbon candy and cupcakes as well as roasted chestnuts energized the ice skaters. The ribbon candy was pretty but also remained untouched — too much sugar! — while the roasted chestnuts offered a welcome alternative to all that sweetness. They were nice and warm but for some reason I just couldn’t get them in my mouth as they kept slipping out of my fingers. Maybe it was all that Kahlua.

Santa (the best Santa in L.A. according to Aidan) and his missus were in attendance posing for pictures while Aidan stood by handing out gift boxes containing Woodford Reserve/The Edison-branded cashmere scarves. Perfect on this chilly night. 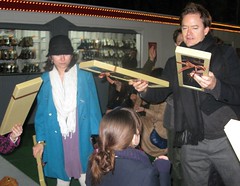 After a gulp of that special cocoa and a deep breath, I finally hit the rink after trying to avoid it. Thing is, I think I was given skates that were a size too big as I just felt all unwieldy and unsure on the ice. I imagined falling down and knocking my noggin on that hard ice. So I clung to the sides of the rink for dear life. How did I turn out to be such a wuss?

“This isn’t fun at all!” I told Aidan. So he took my arm and lead me around the rink. “Keep walking, don’t glide,” he suggested. Sure enough that helped a bit but I still held his arm tightly. Soon we were moving fast and I was squealing with laughter. “You want to whip it?” he asked after a couple of laps. “What’s that?” I asked, and he just laughed mischievously.

Crowds of on-lookers sitting outside the rink by the meat-on-a-stick and funnel cake pop-up tents waited for the party to end so they could skate. They shouted out helpful instructions and words of encouragement from the sidelines. “Skate safely, mister,” one little boy yelled to my bf every time he waddled by. 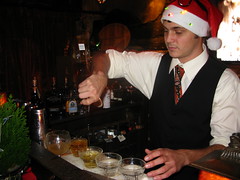 After our time at the rink was over, the 100 or so paying guests were invited back to the downtown bar itself for some Christmas cheer in the form of Woodford Reserve’s Christmas bourbon, egg nog with Jamaican rum and hot toddies. I wasn’t all that crazy about the hot toddies which could have used more honey but I couldn’t get enough of that spicy bourbon or the creamy egg nog with the freshly grated nutmeg. Now this was Christmas.

Everyone crowded into the back part of the Edison bar where the original Radio Room speakeasy nights used to be. There, a chanteuse and a guitarist entertained all with jazzy Christmas tunes. My friends and I chair danced while sitting down on a cushy sofa right by the egg nog punchbowl and saucy Singapore wings. And thankfully the Edison served some yummy hot chili with a cornbread stick to sate party-goers after all that skating and walking (Pershing Square is a 15-minute walk away from the bar). The chili hit the spot. Combine that with the richness of the egg nog and we were officially full. 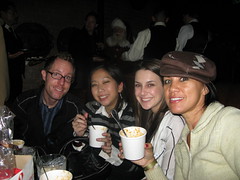 That was the cool thing about this event. At first I thought it would be another mad dash to passed apps and long lines to the bar but the Edison kept everything running smoothly with an egg nog station set up separate from the bar and passed apps in addition to tables of food. We never wanted for anything.

And even though I was able to score comped tickets for me and my friends, at $25 a person this would still have been a good deal. The scarf alone was worth $35 and skating would have been $20. Never mind how much it would have cost for all that food and booze!

The evening drew to a quiet close with the absinthe fairy pushing a cart of her wares into the back room. Santa was already long gone with a bottle of Woodford Reserve tucked under his arm but holiday cheer was still present in the form of tipsy revelers finishing up the last of the egg nog and then venturing to the main bar for a night cap.

Can’t wait to see what Aidan thinks up for next year.

Next big shindig at the Edison is the New Year’s Eve Nautilist’s Ball, where for $75 you get entertainment by DJ Imagika and Abney Park as well as a midnight champagne toast and desserts.