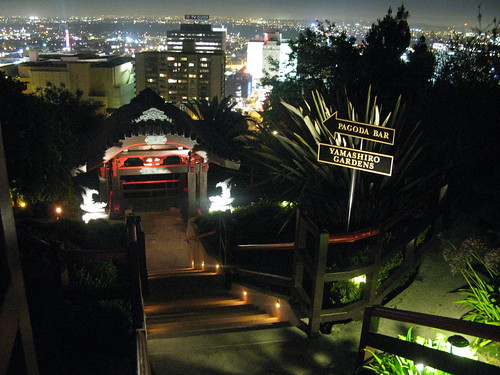 The way to the Pagoda Bar.

3 of 25: Wayyyy back in July I met up with LAisters Farley and Emily at Pagoda Bar, the then-recently renovated outdoor bar at Yamashiro in the Hollywood Hills. We were inspired to do so after discussing the items on my 100 list when we each admitted that we wanted to check it out and follow that up with a visit to Jumbo’s Clown Room. 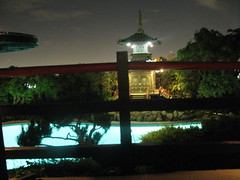 View of the pool.

The only problem was that I didn’t know about the outside bar and had instead waited inside at Yamashiro’s borrrring bar which didn’t seem all that special to me. “This is ‘new’?” I thought to myself as I sat all alone and forlorn at the dimly lit bar while the after-work crowd tippled and mingled. I waited and waited.

I think I would have felt a little bit better if I knew what Farley and Emily looked like since I’ve never met them IRL before. But as it was I kept scanning the room, looking for anyone to return my gaze. And since I didn’t have their cell numbers I couldn’t text them. And that was when I still had my sucky little walkman phone so it wasn’t like I could easily look up emails.

After about nearly an hour or so we were finally able to connect.

Turned out they were waiting at the outside bar, enjoying the view of L.A., drinking Mai Tais and wondering if I had died or something. 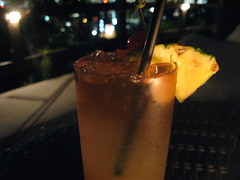 Finally I joined them, all flustered and thirsty. They had scored a lovely sitting area overlooking Hollywood, a 600-year-old pagoda and a pool. The night was just gorgeous. And after I calmed down I ordered up a Norman’s Mai Tai ($12) which is made of Tommy Bahama Dark and Light and Norman’s mix. Created from a 40-year-old recipe and named after Yamashiro’s first bartender who had brought the recipe over from Hawaii, I found that it hit the spot — sweet and potent, but not syrupy. Yum.

The odd thing, well at least to me, is that they don’t have any aged rum here. At least when I went back in July. Rather the most “exotic” rum they carry is Myers’s. I dunno, I figure if you’re going to do Mai Tais and have that sort of theme going on, maybe invest in a decent rum selection.

So looking back on that night and thinking about sitting out on that couch now on a cold December night seems so unappealing brrrrr!, but at the time it was a warmish summer evening. I was wearing a light cardigan and the cold drink served to sate my thirst.

However, if you insist on getting a load of that gorgeous view and drinking under the stars, fortunately for you the bar is still open even now. And every Wednesday they host a December Double Features night where you’re invited to cozy up under the heatlamps and under blankets that are provided and enjoy a featured cocktail and sushi roll in the garden theater.

Movie night is free but they recommend that you make a reservation.