Persimmons Crumble Recipe: So Easy, a Crackhead Can Do It 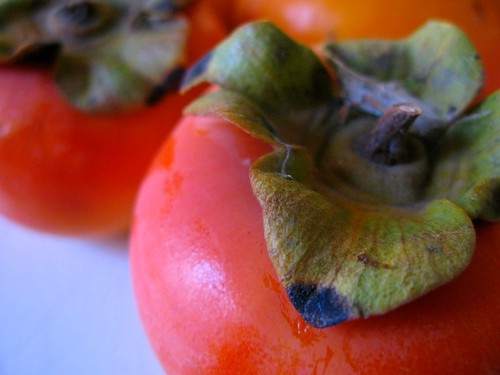 I love love love to eat but am not all that crazy about cooking up my own stuff. Lazy, ya see. But since my parents have a couple of persimmons trees, my last visit with them left me with two huge bags of Fuyu persimmons. What to do?

I wanted to make something desserty with it but it seemed that called for the other persimmon variety, Hachiya, which is softer and pulpier. Plus, as I said, I’m a stranger in my own kitchen. Fortunately my sister sent me the link for an easy peasy fruit crumble recipe. So easy that even I could do it. Apparently you can use this with any sort of fruit just as long as it’s not frozen fruit.

After the jump is my recipe that I’ve adapted since the original recipe called for the use of a 9-inch glass pan or 8x8x2 pan and I only had a 14(?)-inch-long pan. 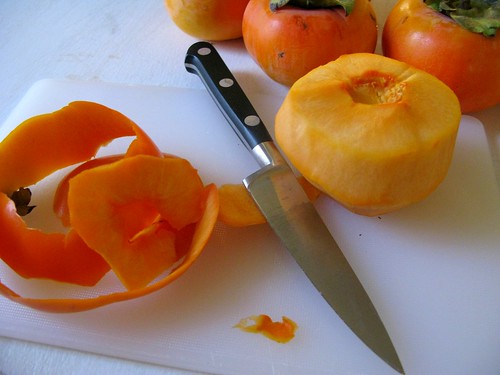 The recipe calls for 5 cups of fruit and I ended up peeling and cutting up eight persimmons. This was actually the “hardest” part of the recipe! FYI, I used a smaller knife to peel the fruit. That big one in the picture was just for cutting up the chunks. 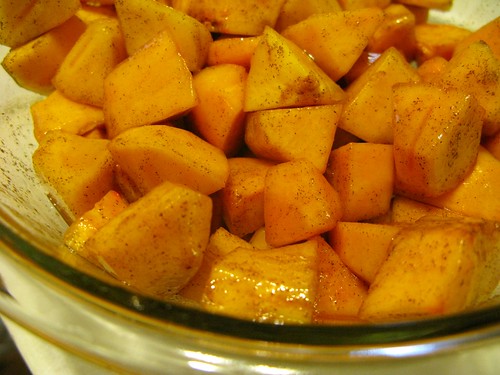 Combine with honey and cinnamon.

Combine the chunks of fruit with the honey and 2 teaspoons of cinnamon. Mix and pour into the pan. 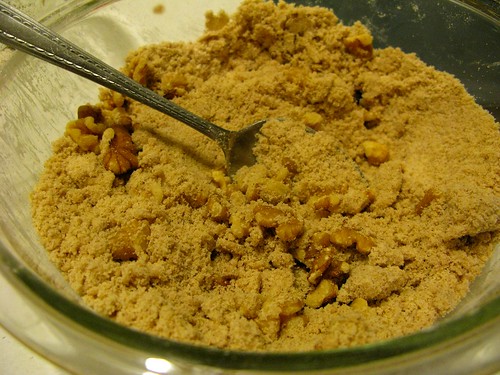 Mix the brown sugar, flour, 1 teaspoon of cinnamon and salt together.

For the crumble, in a separate bowl mix the brown sugar, flour, 1 teaspoon of cinnamon and salt together until the mixture is fine. Add in the walnuts and mix in thoroughly. 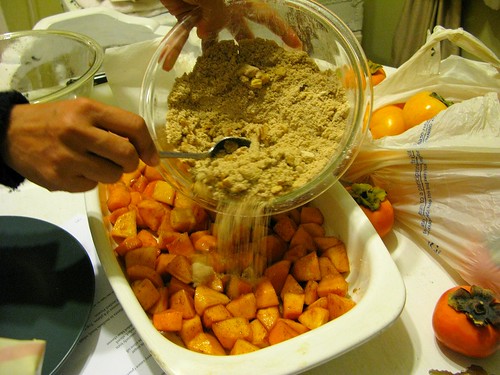 Pour the mixture on top of the fruit and bake in a preheated 350-degree oven for 50 minutes. 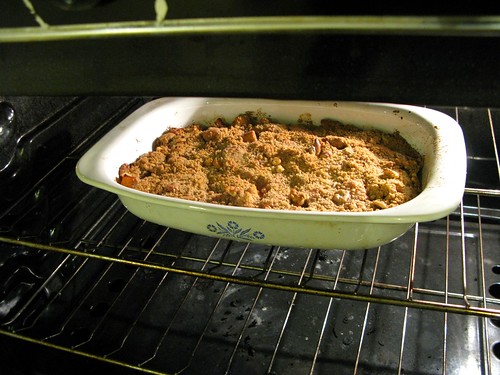 The fruit didn’t really bubble for me as the original recipe had said it would. But that might just have been because of the nature of the fruit, which wasn’t exactly mushy after being baked. However, the spices combined with the sweetness of the persimmons made this a hit at the Thanksgiving eating extravaganza I took part in the next day. It definitely stood out from all those yummy pies, if I do say so myself.

Since this dish is best served warm, I just heated it up in a 200-degree oven for a bit while everyone was finishing up their dinner. Plated it up with some vanilla ice cream, and tasty goodness!

I’m definitely going to make this again for the folks when I visit for Christmas.