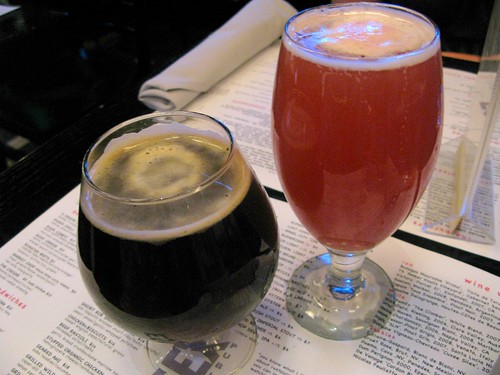 Post 1 of 25: OK so way back in October 26 I was invited to check out the beer cocktails at Essex Public House. Something I was looking forward to trying ever since they were first mentioned on the restaurant’s grand opening press release. I’ve been to Essex a couple of times before and while I had always enjoyed the food — mmm Figs in a Blanket! — I never got a chance to try out the cocktails.

But on this night I was hooked up with not only the unusual beer concoctions on the new menu but even some off-the-menu beer-y goodies. Yay! I was excited about these because beer cocktails aren’t something you usually see on a cocktail menu as hard-core drinkers usually seek something with more kick while teetotallers find them too potent. But I find this in-between of beer and spirits a fun way to ease into a night of drinking.

Out of the two regular beer cocktails, the instant favorite was the Ginger-Ale ($11) which was so refreshing and light and didn’t taste like beer too much. It’s perfect for those who want to get their buzz on but aren’t that crazy about the taste of alcohol. The recipe for you to try it at home after the jump.

Mix in a metal tin and pour over a full glass of Hoegaarden Belgian White Ale.

And it shouldn’t be a surprise that I also fell in love with the Espresso Bi-ru beer float ($12) which was a sumptuous creamy dessert with rich coffee and chocolate flavors. It’s possibly one of my fave beer floats ever. Right up there with the Requiem Espresso Stout one I had at Golden State right after that huge beer dinner at Animal. Oddly enough beer floats aren’t that popular at Essex. Perhaps they’re just too “weird” for the Hollywood crowd? Or maybe by the time people gorge themselves on the comfort food, they just have no room in their stomachs for a rich beer float. Shrugs.

Here’s a quick (and dark) video of bar manager Dave Foss making the Espresso Bi-ru. So easy, you can make it yourself. Just fill up a pint glass with some vanilla Oreo ice cream and pour the Hitachino Espresso Stout over it oh so slowly.

But hands-down, my off-the-menu favorite was the beer cocktail that I like to call the Stout Russian. A murky mix of Rasputin Imperial Stout with vanilla vodka, it tastes just like a light Black Russian cocktail. Bar manager Foss figures it has about 10% alcohol content so you can still get a decent buzz from it.

Needless to say these would be a great way to start your evening in Hollywood. Dinner and beer cocktails before some fer-serious barhopping.

BTW, Essex has just kicked off new karaoke night on Mondays which go off every night from 10:30pm to close. For karaoke, a little liquid courage never hurts, right?