I was among several bloggers and media types lucky enough to be invited to sample the world’s strongest beer as verified by the Guinness Book of World Records. It’s Samuel Adams’ new limited-edition Utopias — an “extreme” beer which is released every odd year — and suffice it to say I was so looking forward to tasting it as well as finding out what a 27% ABV beer would do to me. On average beer usually has 4 or 5% ABV and my fave beer, St. Bernardus ABT 12 has 10%. So would that mean it would take one 2-ounce serving of Utopias to do to me what two and a half servings of St. Bernardus does? I’d find out soon enough.

The beer dinner was held at meat lovers’ paradise, Animal Restaurant, on Fairfax where Chefs Jon Shook and Vinny Dotolo created an appropriately hearty menu which was then paired with a variety of Samuel Adams beers. The Utopias was saved for the end of the meal.

During the dinner, Shook introduced each course detailing what about the designated beer inspired him to come up with each dish, while Sam Adams master brewer Bert Boyce went over the tasting notes of each brew. 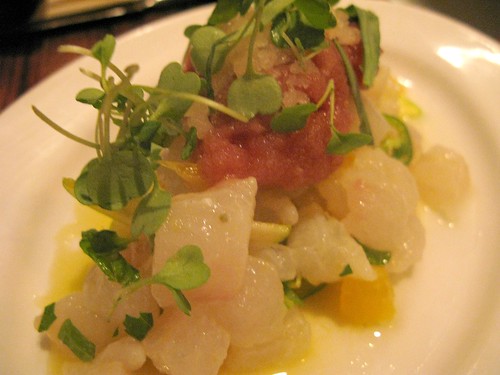 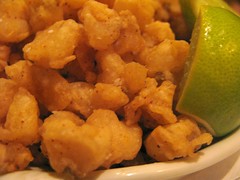 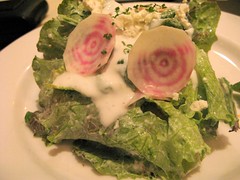 First course: Fluke, grape and yuzu granita, apple, orange, serrano, mint; crispy hominy and lime; salad with lettuce, beets, avocado, pita, feta, creamy sumac paired with Samuel Adams Coastal Wheat. The new brew Coastal Wheat had a bright, citrusy character and went well with the light opener. The fluke brought out the lemony flavor of the beer. The hominy didn’t have much to it but rather tasted like fried bits, while the salad tasted fresh and went well with the beer. 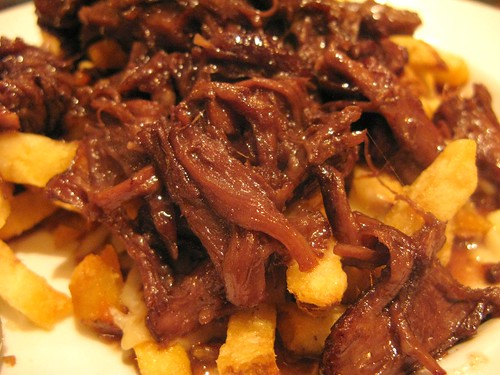 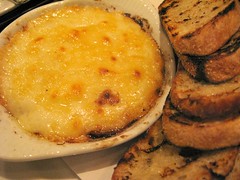 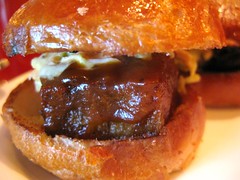 Second course: Barbecue pork belly sandwiches, slaw; melted petit basque, chorizo, grilled bread; poutine, oxtail gravy and cheddar paired with Samuel Adams Cranberry Lambic. My favorite dish had to be the poutine which is just so sinful but I couldn’t tear myself away from it. Its fries still had a crunch to it. The basque’s savoriness matched the sweet aspect of the Lambic but I wasn’t feeling the pork belly sandwiches which just seemed fatty. Its sauciness canceled out the sweetness of its beer pair. I hit a wall here and I hadn’t even hit the main course yet. Oy.

Main course: Ribeye roast, escargot butter, mash, brussel sprouts paired with Samuel Adams Boston Lager. Sad to say this was my least favorite dish since it was the biggest portion as it was probably one of the first ones cut. Must have been a 14-ouncer! It came swimming in butter with a couple of escargots sitting atop it. The meat of the ribeye was fatty and salty. Fortunately, however, its accompanying mash was so yummy and buttery that I was able to use it to chase down the earthy snail. I had tried to push the other snails on my dining companion H.C. but he didn’t want anything to do with them either. I wasn’t crazy about the paired beer, Boston Lager, either, which was too hoppy for my taste. That beer, too, was offered in the biggest portion of the evening, arriving in a pint glass. 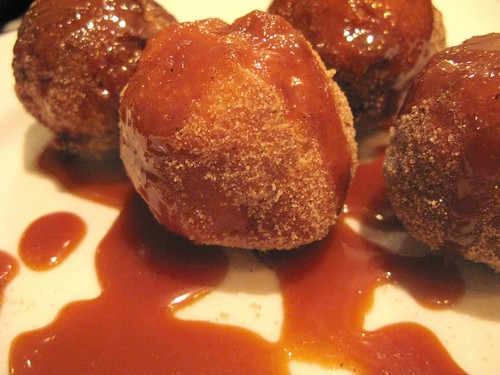 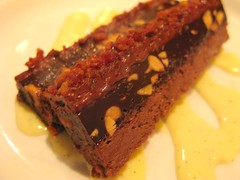 Dessert: Panna cotta, saba; bacon chocolate crunch bar, s&p anglaise; Joe’s doughnuts, cinnamon sugar and caramel paired with Samuel Adams Holiday Porter. I LOVED the doughnuts but how can you go wrong with warm and soft fried bits of dough rolled in cinnamon sugar and drizzled with caramel? Nommy! The crowd favorite chocolate bacon bar was well matched to the porter for its salty, sweet richness. However, the porter had quite the opposite effect on the creamy panna cotta, whose yumminess was harshed away by the porter. 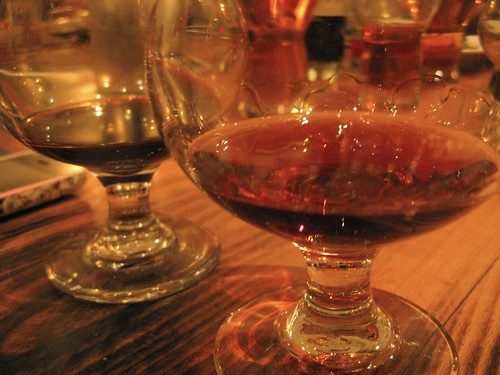 After dinner tasting: Samuel Adams Triple Bock (1994) and Samuel Adams Utopias (2009). The 15-year-old Triple Bock smelled startlingly like soy sauce but tasted like port while the Utopias smelled caramelly and tasted like a cognac. Both had a spirited taste; and none of the characteristics you usually expect with a beer. We sipped them from a snifter rather than guzzled them from a pint glass. They left a warm feeling in my tummy instead of causing me to belch. Smooooth!

It was an epic meal that I hadn’t prepared for. I thought we were just gonna taste some beer with some small plates. So I didn’t clean off every single dish or polish off every single glass but consumed just enough to get an impression of each course and beer.

I discovered that, yes, I love poutine as much as I tried so hard not to — I have enough bad habits as it is. That chocolate bacon sometimes isn’t necessarily as dreamy as it sounds. Was m’OK here and salty. And that for sure I do not like escargot even when it’s sitting on a steak and drenched in butter. But the most interesting thing I learned, apart from the fact that my tolerance is a lot better than I thought, was that beer can be stored and vintaged and priced like wine. That a bottle of extreme beer like this Utopias can sell for as high as $300 on eBay!

I was sorta bummed that we each weren’t given a bottle to take home as is sometimes the case in media dinners. But once I found out that the retail price for this baby is $150, I completely understood. Oh well, I’ll put it on my Christmas wishlist and hope for the best. BTW, you can find it in limited supply at BevMo. Heh.
**
Other Animal/Utopias coverage:**
Franklin Avenue
Gourmet Pigs
Street Gourmet LA