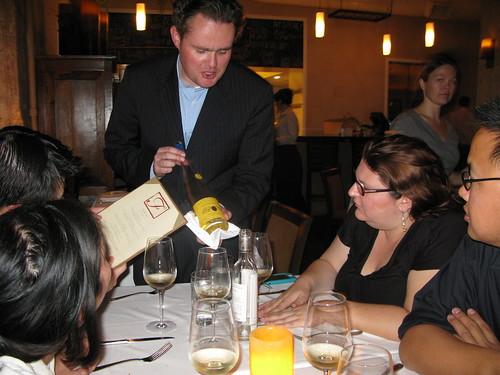 Leave it to foodie Web site FoodDigger to host yet another epic blogger dinner at a much-buzzed about restaurant. The one before that was at BondSt and next month’s will be at Ludo Bites in Royal/T Cafe. OK, I was supposed to have written this post weeks ago when the Santa Monica Italian restaurant Riva, not even a year old, had just transformed into the beachy outpost of rustic French/Italian Fraiche. But, what can I say? I’ve been a busy girl.

Anyway, yes, I was among seven lucky bloggers invited to the intimate dinner at the “new” restaurant, enticed with the promise of a wonderful tasting menu created by Chef Sydney Charles Hunter III as well as an enjoyable evening with some old friends and new ones — Julie and Lindsay of LAist, Esther of estarLA, Maya of ShopEatSleep, Kevin of kevinEats and Ryan of Only Eat What Feeds Your Soul as well as FoodDigger guys Will and Marshall.

Now, I’ve always considered Fraiche in Culver City, and Riva for that matter, too pricey for a casual dinner. They are “special occasion” restaurants, not that that’s a bad thing. It’s just that I don’t regularly patronize eateries with $20+ entrees unless I’m celebrating an anniversary, ya know? But I have enjoyed Fraiche Culver City’s bar menu as well as Riva’s pizza so had no doubt as to the deliciousness and high quality of the food. Plus the Interwebs was a-buzz, for some reason, about Riva becoming Fraiche. “What’s the big deal? There’s just one in Santa Monica now,” I thought to myself. But the kicker here is that Chef Jason Travi, the man behind the CC location, isn’t the man behind its new location.

Nope, as I had mentioned before, it’s Chef Hunter, an Angeleno who has had culinary training at  the California School of Culinary Arts Cordon Bleu Program, tutored under Chef Ludovic “Ludo” Lefebvre at L’Orangerie and manned the kitchen at Bastide. At dinner he introduced himself and conveyed his happiness at having been entrusted by Travi to handle the new Fraiche. He promised to keep the food in tradition with Fraiche but injected with new flavor.

The smallish plates tasting menu Chef Hunter created for little ol’ us was definitely drool-inducing just in description alone while Sommelier Iaian Walling rose to the challenge of providing us with awesome pairings to complement each delicacy. 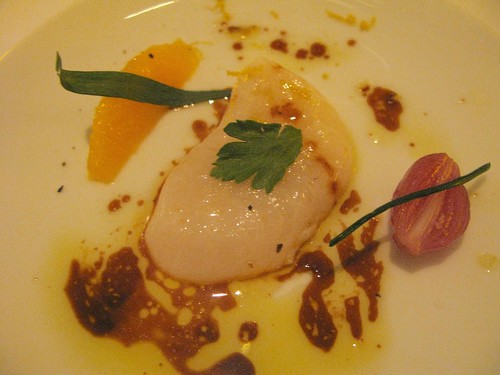 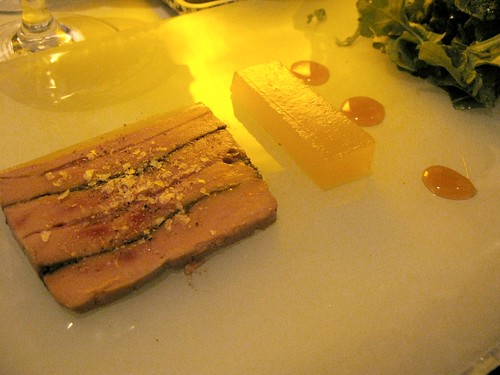 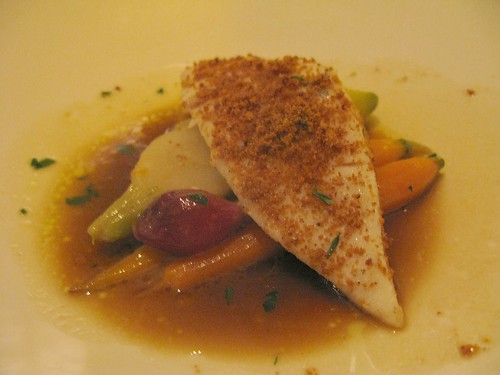 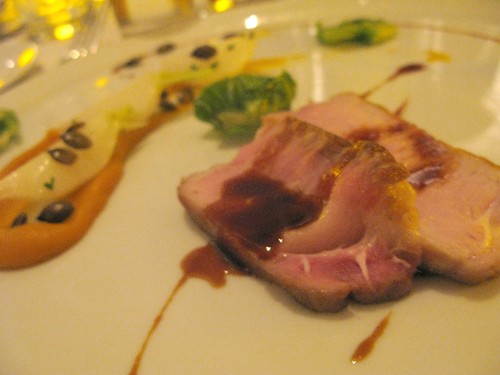 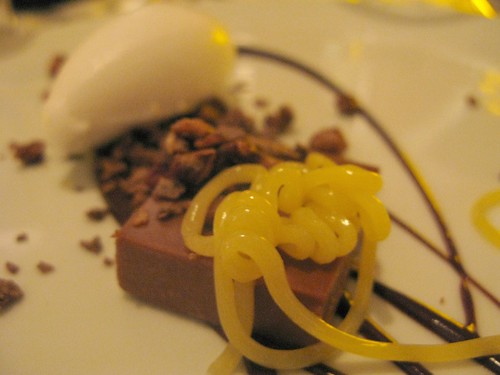 Suffice it to say, everything was phenomenal with my favorite dish being the impromptu off-the-tasting-menu halibut with paddlefish roe over cauliflower caviar, peas and chanterelles which was so creamy. However, everyone else at the table seemed to love the foie gras terrine the most. But I’m not big on foie gras…unless its served in a squid ink Croque Monsieur, so couldn’t share their enthusiasm. Naturally, the chocolate dessert was my second favorite dish but I had had it before at the restaurant when it was Riva so it wasn’t new to me. Still creamy and rich, though! And its pairing with the fruity beer cocktail was inspired.

Speaking of cocktails, in between the dishes and wine pairings, I was able to sneak a couple of cocktails as well. I just had to! With unusual-sounding cocktails like Candy Cane, Ho! Ho! Ho! and Le Notti Bianche, I thought I had stumbled onto the Jones Soda version of a cocktail menu.

I went for the Cold Turkey cocktail ($12), which had a promising and unusual mix of bourbon, pumpkin butter, carrot juice and nutmeg. Weirrrrd, huh? Actually it wasn’t all that weird since it simply ended up tasting like spiked carrot juice. Meh. And even though Will of FoodDigger kept trying to push the Winter Sage gin cocktail on me — good man — I just had to try out the Van-Hattan ($11), a vanilla Manhattan of sorts which I’ve always seen and wondered about at the Culver City location. It consists of bourbon, vanilla, chai and sweet Vermouth, and although I love vanilla and Manhattans, I wasn’t really feeling this spicy hybrid. I think I’ll just stick to regular Manhattans from now on and make sure to ask for it stirred, since they’re prone to the shaking syndrome here.

This new Fraiche seems well suited for Santa Monica. Like Riva, it offers a non-snobby fine dining option for tourists who remembered to pack going-out clothes as well as Third Street Promenade shoppers looking for something more than chains and barestaurants that’s not too far from the outdoor mall. Yes, I will miss the pizzas and the slightly brighter lighting of the previous restaurant but since I hardly knew it as it was only there less than a year, I’m not too heartbroken over it. Riva? Riva who?