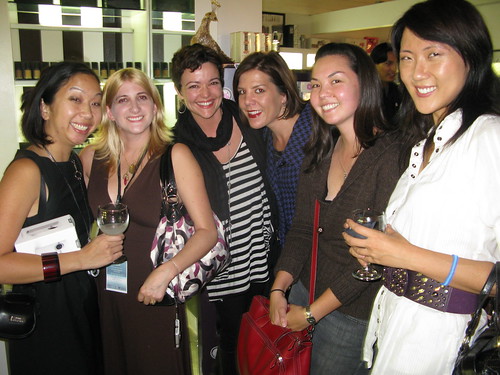 When Caroline invited me to the code.ai beauty event at Fred Segal my initial reaction was “meh” until I heard a few words that DID catch my attention “cocktails and hors d’oeuvres.”  The event was the launch of code.ai, a new product that claims to extend lashes and brows. You might ask, “Isn’t there already a product that does this?” But code.ai has a few major differences from Latisse. 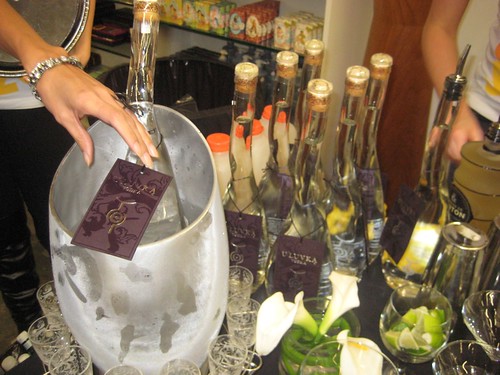 work in the pharma industry), but when I saw When Tara Met Blog‘s bushy eyebrows (yes, they ****make a brow booster, too), I was sold! I also liked that the code.ai Web site provides full disclosure of the purpose behind each of their seemingly mysterioso active ingredients. Ever wonder what diethanolamine does? Go to their Web site and find out!

The event itself was at the Studio at Fred Segal. U’Luvka Vodka was shaking up lychee martinis that I actually enjoyed quite a lot! It didn’t have any of that harsh bite of cheaper vodkas and the lemon zest garnish was a perfect complement to the sweetness of the lychee. I was majorly digging this drink.

The only drawback was that both Caroline and I didn’t even feel a slight buzz after three of these babies. So we headed to the back of the Studio where La Parra Loca Sauvignon Blanc – Verdejo was being poured. I’m more of a red wine gal, but I actually thought this white was pretty good and

After getting adequately boozy, we got makeovers courtesy of Le Metier De Beaute (pronounced “leh meh-tee-ay deh byoo-tay”). My makeup guy schooled me in what makes them so special. Apparently all their powders and shadows are “quadruple milled” as opposed to the double or triple milling of traditional makeup allowing for a finer grained texture and smoother application. And their liquid eyeliner is made by the same folks as Mont Blanc (you know, those $200 pens).

The prices of the different products ranged from $40-$70 which is probably a bit more for a non-makeup-wearing gal like me, but if you’re into the fancy stuff like Chanel and La Mer, it’s probably very reasonable.

After we got all prettied up by the makeup artists, we jumped at the chance to get our brows groomed by celebrity eyebrow threader Marco Ochoa. His clients include folks like Khloe 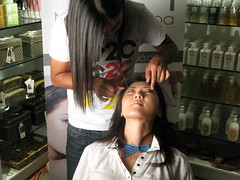 Kardasian and Janice Dickinson. I was slightly taken aback by handsome Marco and his perfectly straight and flowing hair. But once I sat in his chair, I knew he would take good care of my brows. The process is so much less painless than waxing and it lasts longer, too.

I was a bit peeved when a beautiful young Latina gal interrupted my threading session to chit chat with Marco in perfect Spanish, but in researching this blogpost, I realized that she was the Fernanda Romero of Telemundo fame.

Once I was finished, all I could say was “Wow, my eyebrows are so…symmetrical!” I was definitely digging my new brows and wanted to squeal like a little girl! You can make appointments with Marco at Vert salon on Abbott Kinney.

The entire event was also a fundraiser and awareness-raiser for Stand Up To Cancer (SU2C), a non-profit organization supporting advances in cancer research and funding. It is headed up by a 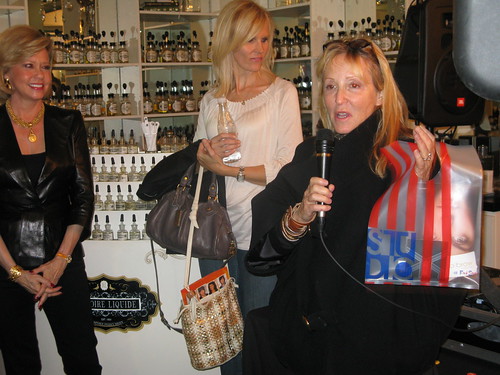 Hollywood bigshot producer and cancer survivor Laura Ziskin who produced a few little movies you may have heard of called Spiderman. One woman shared her tale about how she lost all her eyebrows and eyelashes during chemotherapy and how code.ai helped restore not only her lashes/brows, but also her dignity.

On our way out, they gave us a little goodie bag with a small sample of code.ai’s Brow Boosting Shaper product. We’ll see how that goes!