Ludo Bites Pops Up at Royal/T Cafe This December 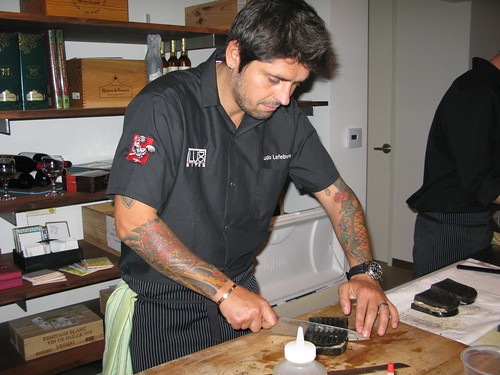 If you’ve never heard of Chef Ludo Lefebvre (or just @chefludo to his tweeps) before, well, I think it’s about time you crawl out from under that rock, my friend. Quick rundown: He was executive chef at L’Orangerie and Bastide, was nominated by the James Beard Foundation for the Rising Star Chef Award and has appeared on shows like Top Chef Masters and Iron Chef America.

The man is a genius and you really shouldn’t deprive yourself of his cooking a moment longer. Because he alone had the power to turn me off food other than his own for several days after I had dinner at his Ludo Bites pop-up restaurant at BreadBar this past August. I’m saying that his unique culinary creations were so mind-blowing, delectable and nommy that the day after I didn’t feel like putting anything in my mouth that wasn’t a foie gras black Croque Monsieur. I wanted to continue to enjoy what I ate instead of just eating cuz I had to.

Anyway, I had enjoyed a scrumptious dinner with fellow bloggers and just didn’t have the heart to write about it after because what would be the point when the pop-up restaurant was going away the next day? That would have just been a mean thing to do to you.

Fortunately, Chef Ludo is now popping up somewhere else! At Culver City’s Royal/T Cafe next month. You probably know it better as the “Japanese maid bar.” Well, Ludo and Royal/T’s curator Jane Glassman will join forces for 13 short days of dining and art. The art exhibit “In Bed Together” will serve as the backdrop for your foodgasmic experience. And believe me, it’s foodgasmic. So, if you haven’t yet tried out his food, better make your ressies now while they’re still available.