Absolut Boston: Why Boston Is Luckier Than L.A. 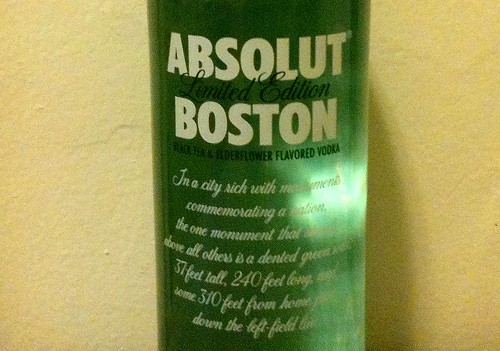 It’s no secret that I’m not a huge fan of vodka; bourbon being my spirit of choice. But when I received a bottle of Absolut Boston to try out, I was pleasantly surprised. The third in the series of American city-inspired flavored vodkas by Absolut, it’s flavored with elderflower and black tea and possesses a subtle perfumeyness that fans of black tea will love but that isn’t off-putting or overpowering. And the best part, at least for me, was that it didn’t have that sharpness and awful burn that I detest in vodkas. I dared to even drink it neat (tasty!) and also found that it mixes beautifully with ginger ale.

Absolut Boston is definitely my favorite out of the three city vodkas. And I’m kinda jealous that Beantown inspired the best-tasting one of the trio. The Absolut New Orleans was m’OK with its mango and black pepper flavor but Absolut Los Angeles was berry blech. Elderflower and black tea totally makes sense as flavors representative of Boston, though. You know, tea party and that old metropolitan elegance.

In short, there are better things to drink in this city…but we’re glad to have it in our cocktail mix. And we’re glad Absolut didn’t try to do something with baked beans.

But this vodka doesn’t only celebrate Boston in taste, it will also donate a portion of its proceeds to the Charles River Conservancy, a Boston area charity dedicated to the stewardship and renewal of the parklands along the urban riverbanks. And the bottle design, a simple seafoam green square honors the city’s own Green Monster, Boston’s famous left-field wall at Fenway Park, because you know what rampant sports fans those Bostonians are.

In any case, this vodka would work great in vintage-inspired cocktails (a little Lillet perhaps?) to keep you warm at holiday parties or simply on the rocks alone and at home.

At a scary movie night on Halloween,

I was amazed what a big hit it turned out to be with my friends. All I did was mix it with some ginger ale on the rocks and they just couldn’t get enough of it. “I’d like some more of that delicious drink,” was a popular refrain that evening. You’d think that I did some magical mixology and invented the best cocktail ever.

If you’d like to try something a little more fun and involved than add a mixer, here are some of Absolut’s own cocktail recipes created by its in-house master mixologist Jamie Gordon:

Shake Absolut Boston, lemon juice, and simple syrup with ice, strain into a martini glass, garnish with a lemon twist.

Serve over ice in a highball glass.

In a cocktail shaker, muddle 2 of the blackberries with the agave nectar. Add the Absolut Boston, lemon juice, bitters and ice. Shake well and double strain into a chilled large martini glass. Garnish with the remaining 2 blackberries.

And fab cocktail blogger and consultant Natalie Bovis-Nelsen, aka The Liquid Muse, also created her own delicious recipe:

Absolut Boston is only available for a limited time at certain liquor stores, restaurants and bars (Bar Lubitsch and The Edison plan to carry it) and is supposed to retail for $24.99. However, it’s hard to find online and people on eBay sell it for anywhere from $29.95 to $69. West L.A. stores, the Wine House has only about 20 bottles in stock for $31.99 each and Wally’s Wine in Westwood has it for $35.99. And Mel & Rose in West Hollywood has it for $34.99.

Speaking of Absolut, c****heck out its televised mixology competition, On the Rocks: The Search for America’s Top Bartender, that pits our nation’s finest bartenders against each other. The handsome Joe Brooke of Copa d’Oro is representin’ L.A. Go, Joe! The first of 12 episodes airs on NBC this coming Sunday, November 8 at 1am after Saturday Night Live. Weekly challenges for the bartenders include flair bartending, dessert pairing and something called “Pool Party.”