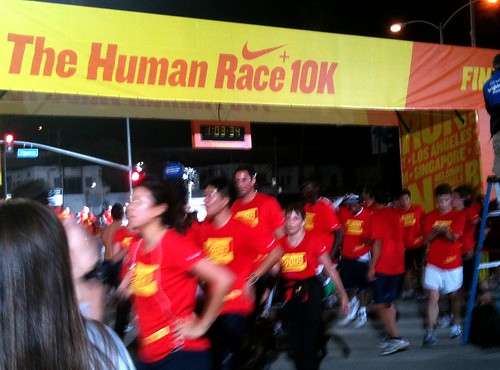 I’ve wanted to run the Nike+ Human Race since it replaced the Nike Run Hit Wonder fun runs and I especially liked the idea of the whole world (well, 30 cities around the world) running together on the same day.

But since the official Nike+ Human Race in Los Angeles was 1) at USC (Go Bruins!) and 2) at midnight, I decided to get my own run going. That was the beauty of the Human Race. You could run wherever you wanted whenever you wanted just as long as you tracked your miles with your Nike+ and did it on October 24 AND you wouldn’t have to pay a 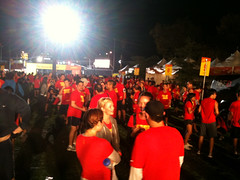 So a month before the race, I assembled a team of running blogger friends to join me for a morning run along the beach in Santa Monica that Saturday, after which we would enjoy brunch at Gjelina. It was going to be so fun!

It wasn’t until a week or so before the actual event that I got approached by someone representing Nike asking if I wanted to cover the event — Twitter and/or blog it. The incentive for that? Free race registration, running gear, a Nike+ Sport Kit or Sportband, VIP tickets to the tailgate party before the USC vs. Whomever game the next day as well as tickets to the game itself. Who’s going to say no to that? (Except the party and game part for me.)

But I had to check with my blogger friends first to make sure this was something they wanted to do. The Nike rep said that they were welcome to join, too. After I told them what they’d get for running at midnight instead of at the beach, they were in. So we all got hooked up.

On Friday, the day before the race,

we were each messengered a huge box o’ stuff. I scored a white baseball cap, sports bra, long sleeve zip-up, Nike+ Sportband and running shoes! It felt like t 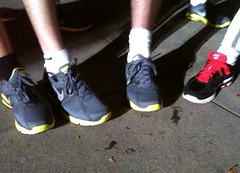 he best birthday present ever and effectively pumped me up for the event that night. Which I really needed because after work I was exhausted.

It wasn’t until we arrived at the campus which was populated with runners in red shirts that the excitement hit again. And since it was so late at night, it almost felt like a huge party. I even heard that some folks got drunk before the race. Crazy bastards. But then again, I shouldn’t talk as I had “carbo loaded” on a flight of beer at the Lab down the street just a couple hours before.

The start line area was packed (post-race tally says there were about 8,500 runners) and organized by pace times but there was just no way I could get even near mine. For one reason or another, I lost my friends in the chaos so it was just me and Josh of Food GPS. But since he started running when he was in high school, I knew that keeping pace with him would be tough. But it was good to run with someone in the beginning, especially since the first mile was a CF and consisted of walking in a herd like cows. The following mile we were dodging walkers and slow runners. Move to the right, people! 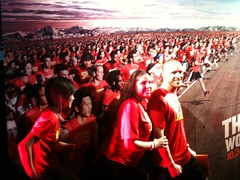 line. There was no way I could keep up this pace and not end up walking later, which I refused to do, so I told Josh to go on ahead. And boy, did he. He can run fast!

I did the rest of the run by myself, which I prefer anyway. Kept a good pace and my new Sportband, which I LOVE btw, said that I was running an 8:30 minute/mile but I think it might have been a minute faster.

The course around the campus was flat for the most part with occasional imperfections that unfortunately tripped some people. It would have been good if there were some flags or orange cones calling attention to that cracked asphalt at the bottom of that small crest as I saw one person take a bad spill. For the most part, though, the road was lit up. Flood lights, however, were aimed at the runners, blinding us. How about pointing those babies up to the sky next time?

I also wasn’t crazy about the loud music from the occasional MC, DJs, bands at various points on the course. I can see them wanting to motivate us but did they have to turn the volume up to 11? My friend Shelley, aka Faux LA Hipster, liked it though. But then again she likes clubbing.

When I saw a bank of flood lights, I knew I was at the end of the 10K so I kicked it in. There was someone in my peripheral who started running faster, too, so I notched up my speed and beat them to the finish line. Huzzah!

Once on the other side of the line I wanted to take a picture of it but the volunteers there were trying to prevent people from clogging up that area so moved me along. However, they didn’t tell us that we had to go all the way around to the side to get our medals so I missed out getting one. But fortunately when I ran into Andy and Lisa of LAist they gave me one of theirs. It’s not really a medal so much as it is a dog tag and it says “USC” on it but I still loved it anyway. Hey, I worked hard for that.

After the race, the runners enjoyed the DJs, freebie waters and snacks and socializing. I stretched for a bit and then reunited with my friends — H.C. (LA and OC Foodventures), Josh and Shelley. It was now about 1:30am and I had just run 6.2 miles. Kuhrayzee!

Would I ever do a late-night run again? Well, even though running so late was kinda difficult, I think I would do it again because I’m just crazy enough to. Definitely fun for the novelty and the camaraderie but if you’re hard-core about your time, probably stick to running on your own.

Last photo by H.C. of LA and OC Foodventures