Whisky Live: Drinking Around the World in 3 Hours 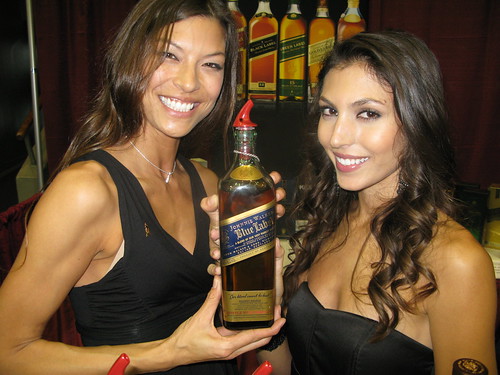 Creme brulee, caramel, espresso, pralines, prunes. Before I attended the Whisky Live event this week, my default descriptors for good whisky were “smooooth” and “yummy!” But after getting the chance to talk to the reps from such distilleries like Bushmills, Four Roses, Glenlivet, Johnnie Walker and Macallan, to name but a few, and try a vast variety of whisky, I’ve actually managed to expand my vocabulary. Woo hoo!

Last Tuesday, me and my blogfather, Michael, were lucky enough to gain VIP entrance to the Whisky Live event at the Santa Monica Civic Auditorium. There I ran into not only some of my favorite online personalities like Lesley of Tasting Table and Dawson from Yelp but old friends like H.C. of LA OC Foodventures and John of Social Domain as well as booze community big shots like Vincenzo Marianella of Copa d’Oro and Christina Perozzi, the Beer Chick. We were all here for the same purpose: to partake of and enjoy the different whiskies in attendance.

Since I arrived early for the VIP hour, I made a point of hitting up all the premium whiskies first since I was told that they would only be served in that first hour. It was like a game show shopping spree running from table to table hunting down Johnnie Walker Blue, Glenlivet 25 and Bunnahabhain 25. Fortunately, everyone had signs.

What was cool about this event was that although it’s considerably smaller than San Francisco’s Whisky Fest, which boasted over 90 vendors to the 30-plus here, they made use of the space so I never really felt crowded in. They had drink tickets to make sure they could control the amount of pours but, frankly, after the third hour in, the vendors weren’t as strict with taking tickets. Yay!

In any case, I loved being able to ask the reps to explain their wares. And I took some video to help me remember what they said. Ignore that annoying high-pitched voice in the background, though. That’s me. How do you show that you’re listening without saying, “Uh huh” a lot anyway?

So yeah, it was fun getting to try all the whiskies and there was a cigar lounge (with marked up cigars), a Patina-catered dinner, some master classes and even a Highland Park cocktail contest (which I knew Vincenzo would win) to mix things up.

After we picked up our last bit of swag and sampled our last sip of booze it was time to call it a night. I don’t know how many sips I had but at least I was able to walk out of there in a straight line and down to La Grande Orange on Main Street afterward for some sober-up dessert.