My first experience with a circus ever was seeing the PT Barnum one when I was a kid. It was the traditional circus with elephants doing tricks and clowns running around, but even as a kid I was none too impressed. “Poor elephants.” That’s why it took me this

long to finally see Cirque du Soleil, and this Montreal-based company has been around for 25 years! But now after seeing Kooza, Cirque’s newest touring show, last night I don’t know what kept me.

It’s not just a circus with a ringleader directing acts to perform a series of tricks one after the other. Kooza moves the audience through an actual story, where we follow this “Innocent” and his kite as he encounters a colorful cast of characters. We’re exposed to incredible sights and people and grow with this Innocent. But it all begins and ends with a box; “Kooza” is Sanskrit for “treasure” or “box.”

This particular show is a return to Cirque’s origins, combining the two circus traditions of acrobatics and clowns. Yes, there are no circus animals, rather, the humans perform all the tricks, whether it’s magic and illusion or jaw-dropping, nail-biting feats of human strength. I felt like a little kid watching this show, all giddy and clapping as well as oohing and aahing. I found myself saying, “Wuuuut?” and “Oh they’re not going to…oh they ARE!” a lot.

height of the tent and every so often even moved down the aisles among the audience. The clowns, actually not too scary here, interacted with us. Bringing some “lucky” audience members on stage, shooting cannons of confetti at us and making us feel part of the show.

And oh my the acrobatics. There were these three girls (in the above video) who I swear have no spines as they struck extra bendy, excruciating-looking poses. I couldn’t help but wince seeing their bodies contort in such unnatural angles while supporting one another’s weight in human pyramids. And one of the girls actually ran around her own head!

But my favorite act had to be the two daredevils running, skipping and jumping through “The Wheel of Death.” I don’t want to give too much away but suffice it to say they garnered the loudest applause at the end of the night. The thrill with them being that at any moment a simple misstep could have spelled disaster. Eeek! Oh, and I want their rubbery, scaly pants! Yes, the costumes in the show inspired me for Halloween. Now, where can I get my own all-sequin disco ball suit?

In any case, great fun and excitement awaits you at the Grand Chapiteau (aka big top) on the pier which holds 2,600 circus-goers. BTW, I recommend getting seats near the stage if you can. Seems like those seated there have the most fun and, who knows, you might get pulled on stage. 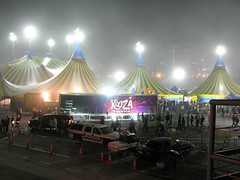 yeah, now I wanna see other Cirque shows, like all those in Vegas! I wasn’t a fan before but am definitely one now and want my bf and my mom and dad to go see the show. They would totally love it.

Bonus: To score discounts and specials around Santa Monica, hold onto your tickets. You’ll get to enjoy goodies like free bubbly at Pourtal Wine Tasting Bar, a $20 three-course meal at Chez Jay’s or $20 off your $50-plus bill at Border Grill just for brandishing your ticket.

And word to the wise: Eat before you get to the Cirque as, like in a movie theater, the price for food here is marked up, like $11.50 for a bucket of popcorn and soda and $12 for a hot dog in a baguette. Yikes!