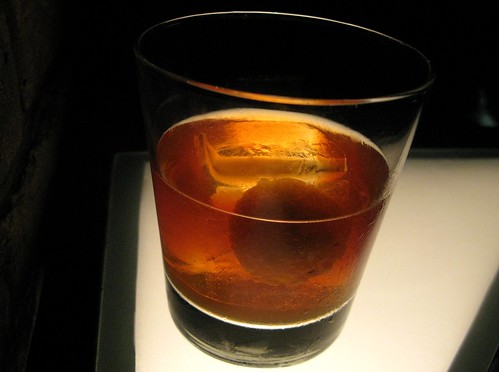 Forget about dietary do-gooding and sinless sipping; when I’m in New York, hell’s yeah all bets are off. Especially when it involves deep-fried bacon-wrapped hot dog slathered with kimchi and cocktails made by famed mixologists in New York City.

With Lindsey and Dave of Live the Lush Life as my guides, I gained entrance into two of the best bars for cocktails in the city, favorites of even mixologists in L.A. like Roger Room’s Damian Windsor and The Edison/Varnish’s Marcos Tello. 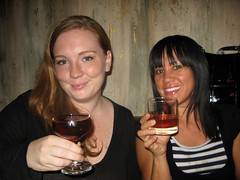 At Death & Company, a speakeasy-esque bar in the East Village, we were able to score a table for our crew of six by getting there in the early evening. Another bonus was that famed mixologists Joaquin Simo and Alex Day (who did one of the Edison’s Radio Rooms earlier this year) were manning the bar. According to Lindsey, you can’t ask for a better combination at Death & Co. Sweet! We were in good hands.

A scan of the extensive menu, which is categorized by spirits, revealed some tasty-sounding cocktails but I started things off with the

Oaxaca Old Fashioned ($13): El Tesoro reposado tequila, Los Amantes Joven Mezcal, agave nectar, Angostura bitters garnished with flamed orange peel. Our server delivered the pyrotechnics of the flamed garnish at our table much to the delight of my family who has never been cocktailing with me before.

This potent concoction, which was created by mixologist Phil Ward, has been on the bar’s menu since it opened up back in 2007 and was written about in the New York Times and listed as one of the best cocktails in the city by New York Magazine, back in the day. But even without its impressive pedigree I would have loved it for its smokiness and scrumptiousness. I definitely sucked this down too quickly. 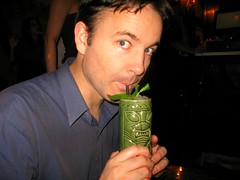 Btw, a drink you can’t suck down too fast here? The Zombie (pictured left). Apparently it’s so kick-ass strong that they’ll forbid you from ordering a second one!

To keep in theme with alternative takes on old classics, next I ordered the Saz Who, a rum variation on the Sazerac with Cruzan Single Barrel Rum, Clear Creek Pear Brandy, Demerara Syrup, Vieux Pontarlier and both Angostura and Peychaud’s Bitters. This tasty delight was created by Brian Miller, master mixologist and one of the best bartenders in the city.

Now, Death & Co. does serve food but word on the street, OK on Yelp, is that it’s best you stick to the cocktails here. So we held off on ordering food til we got to PDT (Please Don’t Tell), a bar down the street that requires reservations (unlike Death & Co.) but is located within the confines of a hot dog hole-in-the-wall.

Fortunately, Lindsey had made reservations for our group which had now grown to eight. Usually six is the largest they accept for groups here, but Lindsey has an in.

We walked into Crif Dogs and Lindsey ducked into the phonebooth located near the entrance and picked up the handset. Within moments a door opened from the other side of the phonebooth where a woman with a clipboard stood. She checked 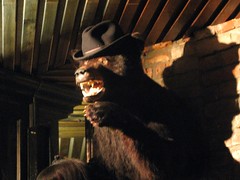 our party off the list and we stepped into PDT, a very low-lit bar with dead animals mounted on the walls.

Back at Death & Co. Lindsey and Dave told us about PDT’s yummiest-sounding Benton’s Old Fashioned which is made from bacon-infused Four Roses bourbon, Grade B maple syrup and Angostura bitters. My family and I couldn’t hustle over to PDT quick enough. What was great about this cocktail was that the bacon flavor was so subtle but you could still taste it. And despite the maple syrup this wasn’t a sweet cocktail.

I would have gladly ordered another one, briefly pondering the Great Pumpkin cocktail, but was too stuffed to add anything else to my stomach contents after my diet-killing dinner of the Chang dog ($6 in the bar, $4 in the restaurant) from Crif’s next door.

This lovely heart attack on a bun was a deep-fried bacon-wrapped hot dog slathered with kimchi. Even though I’ve become a pseudo-vegetarian in L.A., I felt it my responsibility as someone who rarely-if-ever comes across something like this to try this dog. And I’m glad I did. Loved the crunch of the deep-fried meat, the savoriness of that bacon and the spice of the kimchi. Eff the heart burn and the necessary 6-mile run the next day, this was worth all that. 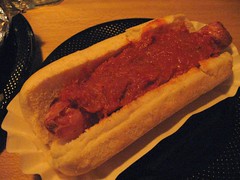 If you asked me which mixology hot spot I liked better — Death & Company or PDT — I’d have to say the former simply because they were a lot nicer at that bar. Well, everyone at PDT was nice, too, EXCEPT the lady with the clipboard. She was snotty and seemed to have it out for us. No flash photography is allowed at either bar but where they told us kindly to refrain at D&C after the second photo, the snotty PDT lady was borderline hostile about it after the first flash, which was a misfire btw.

And when our additional party of two showed up a little late, the woman let us know that we weren’t supposed to have more than six at our table, an allowance Lindsey had already confirmed when she made the reservation earlier that day. H’well! When Lindsey and her party opted to stay and my family and I paid our portion of the bill to leave, the lady told us that she already gave our table away to the next waiting party since she thought we were all closing out, even though we did tell our waitress that half of our party was staying.

Sure, the woman probably just had a bad day. But, her attitude left a bad taste in my mouth, even with the trace amounts of bacon bourbon. Whatevs, though. Still loved the bars which are on my list of must-dos in New York.