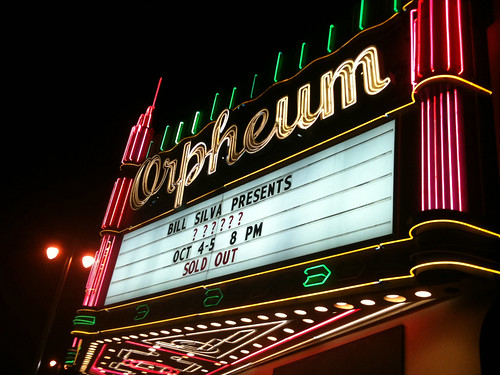 Now, I rarely, if ever, do this but I’ve asked my brother, G, to do up a review of the Thom Yorke concert at the Orpheum in Downtown L.A. last night. G’s a huuuge Radiohead/TY fan so I know he’d do an awesome job of covering it.

Anyway, take it away, G.

Last night at the Orpheum, Thom Yorke performed all the songs off of his 2006 solo album Eraser for the first 50 minutes of the concert. At every moment I was expecting to hear some of the new tracks he has been working on in L.A. with the new band. It left me a tiny bit, uh, let down (couldn’t resist) at first, but they finally played these much-anticipated new songs in the second half of the concert. That didn’t mean I didn’t get to enjoy my favorite tracks from that album: “Eraser,” “Analyse,” “Black Swan” and “Cymbal Rush.” All of the tracks were brought to life in a bass-heavy way gratz to the new band.

You may notice that many recordings online (shot by concertgoers on their iPhones with not-so-great microphones) ended up sounding distorted due to the big beats and bass coming from the speakers. The band Middle Eastern-ized the track “Skip Divided” with Flea playing some exotic flute (the kind to bring out snakes), and the building hypnotic tribal percussion made the crowd wanna writhe and gyrate their hips along with Thom Yorke onstage. 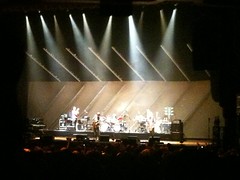 Thom’s got some sexy little moves, too, inciting the females in the crowd to go, “WOO!” with his serpentine dancing limbs. Flea’s trademark bass-slap happiness was hotly evident when they played “Harrowdown Hill”…it was a joy to behold as a long-time-ago fan of the Red Hot Chili Peppers. Having never seen the Chili Peppers play live before, it was a thrill watching Flea burst forth with the same boundless energy he had 20 years ago (!?!) during the Mother’s Milk album. Except this time with a shirt on.

They closed the first set with “Cymbal Rush,” which had built up in intensity when the band improvised a Flea-funky jam session at the end of the song.

The second set began with Thom offering to the crowd, “You can come to our party, if you like.” ::sigh:: He played the first few new songs sans the new band. The first one, a classic beautiful guitar ballad, he said was called either “Moon Upon a Stick” or “Lotus Flower,” a song he said he was currently working on with Radiohead.

The other two piano ballads, “Open the Floodgates” and “Super Collider” (based on Large Hadron Collider?) were the kind of aural gorgeousness you’d expect from the front man of Radiohead, even causing the biggest jerkholes in the crowd standing in front of us (when almost everyone in the crowd finally elected to sit down…OK I won’t go down that negative path) to sway together romantically. 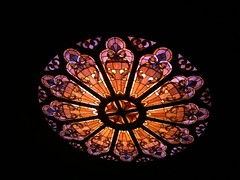 The band returned to Thom’s side for the last few new songs, which were kickass numbers that only made me impatient for the final recorded versions of the new material!

There were a sea of brightly lit recording gadgets in the crowd, so you’re very likely to find this concert on YouTube now (at least until the record company lawyers come and take away all the fun) for viewing.

Seems Thom Yorke has a lot of material stored for the future in remakes/rewrites of songs already released, as evident in two of the new tracks: “Judge, Jury, Executioner” seems to be a sequel to “Myxomatosis” which was on Radiohead’s Hail to the Thief; and the last song on the setlist “Feeling Pulled Apart by Horses,” which according to some fan sites previously was what became “Reckoner” on Radiohead’s In Rainbows.

It’s fascinating to see his (and Radiohead’s) creative evolution over time, and I can only guess what half of these songs mean or how (if possible) they might be linked.

Probably the biggest treat of the night was walking past Colin Greenwood as I went into the refreshments area of the Orpheum theater.  It’s been a long time in my 15 years in L.A. that I’ve been starstruck. OMG I just brushed by Colin — I could see the smile-wrinkles in his face — WOWW he’s human!

BTW, you can check out some of the new songs here on At Ease, a Radiohead fan site.