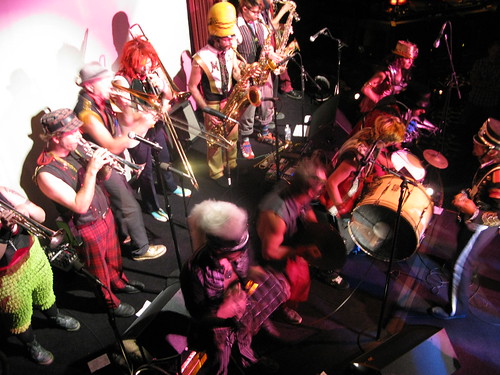 I usually don’t like to review the same place twice but the Edison‘s monthly Radio Room night has changed so much from its humble speakeasy beginnings in the back room of this downtown underground bar that it was just asking for a follow-up.

Yes, now our little baby bar night’s all growns up as it’s transformed into this huuuge event taking over the main bar and drawing legions of cocktail fans. In fact everything is now on a grander scale. No longer do they only feature the best bartenders in town. 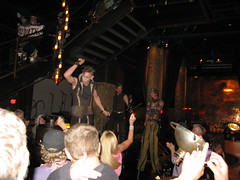 Marcos Tello, the face of L.A. mixology as well as the Edison’s lead bar man, is charged with discovering mixology talent in far-off lands and bringing them back here to show off their skills. A bartender exchange program, if you will. They’ve had the folks from Milk & Honey in New York, Heaven’s Dog in San Francisco and Drink in Boston behind their bar.

Even the live performances are now epic (thus the $10 cover charge when before there was none). No more intimate club settings evoking an audience with Billie Holiday but rather brassy bands, circus acts and ladies with snakes dancing atop the bar. It’s kuh-rayzee!

And that’s why I have to go every month. It’s something different every time! Last Tuesday’s event featured the March Fourth Marching Band as well as “the number-one bartender in the world.” It wasn’t to be missed.

I met up with Erin of LA Weekly for a quick drink but ended up running into a slew of old friends. My girls from my cocktail club — Natalie the Liquid Muse, Silamith of Partida and Martin Miller’s and Rebecca, cocktail aficionado and wife of my fave bartender Roger Room‘s Damian — were in attendance. Naturally Damian was there as well. John of Social Domain showed up followed by estarLA. 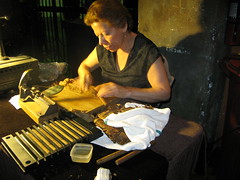 Since the bar has just started selling hand-rolled cigars upstairs (read: street-level) in the smoking lounge, I had to partake. The salesman, borrowed from the cigar store down the street from the Edison, immediately offered up a flavored cigarillo ($5). “It’s cuz I’m a girl, isn’t it,” I smirked. But yes, I did want the small one. At a table nearby a woman rolled cigars ($10 each). “I feel bad saying it, but I rented her,” the salesman said. She didn’t seem to mind. There were about four or five other cigar choices as well as cutters and lighters for sale for the unprepared smoker. One extravagantly sized lighter was $100!

I wished I had brought my cocktail upstairs with me to enjoy with my cigarillo but instead I had thoughtlessly left it with Rebecca and Damian to watch while they also kept mine and Erin’s barstools warm. After I couldn’t be apart from my drink much longer, we returned to the bar.

This night’s cocktail menu offered an interesting selection from The Tuthilltown Punch to an Averna and vodka Charley Horse. I was drawn to the Allspice Sour made with Hudson Rye, allspice dram and egg whites. Twas my favorite of the evening. So spicy and perfect for this cool autumn night. My not-fave, however, was actually the punch which tasted medicinal. I blame the ginger and the cassis.

As the evening wore on, it got more difficult to get a 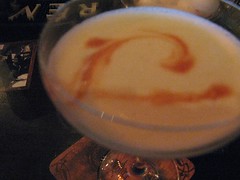 drink at the bar. We had released our bar stools to walk around and scope out the scene but when we tried to get anywhere near the bartenders again, that proved nearly impossible. The human wall that sprung up around the bar was three-people deep and no one was budging. Just as well since I had all that I could drink at this point. But even if I wanted a glass of water, ferget it.

The big drama of the night was when I lost my wallet and scoured the floor around the bar armed with my mini flashlight in search of it. Retraced my steps, asked for Director of Beverages Aidan’s help and shooed people from dark corners where I thought it might be. Fortunately some good soul turned it in to guest mixologist from Portland, Jeff Morgenthaler, who magically produced it when we asked if anyone turned a wallet in. My hero!

But the hee-haw moment of the evening had to be when Barbara, the Edison’s general manager, said, “There’s someone I have to introduce you to.” She took hold of my arm and guided me to this tall gentleman donning a jaunty fedora. We started shaking hands when she said, “This is [insert downtown nightlife impresario’s name here]. And this is Caroline who does a fabulous blog, Caroline on Crack.” The funny part was that this was the guy who had banned me from his bar for doing a writeup of his members-only venue. “Yeah, he already knows me,” I said with a “heh.” Awkward! We didn’t hug it out but at least the encounter didn’t end with hair pulling or thrown cocktails.

In any case, leave it to the Radio Room to make it an exciting evening.

If you’re antsy for the next round the next Radio Room night has been postponed til November 10 due to the Edison’s Halloween blowout.