The Roof Was on Fyah: Thrillist Party at The Lofts @ Hollywood & Vine 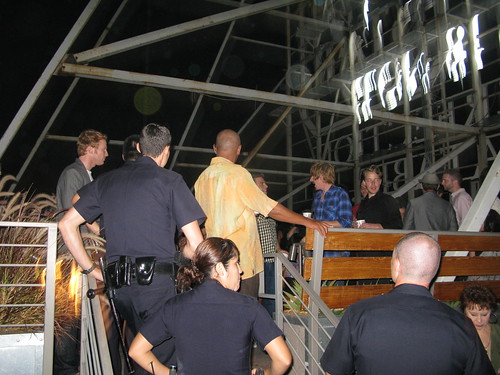 I didn’t care that I didn’t have a thing to wear or that this party was in the heart of the parking hell that is Hollywood during a Saturday night no less. And when I got there, I didn’t care there was a long, slowww-moving line to get in. I just knew I had to get in. Because in this Thrillist Los Angeles City Originals party there were lots of free Newcastle Brown Ale, Yummy cupcakes and to-die-for views of the city. It promised to be awesome.

When my bf and I first arrived, we were feeling pretty good. We just scored street parking not too far away from the venue at The Lofts @ Hollywood and Vine. (Even 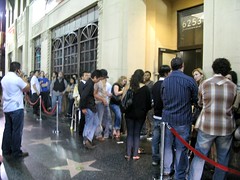 though there was free valet for this event, I didn’t want to be at the mercy of the valet line at the end of the night.) And we had a delicious dinner and beers at the Blue Palms Brewhouse down the street. But as we approached the entrance to the Lofts, we saw the start of the long queue that continued to wrap around the corner up Vine. Eesh.

Undeterred, we marched to the back of the line. “Maybe you should see if you’re on the VIP list,” my bf said, after all, I know the organizer of the party, Jeff Miller of Thrillist LA. But I hate it when people do that: Walk past all the other folks waiting in line, up to the bouncer with the clipboard and name-drop. It’s right up there with, “Don’t you know who I am?”

Well, I held off name-dropping for half an hour. Only getting up the nerve after the line moved up three steps in that time. “Okayyyyy, I’ll just check,” I said to bf, shuffling half-embarrassed to the front of the line. Fortunately I ran into Jeff who had been running around making sure everything was going smoothly. “What’s the deal with this line?” I asked him.

“Oh, you go in this one,” he said, pointing to the shorter line on the 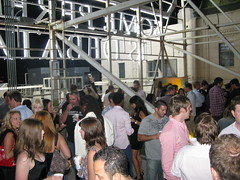 other side of the entrance. “It’s the friends line,” he said with a smile. Awww yayyy!

But even after we got in that one, it still was barely moving. Jeff visited us in line. “BTW what’s this party for?” I asked him since it wasn’t clear on the invite or the Web page. For the lofts? Newcastle? Yummy Cupcakes? “No reason,” he said. “Thrillist in New York throws parties like this all the time.” Cool, nothing wrong with that.

It wasn’t til around 10pm or so (an hour after the party start time) that we finally got to the front of the line. And we think we only started moving because a cop showed up and spoke to the guy with the clipboard. Maybe he didn’t like that the traffic on the sidewalk or that the lines were causing a backup on the boulevard from lookie-loos curious about what was going on. I just thought it was weird that this was even an issue since Hollywood is no stranger to the velvet rope. In any case, I was glad to finally get in. 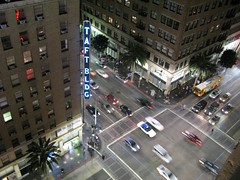 We rode the elevator to the top and then continued to take a series of stairs til we reached the roof which was already crowded. The backside of a huge neon sign softly lit the party, while a dj and some live graffiti art energized the scene. All the seats were taken so instead I took in the gorgeous views of Hollywood at night.

There’s the world famous intersection of Hollywood and Vine, a view of the metro station buried in the new W Hollywood hotel, rows of headlights stretching far down Hollywood Boulevard and all the ant people walking over the stars on the sidewalk. I got snap-happy with my camera because when would I ever get such a perspective again? It was all so purty!

Bf had gone downstairs to investigate where the bathrooms were located and returned with a Yummy blackout cupcake in his hand. I heart him so much! “Where’d you get that?!” I asked while doing my happy dance, as cupcakes were nowhere to be found, at least on the roof. Turned out there were more rooms downstairs. Empty lofts served as additional party 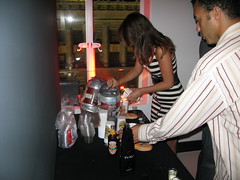 rooms, providing a couple of bathrooms, refrigerators with chilled bottles of Newcastle as well as a Yummy cupcake table. Since the Newcastle kegs up here were already tapped out, down was where we went.

The music was piped into these other rooms and yet it wasn’t as crowded down here. Maybe that’s why I preferred it. Even though there wasn’t any place to sit, there was the cupcake table. For some reason it was buried in a back room, near one of the bathrooms. Bf and I hovered near the table. All of the red velvets were gone but there were still ample vanilla bean ones.

That’s when Dawson from Yelp found me. “Are you Caroline?” she came up to me. We’ve only known each other through emails and Twitter. “Yeah, how’d you know? The cupcakes?” I asked, wiping chocolate crumbs from the corners of my mouth. “It’s cuz you’re taking pictures and holding an iPhone,” she said. Ah. Heh.

After some conversation, cupcakes and beer, bf and I were done for the night. BTW, the blackout cupcakes were awesome. So moist and rich without being cloyingly 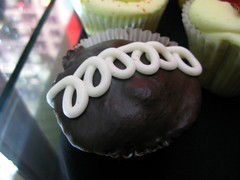 sweet. But I was greatly disappointed by the Old School cupcake which is meant to be a gourmet take on the Hostess cupcake. I couldn’t even finish it. Too sugary what with the frosting and the creamy center. Blech.

It was a good thing we were leaving as the Fire Marshall had swooped in and stopped more people from getting on the roof. Now, you could only get in when people left. Bummer. We ran into Jeff again when we were back on the street and told him the new development with the Fire Marshall. He simply shrugged and chalked it up to a very successful party. Hells yeah, it was.

Now I can cross my one weekend Hollywood party of the year off my list. Pfew!