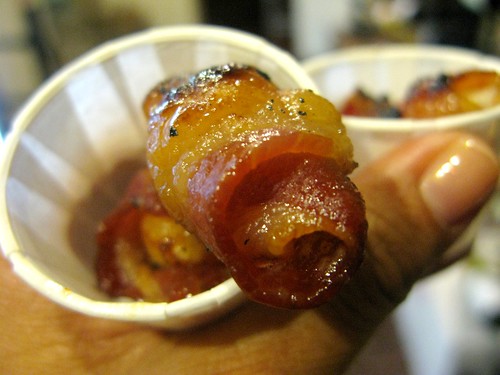 Man, I LOVE these white trash wine tastings that Colorado Wine Company in Eagle Rock puts on every year. It’s a chance for everyone to dust off their overalls, comb out their mullets and enjoy wine, not from a box, paired with 7-Eleven fare.

This year’s sold-out event was another one for the books. And for some reason, it seemed a bit more packed. Don’t know how that’s 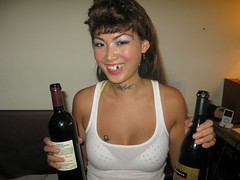 possible since CoWineCo owners Jennifer and John Nugent are strict with the head count. But maybe it’s because this time everyone came on time instead of in waves like last year.

There were also more people getting in the spirit of the theme, including the salesclerk with the best outfit of the evening: a long mullet wig, blacked-out tooth, fake tats and a wife beater. Damn, I should have dressed up, too!

white trash food highlight had to be the Frito Tarte of Fritos and chili, but this year it was the bacon-wrapped Lemonheads, with the tater tot casserole a close second. The heart-clogging dessert made me wince and salivate at the same time. It was kinda weird but then I settled into how the melty lemony candy and broiled bacon paired with the caramel and molasses flavors of the HM Borges Old Reserve 10 Year Malmsey Madeira. “I stayed up all night making those,” Jennifer said about the lemonheads. And it was well-worth it as people kept coming back for seconds, thirds and even fourths.

The wine highlight for me was Ken Brown Duncan’s Cuvee Pinot Noir 2006, which was paired with the sinfully, creamy tater tot casserole.

This pinot noir was so drinkable with a smooth finish, I couldn’t get enough of it and even snuck a second 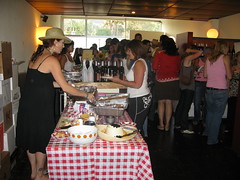 glass. I had to have it even if it was $26.99 a bottle — more than I usually spend on wine. Apparently it’s one of the picks for best wine in the store.

As for the other food pairings, I wanted to dislike the Wonder Bread and Cheez Whiz but it took me back to my childhood — Cheez Whiz on crackers and Wonder Bread with marshmallow fluff. I put away my worries about having to run 5 miles after eating a couple of those and just enjoyed the tang of the fake cheese with the undercooked dough. The Vinedo los Vientos White 2007 — a blend of Gewurztraminer, chardonnay and Moscato Bianco — made the trashy treat go down easier.

If you want to partake of this unique annual wine tasting, make sure to sign up for the Colorado Wine Company newsletter to get an advance heads-up because this hot ticket books up so fast! See you next year!

By the way, here’s the recipe for the tater tot casserole, courtesy of John and Jennifer, so you can whip it up at your own white trash party. “It’s alarmingly simple and as expected, not so good for you,” John says. 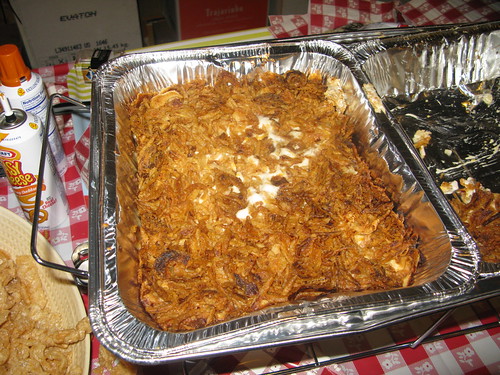 Pour this mixture over the tater tots. Sprinkle onions over the top of the casserole.