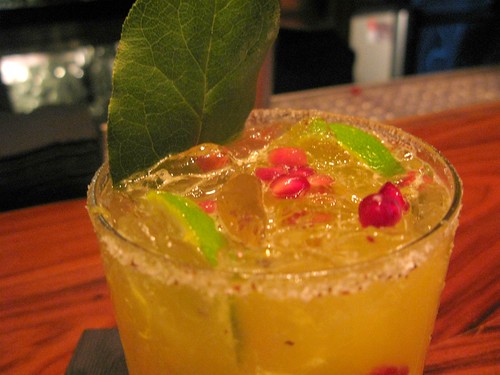 Does this Donaji cocktail at Rivera count as a “skinny cocktail”?

Lately I’ve been obsessed about losing weight and just recently decided to see what would happen if I went on a cocktail diet. After all, Americans drink about 20 percent of their calories on average (according to Fitness magazine). But instead of limiting my cocktail intake, why not just drink skinny cocktails? And I’m not talking about that Skinny girl fad but smart drinking like avoiding sugary ingredients, etc. Did you know a 2.5-ounce Manhattan has 130 calories? Now THAT’s a skinny cocktail I can get behind.**
**

So I did some research (aka poked around the Interwebs) and came up with some guidelines for smart, guilt-free drinking. ****Some of it may be obvious to most but I still found it useful to have it spelled out.

And I asked Damian Windsor of The Roger Room in West Hollywood what he’s told customers who’ve come in asking for skinny cocktails. Apart from Guinness and Bacardi and diet, he suggested a Partida margarita which basically has 1.5 ounces of tequila and agave nectar, no sweet and sour here.

For one customer averse to the nectar, he sweetened it another way. “While I worked at Copa, a guest told me he had an allergy to processed sugar (amongst other problems) so we went through a lot of products before we finally came up with 1.5 ounces of Partida blanco, two strawberries as sweetener and three ounces of grapefruit juice.” Sounds like a tasty way to cut down the sugar. FYI, you can also find this Partida margarita aka “The Perfect Margarita” at Rush Street in Culver City.

For fun, I perused through some of my fave Los Angeles bars’ cocktail menus and applied the above guidelines to figure out what sounds like the lesser of all evils. I’m not a health expert so can’t vouch for how many calories each cocktail actually has but again, these are just what I’d pick according to the low-calorie drinking guidelines. And remember, you can always tell your bartender to go easy on/leave out the simple syrup or agave nectar for a true skinny cocktail.

Fuego at the Maya: