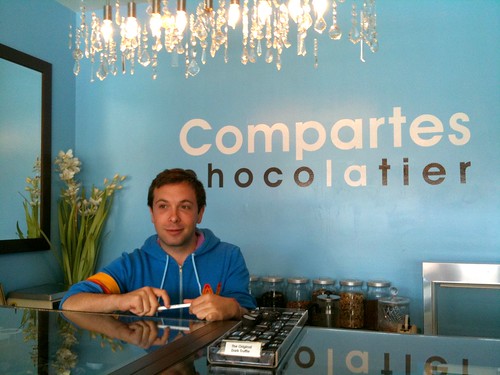 I was sitting at my desk minding my own business when Compartes Chocolatier Twittered about its new Guinness Stout beer truffle and sake truffle. “I’m on my way,” I tweeted back. I jumped on my Vespa and headed to Brentwood right quick.

When I got there, the store was empty save for a young man who was sitting in the corner in 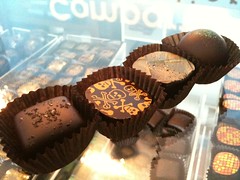 front of a laptop. He came over to greet me when I walked in. “I heard you have beer and sake truffles,” I said. He seemed pleasantly surprised that I showed up so soon after replying to his tweet.

Actually Jonathan Grahm, owner of Compartes Chocolatier, and I have run into each other at numerous food events, the American Wine and Food Festival among them. His beautiful chocolates (some hand-painted!) are something really special as Oprah, Speidi of The Hills and Food Network can all attest to. Speaking of which, Jonathan will be appearing tonight at 10pm on Food Network’s Chefs vs. City where he will be a guest judge in a tasting challenge! The store will also show up on an episode of The Hills on September 28. Kristin (“very nice in person” according to Jonathan) and Stephanie (“a bit of a snob”) enjoy gelato and chocolates on its outdoor patio. So L.A. but Jonathan seems to take that stuff with a grain of fleur de sel.

Anyway, back to that

Guinness Stout truffle ($2 each). Frickin yummy. Jonathan let me try a sample and at first I couldn’t taste the stout. Then I licked only the creamy center and the beery goodness became apparent. You could even feel remnants of the beer’s effervescence on your tongue! Magical. I don’t think you can actually get a buzz from it 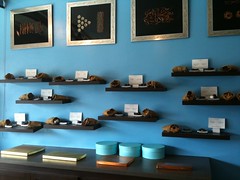 though. It was more chocolatey than anything since the chocolate shell was thicker than usual but that’s not a bad thing by any means.

I bought myself a sake truffle to enjoy later. You can totally taste the sake here and it’s so yummy if you’re a fan of sake. Be careful biting into it as it practically squirts out, though. The alcohol in the sake is more obvious than the beer truffle’s but not as overpowering as a rum cordial.

Both the beer and the sake truffle will be available in the store for the next six weeks. Apparently the alcohol truffles tend to last longer. Something about the alcohol preserving the chocolate.

Jonathan next offered up his favorite as well as best-selling chocolate, the peanut butter-honey-salt truffle. If you’re into “celeb” gossip you might be interested to know that Speidi bought an $80 box of it and sent it to Kristin Cavallari. She loved it so much that she bought more when she stopped by to film there. It IS pretty tasty though. So tasty in fact that Jonathan said that he was considering selling just the peanut butter-honey-salt in jars so people can use it to make sandwiches! “Do eeet!” I told him. Hopefully they’ll show up on the Compartes’ store shelves next year. 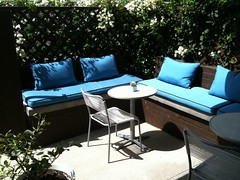 So a couple of other things I didn’t know about Compartes is that they also serve French press coffee ($7 for a large pot) and gelato ($3 for two scoops)! I had thought it odd that a chocolate store has an outdoor patio but Jonathan said that people like to enjoy their coffee and gelato and even their chocolates out there. I definitely have to come back and do that, especially when talking about their gelato which is created by a private chef. They always have exotic flavors like lemongrass (which paired nicely with the Nom Nom truck‘s Bahn Mi when the truck showed up yesterday afternoon) and vanilla fig and balsamic. The latter was soooo gorgeous with its chunks of fig in it. I could buy a whole carton of the heavenly stuff.

If you’re interested in trying to make your own chocolates at home, Jonathan has a video on Oprah.com demonstrating how to make chocolate raspberry cups.

And if you’re looking to do a good deed while appearing all fashionable and earth-conscious, 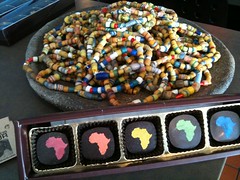 Compartes sells a box of chocolates that feature five African ingredients. It’s $20 a box but you also get a Relief beads bracelet ($9.95 on its own here…or $20 if you buy them from Fred Segal) with it. Fifty percent of the proceeds will go to benefit the only women’s center in Darfur.

I will definitely be back to check out what new and exciting flavors Jonathan has come up. He’s currently entertaining a kimchi-inspired truffle! No, not cabbage cream filling, rather a focus on the seasonings. This came up when he mentioned a meeting he’s having with the Kogi BBQ people tonight. Can’t wait to taste the result!