A sample of sound from West 4th/Jane.

You may not know it but there are a couple of newish gastropubs that are duking it out in Santa Monica. They themselves probably don’t know about this feud but after visiting both over the weekend, one is already my favorite over the other. In one corner we have West 4th/Jane, in the former 3rd on Fourth space, which opened several months ago and boasts 100-plus bottled beers, spontaneous Connect 4 tournaments as well as bacon crusted French toast and crawfish boil nights. In the other corner, there’s the week-old 5th Amendment Alehaus which is so new that it doesn’t even have the correct name on its sign (still says “Evergreen”) or a credit card machine yet but it does have 20 beers on tap as well as 30-plus bottled beers and weird Wurstkuche-like artisanal sausages.

I’ve been to West 4th several times but have decided that it’s more the place you’d go with a group of friends, as everyone else there appeared to be in groups. 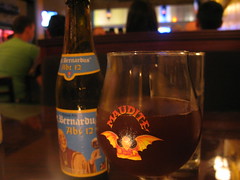 Loudly playing Connect 4, loudly cheering for their favorite team on one of the TVs and loudly having drunken conversations at the next table. The acoustics in this bar/restaurant amplify all such behavior. And if you seek respite from the crowd, sure, you can go upstairs to the second level where there are some nice couches to cozy up on and a nice view of the bar, but unfortunately you won’t escape the noise which just seems louder up there. So if you’re looking for a quiet night with your honey or a place to ruminate over your beer, this ain’t the place for it. Grab a bunch of your friends after work or come here after a heated game of hoops and whoop it up with everyone else.

beer selection is impressive so there’s something for everyone. The only issue is, and this is according to my bf who is big on Belgium brew, that although the bar makes a point to serve each beer in their appropriately shaped glass, not only do they serve the beer ice cold but they serve them in chilled glasses. Gasp! Apparently the condensation dilutes the beer and renders it flavorless. “Why only go three-fourths of the way?” bf asked. Indeed. He warmed his chilled glass with his hands before he poured his Duvel. 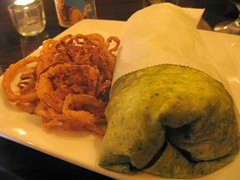 As for the food, since no one was willing to split the Fat Elvis (banana, peanut butter and fluff) with me I ordered the Waldorf Chicken Salad wrap with market greens, vegetables, chicken, apples, grapes and walnuts. It came with a side of crispy onions,