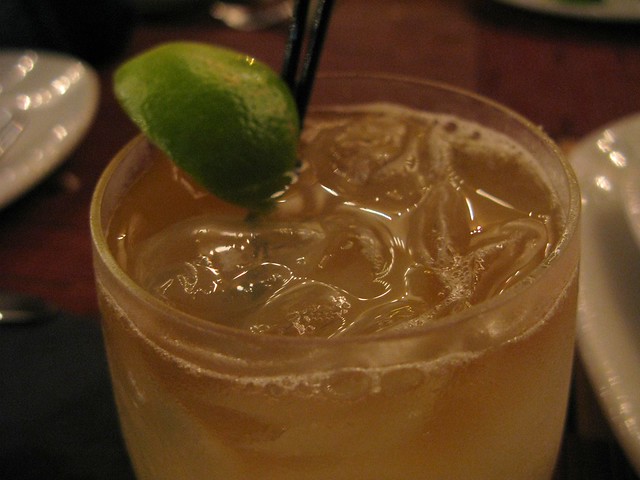 “You came all the way down here for my birthday?” my friend Sarah asked me after the cocktails just arrived at our table at Fuego in Long Beach’s Hotel Maya, formerly Coast Long Beach). “Of courrrse!” I replied. We’ve been through a lot together, dressing up like French maids in Buttonwillow’s 90-degree heat and sporting matching Elvis pompadours in Reno. Least I could do was drive all the way down to Long Beach from the Westside…through rush-hour traffic…in the middle of the week. 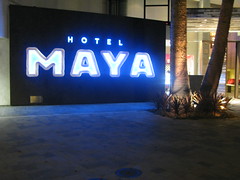 to blog about this place,” she smirked. Well, and that, too, I wanted to say. I mean, she’s 25% right. Of course I wanted to celebrate her birthday with her but on the other hand cocktails at LBC’s month-old hotel didn’t hurt either.

And here we were, four girls on a Wednesday night, enjoying the beautiful patio with a view of the city, which now resembles a rave with all its colored lights. The evening was balmy but for some reason this new bar/restaurant was fairly empty. “Well it is a Wednesday night,” one of the girls said. “But in L.A….” I started to say then stopped myself. Whatevs, I liked it like this. We had an attentive waiter and nothing to distract us from the task at hand: Getting the birthday girl blitzed.

Each of us carefully studied the

cocktail menu. Fresh produce and margaritas that make no mention of sweet & sour. Always good signs. And the prices weren’t too bad considering this is a hotel restaurant.

I didn’t tell the girls but I actually got the heads-up about this place weeks ago from its PR folk, who were good enough to put me in 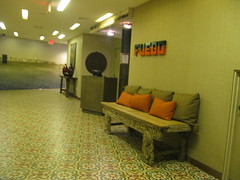 contact with Fuego’s GM and mixologist, Rich Troiani. When I heard that the restaurant’s general manager was the one who created the cocktail list, I was a little skeptical. But when I asked him what inspired the cocktails, he said that he wanted to focus on complementing the food. I love it when restaurants do that!

“First, I wanted to construct a great starting specialty list to match the concept, atmosphere and food from our terrific Chef Jesse Perez,” Rich said. “Having composed many different cocktail lists for different concepts; my favorites are the ones that play well with the interesting flavors that we associate with Mexico and Latin America.”

Very nice. Unfortunately we had already eaten dinner and were more interested in drinking and indulging in some desserts. Each girl ordered a different cocktail and then passed each one around so that we could sample them all. I was delighted with my Spiked Horchata ($12), which is housemade and described as consisting of the sweet rice milk, Seven Tiki Fijian rum and “a little love.” But when I had asked the waiter to clarify that last ingredient, he said, “Actually, let me check if we have any 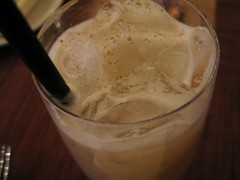 horchata tonight. We might be out.” Oh noes! After a lonnnng wait, he returned to our table with a tray of drinks in hand, my horchata cocktail among them. “We were out but we whipped up this batch especially for you,” he said. Oh this one is a smooth talker!

I was able to get the recipe for the horchata from Rich later but when I asked him about the “little love” ingredient, he said it was just to make people smile. I told him that it made me suspicious. I mean, if you’re going to tell me a drink is spiked and include a vague ingredient, I’m going to think you mean you ruffied it up. Fortunately, that wasn’t the case here.

But here’s the recipe for the housemade horchata if you want to make it at home. Rich said that it needs to be thick in order for the consistency to work in the cocktail.

In a pot: add water, rice, cinnamon sticks, and zest. Set aside and let it sit for 3 hours. After 3 hours bring to a boil. Then lower heat and let simmer for 30 min. Then remove cinnamon sticks, add sugar and milk. Let cool, then pour mixture in a blender and blend. Either run through a cheese cloth or bottle it. If too thick, add water to consistency you desire.

Anyway, yes, the Spiked Horchata was my fave cocktail as well as that of most of the 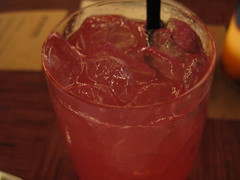 girls. I liked its creaminess and subtle sweetness. Plus I’ve been dying to have a horchata cocktail forever! Blame Ortega 120 in Redondo Beach.

The birthday girl liked the Pomegranate Allegre ($11), which surprised me because I thought she only liked sweet cocktails (Colorado Bulldog among her faves). This pomegranate martini made with Finlandia vodka, pomegranate, lemon and Cointreau was wayyy too tart for me. “It tastes like it’s all vodka,” she purred. Eh, I didn’t really care for it. We also tried the cucumber martini ($12) which tasted as you’d expect — spiked spa water. And sipped on the Hibiscus Lemonade Rickey ($10) made with Bombay gin, hibiscus tea, lemon and soda on the rocks. This one was really light. Great if you don’t like the taste of alcohol. Again, I was really glad I got the Horchata cocktail as none of the other ones did it for me as much as that one.

We had wanted to try the Brazilian Pina ($11), a cocktail of vanilla bean and pineapple-infused rums, but the waiter said that the rums were still in the process of getting infused. This wasn’t the only time we were denied a request. They couldn’t make us any espresso drinks either since they didn’t have an espresso machine yet.  Ah well, I made do with some jasmine tea ($3 for a pot) — I was the designated driver. 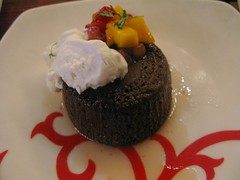 For dessert, I split the Mexican chocolate-almond ice box cake ($8) with Sarah. It was kinda small and I wished I had ordered my own because as much as I loved this rich, creamy, chocolatey dessert, I wasn’t about to play fork hockey with the birthday girl. The other girls, Sara and Gretchen, split an order of banana crepes that weren’t on the menu. These were soooo tasty! The cream in the crepes tasted like it not only had a hint of bananas but rum, too! Mmm, so good.

While I sipped on my tea, the girls ordered another round of drinks. This time bday Sarah ordered a horchata of her own, while the other Sara got the El Presidente’s Cadillac margarita. Actually this wasn’t on the menu but came as a recommendation from our waiter. It’s basically a Cadillac margarita with Grand Marnier and a “float of El Presidente brandy.” That was some stronnng drink but really yummy.

And when the waiter found out it was Sarah’s birthday he brought her out a glass of the 2008 Botani Sierras de Malaga Moscatel Seco from Spain. Apparently they only 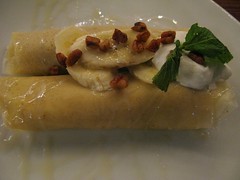 sell this by the bottle here and it’s $46! (But, shhhh, you can get it at K&L for $19.99.) Even though Sarah hates wine, she was surprised by how much she liked this, and even finished it.

So suffice it to say that we had a grand ol’ time at Fuego. It may not be the place to see and be seen in Long Beach right now but it’s a great venue for a romantic after dinner drink, group dinners or drinks and desserts with friends, before everyone else finds out about it.

We definitely want to come back to check out the Sunday brunch, Fiesta Domingo Brunch, from 10am to 4pm. It would be so perfect to sit out on that patio on a beautiful, sunny day and enjoy some mariscos, grilled food and brunch cocktails along with the music and dancing. BTW, the September 13 Sunday brunch will benefit spcaLA, with 10 percent of the day’s sales going to the organization. Aww. If you want to go, better make your reservations quick.