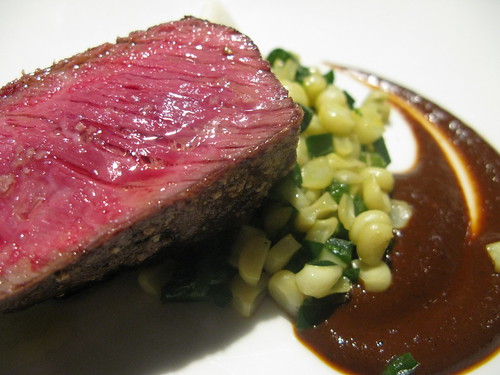 Honestly, even though there’s a perfectly good chef and a perfectly good kitchen, I never really considered BottleRock Downtown a dining destination before. Wine, beer and beer floats, yes. Actual food food? Not so much. That is until its resident beer geek Alex Macy invited me to check out a food tasting the wine bar is 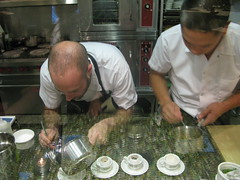 looking to do regularly on Monday nights; popularity willing. Apparently this is something that they just started doing for the public, as well as for private parties but it’s on Mondays when you get both Executive Chef Jared Levy and Sous Chef Viet Pham in the kitchen. And that’s when things get really creative.

Last night, Johnny the Fish of Social Domain was my companion on this three-hour culinary journey where I went through a gamut of emotions from fear, elation, shock to pure contentment. I experienced the circle of life, from the egg vessel of the Champagne Sabayon to the violent death of a prawn. Of course, it helped that we sat at the bar stools located right in front of the window looking into the kitchen. Not great for the servers to get to but awesome for the diners in that you feel like you’re at the chef’s table. Plus it’s a great vantage point for blowing kisses at the chef should the mood strike you. And believe me, it will.

BTW, this was a hosted tasting, normally

this particular tasting menu is $50. For the tastings, they’re looking to keep the prices under $50 and the courses from four to six plates. 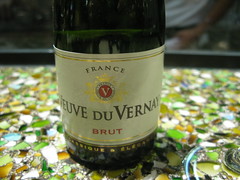 So, Alex started us off by presenting an ambitious-looking six-course menu, not including the amuse bouche and the dessert. Fortunately, each plate was just tasting portion size but still, if you want to do this you need to make sure you don’t have to be anywhere in a hurry after.

And obviously you have the option of pairing either wine (additional $20) or beer (additional $10). We were lucky enough to do a mix of both. Personally I prefer the beer since you don’t see that too often, plus they have an awesome selection here. But whatever the case, I’d go with Alex’s suggestions of what he thinks would best complement the food.

Below are the courses with my notes:

Amuse: Grilled cheese and tomato soup (paired with Veuve du Vernay) — The gougeres were so light, love the crispness of the fiscalini cheddar. The tomato soup was awesome with the hint of roasted red pepper. Love that it was creamy (not milky mind you) and not too tomatoe-y. 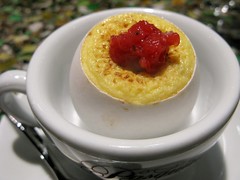 1st course: Champagne Sabayon with eel and pickled plums (paired with Veuve du Vernay) — The Veuve worked well with this light custard-like tasting.  The custard part was a bit salty but gave way to the savoriness of the eel which was divine. I liked how Alex made sure to tell us that we can’t eat the egg shell or the salt that’s holding up the egg. “Really? You have to tell people that?” I asked. But I guess it’s a legal thing.

2nd course: Live Santa Barbara Spot Prawn Sashimi with Kabocha squash, ginger and Saba (paired with Domaine Guy Allion Sauvignon) — Alex calls this white wine “liquid crack” as it’s the most popular selling one here and once one person at a table orders it, everyone else has to, too. Now this “live prawn” dish traumatized me somewhat. Jared knocked on the window to get my attention and when I looked up he held aloft a squirming prawn, then twisted its head off. AAAAAAAAHHHH!! He went on to do that with a bunch of other still-live prawns. I had to turn away. When I finally looked up again, he had laid the meat of the prawn on a dish and 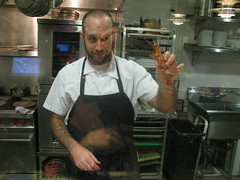 garnished it with the squash cubes and some sauce. I was sooo reluctant to eat this but at the same time that’s the freshest seafood I’ve ever had. Jared and Alex noted that sometimes with just killed prawn, you can feel the meat tense up while you bite into it, like a pulse. Creepy! Yeah, I don’t know if I want to eat that again but I do appreciate its freshness and it was tasty once I got over the whole “I just saw you alive” thing.

3rd course: Shima Aji with curry rice, scallion, lemongrass and basil pistou (paired with Victory Prima Pils) — This was salty but not in a bad way. In fact it paired perfectly with the traditional Czech-style pilsner. At this point in the meal, I was full but we still had a ways to go.

4th course: Deep-fried Santa Barbara spot prawn head (paired with Victory Prima Pils) — Aaah! The prawns are back and this time it’s just their heads. I knew this was coming because Johnny kept pointing out the fact that they were doing stuff with the prawn heads in the kitchen and how excited he was. Delicacy schmelicacy, I say! But Jared and Alex wouldn’t let me continue on to the next course without finishing my prawn head first. “If it helps, someone once told me that the fried antennae reminded them of French fries,” Alex said. “Yeah, actually 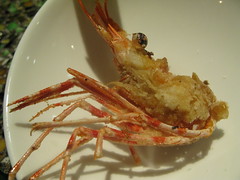 that helps…a little,” I replied. “But it still has eyeballs!” I then cried. “Eat it!” Johnny commanded. So first I crunched on the antennae and when I found that wasn’t too bad I proceeded to nibble on the head, but first made sure to pluck off the crunchy eyes. I ain’t eating those. In the end, it wasn’t as gross as I thought. It just tasted like a fried fishy something.

5th course: Pan-roasted chicken with cherry beer glazed pappardelle and cherry tomatoes (paired with Duchesse de Bourgogne Flemish Red Ale) — The Duchesse is paired with this dish because it’s also used in it. Alex called this red ale the gateway beer for sour beers. I’m not a fan of sour beers but this was pretty tasty. As for the dish, I loved the tenderness of the chicken and the butteriness and flavors of the pasta.

6th course: Top sirloin with corn, pablano chile and mole negro Oaxaqueno (paired with Alesmith Nautical Nut Brown Ale): First off, I LOVE this nut brown ale. So toasty and went well with the juicy steak. Now, I haven’t had beef in months but I guess if I’m going to do it this is the way to go. High-quality tasty sirloin. Mmm! It was definitely a hearty way to end 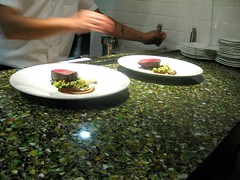 Dessert: Three cheeses (paired with Alesmith Grand Cru) — OK, I’m not too clear which cheeses these were as I had to spell them out phonetically in my notes (“queso de bel dion”?) but there were sheep’s milk and goat’s milk cheeses and a really pungently awesome blue cheese. But since at this point I was stuffed and we had a beer float to look forward to, I didn’t really finish this up. I did love the full-flavored Grand Cru enough to buy myself a bottle ($12-ish), though.

Yes, even after all that we still had room in our bellies for a couple of beer float tastings. This wasn’t part of the tasting menu and we were ready to pay for one ourselves but instead Alex offered to bring us out tasting portions of the popular Allagash Curieux with vanilla ice cream and the Old Rasputin with lemon verbena ice cream. The first because it’s just plain tasty (yum!) and the second just because it’s an, um, unusual pairing.

Truth be told, this flavor combo — the sharpness of the lemon and the chocolatey-ness of the Rasputin — ended up tasting like, ahem, pot brownies. Now, if you love that taste, then 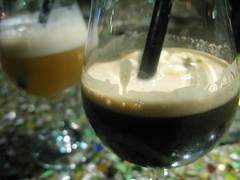 this is the beer float for you. Thing is, Alex said that this particular batch of lemon verbena ice cream tasted different from how it usually does so no telling if this funny flavor will be duplicated. But my eyes are now open to the Allagash Curieux with vanilla. I had thought it would be too plain but it’s actually so creamy and flavorful and a welcome alternative to the sharpness of the “illegal” beer float.

So a really fun and adventurous tasting menu. “I wasn’t expecting that,” Johnny said as he dabbed the corners of his mouth with his napkin. “Definitely a commitment,” he added. I looked at the time. Oy! Three hours later, it definitely was. And who would have suspected a downtown wine bar would contain such food adventurousness?

Now as for future tastings, you may not find them on the restaurant’s Twitter feed or even on its site but Alex did say that he was thinking of making a dedicated Facebook page for the restaurant with updates, so keep an eye out. In the meantime, you’ll just have to take your chances and head to BottleRock on a Monday night to see what Jared has up his sleeve. You won’t be disappointed.