When I was growing up, dolls used to creep me out. Blame all those horror movies I used to watch about them coming to life and biting people with their razor teeth. Except Chucky, though, that movie franchise was just dumb. But when I first saw those cool dolls at Royal/T Cafe in Culver City, the dolls that the Lolita population is all about, I started to consider getting one for myself. They’re so pretty and weird and cool! Ooh! A Breakfast at Tiffany’s one!

However, after I attended the Candy Land Lolita party at the tea shop/art gallery earlier this month 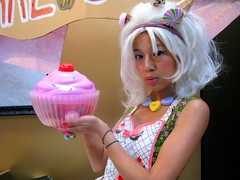 and mingled with a bunch of grown women dressed like dolls, I realized this is not the hobby for me. Kinda reminded me of Trekkies, not that there’s anything wrong with that. I’m a huge Star Trek fan but I draw the line at donning a Deanna Troi catsuit and going to conventions. That’s the same way I’d approach Lolita-ism. Buy the doll and maybe hit the occasional tea party but not necessarily dress up to match her.

Now for those who don’t know, Lolita fashion comes from Japan and is inspired by Victorian clothing. But where you’d see people actually dressed in those fashions walking around in Tokyo, you wouldn’t see them out and about shopping at the Grove and whatnot here. So this party was a chance for the girls to show off.

And boy did they ever, going all out at this saccharine-sweet party — donning everything from petticoats to ribbons to ruffles to curly doll wigs. Some made their costumes out of brown paper bags and plastic garbage bags while others looked like they rented an elaborate costume for the day. 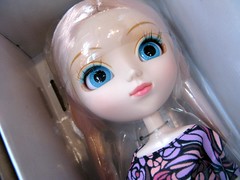 while some girls complained that they’d like to be asked first before having their pictures snapped, most loved the attention. In any case, with a cotton candy machine, cupcake table, a meet and greet doll table, life-size Candy Land board game and even a corner selling Lolita accessories (I bought a pearl necklace with a pink bow for $10), there were lots of activities for the doll girls and lots to take pictures of. And those who came without a doll were free to shop the Valley of the Dolls pop-up store.

After we realized cotton candy just wasn’t going to do it for lunch, we decided to indulge in the special Candy Land high tea ($19.50). But this turned out to be a big mistake as, although cute in its 3-tier setup, only the bottom tier contained “real food” like canapes with shrimp and tuna and a beef-wrapped asparagus spear. The top two tiers were piled with uber sweets like a brownie, banana bread, a bunch of hard candies, a cupcake and gummy worms. Erp! 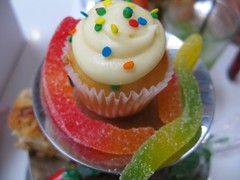 churning out and giving away for free by the entrance, I ate what I could (of course I’m not tossing that cupcake!) and gave the rest to LAist’s Julie Wolfson to give to her daughters who were in the Lolita fashion show later that evening. The only highlight of our high tea was the tea itself and even that was just OK. I had ordered an iced Rooibos tea with a shot of vanilla syrup. Unfortunately this didn’t taste as good as I remembered. I asked the waitress if she had included the vanilla syrup. She said she did, but then again maybe at this point my tongue was numb from all the sweets.

I don’t think I’d do the high tea here again as the food was meh but I would definitely enjoy tea and a pastry as an excuse to people watch at these events, which are always fun. And who knows, maybe one day I’ll spring for a doll to join me. Hmm, which one should I get? This one or this one?

More pics from the Lolita party.