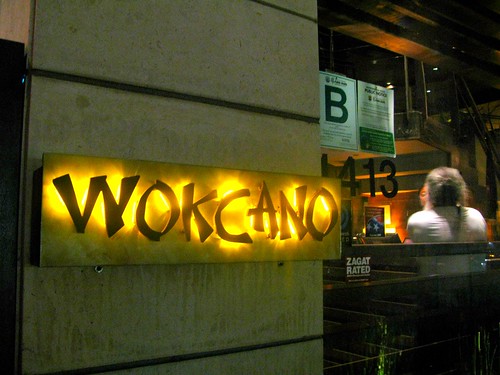 It was just last year when I attended the grand opening party of the Wokcano in Santa Monica. After being turned off by its sugary cocktails and high-priced sushi, I secretly vowed to never show my face there again. Eh, not really my thing but if it’s your thing then that’s OK. I just didn’t see a reason to make a big deal of my meh opinion of it.

But then Wokcano‘s PR person enticed me to pay the restaurant another visit with her pitch of the “Get Bombed” menu, which, even though I’m not a big bomb/shots fan I was still curious about their special $3 sake, Jager and Irish Car bombs. The special was only during certain hours of the week. I won’t list them here since we’re still not exactly sure when they are.

In any case, since the PR person also mentioned the restaurant’s new summer roll, a BBQ kobe tempura roll, I naturally thought to invite food bloggers Sarah of The Delicious Life (who came despite her unfortunate encounter with the Doritos roll in a previous visit) and H.C. of LA and OC Foodventures; and Connie of music blog Hey, Hey Scenesters tagged along for good measure.

Now as food bloggers we get invited to the occasional media event and hosted dinner to check out the restaurant’s offerings. And it’s usually unspoken that these things are comped. So naturally as said food bloggers we assumed that that would be the case here. Because bbq rolls and sake bombs are things we wouldn’t order on our own.

In any case, for reasons I won’t get into, we didn’t get to try those items. Apparently every Wokcano (there are six locations in L.A.) has different items and different specials, yada yada. But instead of leaving with empty stomachs, we decided to stay and just try the dishes we wanted to try since we’d be paying for it out of our own pockets. I ordered the Late Night Party Roll ($14.95), which is crabmeat, avocado roll topped with baked lobster, scallop and smelt egg in a creamy sauce. Since I couldn’t have a bomb, the waiter kept trying to get me to try out another cocktail. But after my stellar Golden Jubilee cocktail I had down the street at Copa d’Oro beforehand I just wasn’t in the mood to make the best of it with one of theirs.

Of those items, guess which we thought was the best?

Surprisingly it was the spicy garlic chicken. “When is chicken ever the best dish at a restaurant?” Connie asked H.C. So true. But it was. The chicken was tender and the sauce was savory. Great with an order of brown rice ($1.50). Add to that it was the cheapest of what we ordered. As for the other dishes, H.C. called the Late Night Party Roll a dumpster-diving roll because it was constructed in such a way that you had to search for the sushi pieces under what basically is scallops dynamite. What’s the point of putting rolls there if they’re just going to get torn apart in the search? It was tasty but not compelling enough to order again at $14.95. The Black Pearl Roll tasted different from my initial run-in with it ****at the grand opening party. Here, it was so salty and just left much to be desired. The sauce of H.C.’s orange shrimp dish reminded me of a higher end version of Panda Express’ orange chicken. And that was $16?

As for the service, even though our waiter was very cute (“He’s so pretty!” Sarah gushed), charming and friendly, he didn’t check on us too often even though there were only two other tables on that outdoor patio. Eff it, in the whole restaurant. So basically we stayed there longer than we really needed to or wanted to.

Yes, at first I was reluctant to categorize Wokcano as a PINSMFA but after this experience I have to just say it out loud. For sure, never going there again. Again, just not my thing. And there are just so many other places I’d rather go to in that area — Riva, The Fig, Buddha’s Belly, Border Grill, Fritto Misto….

Afterward, to save the night, H.C. and Connie went over to Copa d’Oro to partake of its all-night happy hour (only on Mondays), Sarah went home to snack on ranch-flavored Doritos and I went home to fix myself a tasty Manhattan and watch Iron Chef, secret ingredient: oxtail.