Unlike a lot of my food blogging brethren I don’t cook, and judging by the reaction I got from Food Network judges Susie Fogelson and Mory Thomas, it’s a good thing I don’t because apparently I suck big time at making even just bacon and eggs. When I made it for them they hated it, said it was too salty and even grabbed at their throats as if they were choking. H’well! 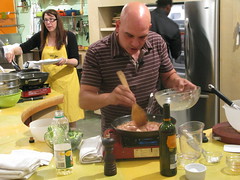 Naturally I was humiliated until I remembered that I was just playing Food Network’s new Wii video game by Namco Bandai, Cook or Be Cooked (to be released November 3, 2009).

I was invited to an event at Hipcooks West introducing the new game to a bunch o’ bloggers, i.e. my friends from estarLA, Food GPS, Food Marathon, LAist, Pleasure Palate and When Tara Met Blog. We were easily enticed by the promise of Wii game playing, gourmet appetizers and booze as well as a cooking demo by Iron Chef Michael Symon of Iron Chef America.

The party had a cool setup in that at the same time we were watching Michael prepare and cook a chicken stir fry recipe in the kitchen behind us, we got to watch Namco Bandai’s Mike Morishita create and cook the dish on the game. So we heard and smelled the real thing while watching it come about on TV. Neat! I wish I had a kitchen like that in real life. “Computer, Chicken Stir Fry.” “Blee bloo bleek: Chicken Stir Fry.” 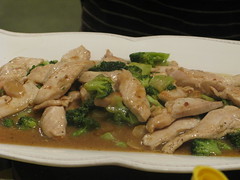 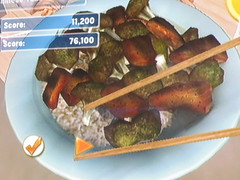 The only thing is that after Michael finished his dish, they didn’t pass it around to the guests to try out. It just sat on the table where he plated it. Kind of a tease. I practically had to beg for it. “Pleeeassee, can I taste it?” I guess they just didn’t want us to get too attached to the idea of expecting to eat the real thing after creating it in the game.

And that’s the thing, at first I didn’t understand the point of this cooking game, along with others of its ilk like Cooking Mama. You go through all the trouble of cooking without that payoff of actually eating your creation after? But as I actually played the 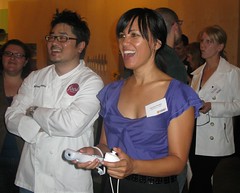 game using the Wii Remote and Nunchuck, I appreciated being able to spill the entire contents from the salt shaker on the eggs and burn the bacon without having to throw out the food or scrape the charred pan. I also liked that in this kitchen I wasn’t in danger of burning my hand or cutting myself for a change.

Mike Morishita explained that that’s why this is a great way for a newbie chef to practice and get a feel for the kitchen and recipe. They could mess up without suffering any real consequences, unless you really take offending the judges to heart, that is. At least you get to practice the timing of each part of the recipe and decide which you want to start first (hint: start the one that takes the longest) and learn to juggle them. What’s cool is that you can even speed up time by pressing the C button if you don’t want to actually wait for the eggs to cook.

So maybe try a couple of practice runs on the ol’ Wii and then do the real thing after you feel confident. When you improve in the game, the judges are actually overly 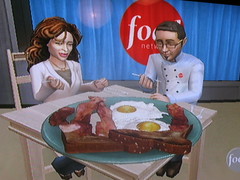 supportive, praising you for stuff like flipping over the bacon in time. “Perfect timing!” Heh. And you get bonus points for multi-tasking.

You have your choice of 30-plus recipes taken from Food Network’s cookbook, How To Boil Water, and playing in cooperative or competitive mode and at different cooking levels. And, yes, the bacon and eggs was the beginner level. Maybe one day I can get to the lasagna level.

Unfortunately, they don’t have stuff like tiramisu or chocolate layer cake, yet. But Mike hinted that they are considering making a dessert/baking version to try out your oven skills. Now that’s a game I can score high in!