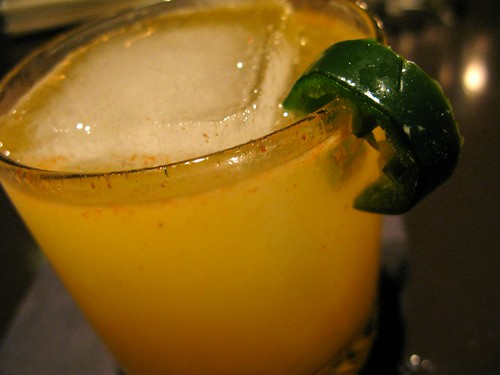 Esther of estarLA, Neil of Food Marathon and I started to make a secret pact. There’s a bar that we went to the other night that has an awesome, yet-to-be-discovered bartender who creates cocktails with the likes of prosciutto-infused bourbon, olive oil and fresh ingredients straight from the farmer’s market which he goes to five times a week. The problem is that he works in a bar that has such a small space that if word got out about him and his innovative drinks, we’d never be able to visit him ever again. 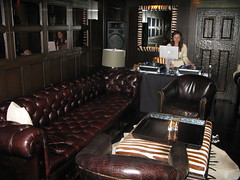 But then we realized that since this small, speakeasy-esque bar is in the heart of Hollywood, land of permit parking and metered parking til last call, and the cocktails run about $15 each, we’re probably not in too much danger of creating a stampede of cocktail enthusiasts running over to the Library Bar at Hollywood Roosevelt Hotel.

But I have to tell you, Matt Biancaniello is pretty darn good. He’s only worked at the Library Bar for a year (yes, he was/is an actor) and started his mixology program about eight months ago but what he lacks in years of experience he more than makes up for in passion and MacGuyver-like ingenuity. He counts Copa d’Oro as his favorite bar (Vincenzo gave him some pointers on how to make foam) and his favorite spirit is gin, fave drink gin and tonic.

Esther, Neil and I were lucky enough to be hosted over at the hotel bar. I was so glad it wasn’t Teddy’s or the Tropicana Bar but then again those clubby parts of the hotel are strictly of the quick pours and Red-Bull-and-vodka variety. It’s only at LB where they use Neve ice and take the time to create cocktails you’d consider. 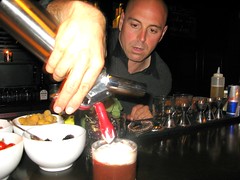 Actually I had to look on Yelp for the bar’s location since the hotel’s site makes no mention of it. Turns out it’s just off the main lobby in a small dark room filled with leather furniture and weird faux zebra skin bar stools.

The three of us cozied up to the bar and made friends with Matt who, despite the impatient hotel guests and thirsty West Hollywood Film Fest goers, was able to fix us up countless creations. OK, I think there were about nine (?) drinks we sampled. And I was motivated enough to finish two.

Here’s the rundown of what we had in order of my most fave to not-so-much:

I’d like to visit Matt again, on an off night when there is a bar stool open. He definitely has fun with mixing cocktails, likes to explain as he goes along, and is great with thinking outside of the box. “Someone is going to steal him away,” Neil said as we were leaving, making our way down to Essex. If they did, I’d follow him.