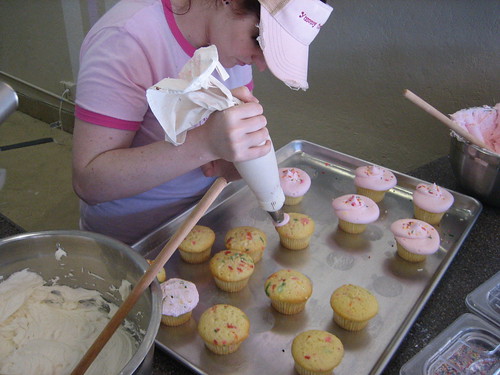 I may not have been crazy about Yummy Cupcakes in the past but I definitely have to give them credit for their creativity and daring with regards to flavors. Pancakes n’ Bacon? Tomato Soup Cake? Chocolate Merlot?

Yup, remember when they had wine flavored cupcakes? Well, cocktail enthusiasts might be happy to know that they can now enjoy some popular cocktails in cupcake form. But not only is there alcohol baked-in goodness, but you can get them for $2.50 between 5 and 6pm on Fridays during the store’s “happy hour.” (The cocktail cupcakes are normally $3 each.) I’m both skeptical of and intrigued by the cocktail choices. But what do you think of them?

Heyyy, where’s the Irish Car Bomb? Now THAT would be something. Interestingly enough, a check of **August’s full menu **also lists other cocktail flavors like Blue Hawaiian, Fuzzy Navel, Hurricane, Mai Tai, Mojito, Mudslide and Strawberry Daiquiri but none of these are listed on the calendar. Perhaps they’re just available for special orders like that yummy-sounding Elvis cupcake.

At the Burbank and Santa Monica stores.