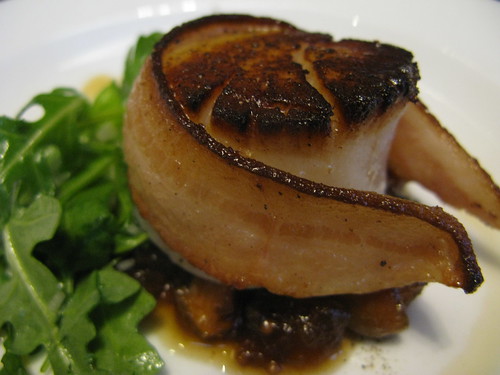 Wine dinners are sooo 2008. I say, now it’s all about beer dinners where not only are the courses paired with beer but they have beer in their ingredients, too! Wine dinners don’t even carry it that far. Notes this, nuance that. Blah. OK, maybe wine dinners won’t ever go out of style but judging from the extreme yumminess of the Unibroue beer dinner at Akasha last night, I’d say brewski dining is the way to go. And they don’t feel as snobby.

Yup, this is only the second such dinner that the Culver City organic restaurant has ever hosted and it makes me wonder why don’t more venues do the same thing? It was brilliant. On this night, Unibroue was the featured brewery (last beer dinner two weeks ago it was 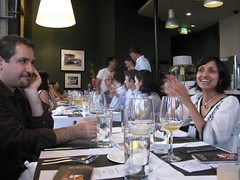 New Belgium) and I’ve enjoyed its Chambly Noire and Trois Pistoles plenty but never to the point where food is used to bring out its flavor. I never knew those beers could taste even better.

Chef Akasha Richmond worked with Unibroue to design a five-course menu around five of its beers and I was invited to partake of this dinner alongside bloggers Food GPS and estarLA (it was hosted for us, all others paid $55). Unibroue rep, Mike Smith, was our guide through the courses, edumacating us on each beer’s history and flavor notes.

The night’s menu along with my notes after the jump…

Grilled pizza bread made with microbrew-enhanced aged goat cheese paired with Blanche de Chambly White Ale: This refreshing and very hoppy beer is actually on tap at Akasha. It paired nicely with the pizza in that both were light making them perfect for starters. 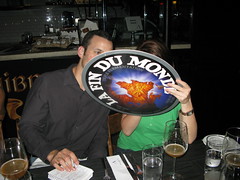 that this apple ale “smells much more primeval” than the white ale. Interestingly the scallop and bacon brought out the apple flavor in the ale more which is made with fresh-pressed apple must.

Duck confit, grilled nectarines and Lolla Rossa with spiced local walnuts and walnut citrus vinaigrette paired with La Fin du Monde Tripel: This beer is very champagne-like and worked nicely with the duck confit and the nectarines, which were my favorite aspect of this dish along with those spiced walnuts. At this point in the meal, I was stuffed. Erp.

Beer braised pepper crusted short ribs with poutine-style housemade fries with aged cheddar and McGrath Farms caramelized carrots paired with Chambly Noire Black Ale: Everyone at the table was looking forward to this dish. The meat was so tender that it just fell away from the bone, I didn’t even need a knife to cut it. I wasn’t crazy about the poutine-style fries though and asked Food GPS and estarLA if real poutine tasted like that, meaning meh, and they said no since actual poutine has more gravy and cheese. In any case I loved the delectable meat. And this black ale is actually one of my 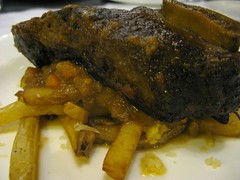 faves so I couldn’t really go wrong with this pairing. One of my fellow diners: “I’m so happy.”

Dark chocolate chip ice cream sundae with hot fudge sauce, Pudwill raspberries and goji berry chocolate biscotti paired with Trois Pistoles Strong Dark Ale: Unfortunately I had to rush through this dish since the dinner was taking longer than planned. I was so sad about that. Didn’t really get the chance to savor and enjoy it but damn was it dee-lish! The creaminess of the ice cream, the crunch of the biscottis, the richness of that chocolate. And it worked really well with the strong dark ale. Mm, I wonder how this beer would do in a beer float.

By the way, since I’ve been trying to cut out dairy and meat from my diet, I could have been a good girl and requested the vegetarian version of this menu but after I saw “bacon-wrapped scallop” that diet was a goner, at least for this night. And I didn’t regret my choice one bit, not when I was savoring that bacon-wrapped scallop, not when I was salivating over the duck confit and not when I was tearing the pieces of the oh-so tender short ribs. Mmmm! But the best part was the dark chocolate chip sundae. Dear Lawd!

If you can’t tell by now, I loved this dinner andI highly recommend checking out the next one. Apparently it’s scheduled for Tuesday, August 18 but no word yet on which brewery will be featured. Just subscribe to Akasha’s newsletter to get the deets as soon as they have them. BTW there was talk of a vodka dinner, too! It’ll be in September and feature Tru Organic Vodka. Interesting.