Angeleno Magazine's 7th Annual Chef's Night Out at the Fairmont 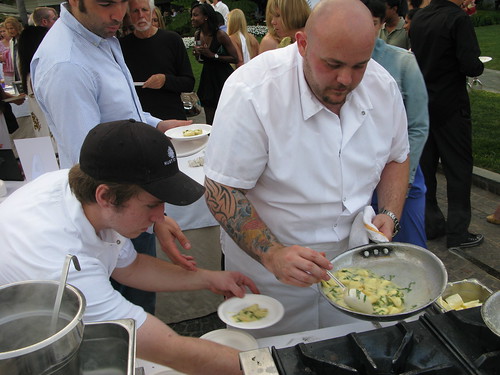 I was soo naughty yesterday. I broke my dairy fast to indulge at Angeleno Magazine’s 7th Annual Restaurant Awards and Chef’s Night Out. But how could I say no to all the goodies prepared by some of L.A.’s renowned chefs, most award winners featured in the magazine’s new Restaurant issue?

The Fairmont Santa Monica’s front park under the beautiful, 130-year-old fig tree was the setting for this annual foodie fantasy event. My bf and I arrived in time for the VIP reception which gained us early 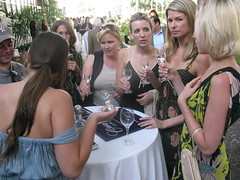 entrance and shorter lines to all the wine and spirits. True, they were only giving tasting portions at the tables but Casa Noble cocktails were also being passed to the crowd. After a sip of the award-winning Wild Turkey Russell’s Rye (Double Gold for Best Rye) and Parker’s Heritage Collection Kentucky Straight Bourbon (Double Gold for Best Brown Spirit) as well as the tasty Casa Noble Teqtonic cocktail (tequila and tonic water) I got a good buzz going on. So I said no to the tequila tasting but I found myself saying yes to things I otherwise would have had the discipline to turn down.

It all started to unravel when I saw

Rustic Canyon‘s Executive Chef Evan Funke’s goat cheese tortelloni with fresh mint — a dish that doesn’t appear to be on their regular dinner menu. First, I LOVE goat cheese and second this had the longest line of any of the tables so I knew it must be special. Sure enough, it tasted as good as you’d expect: creamy, oh so creamy with a nice refreshing hit of mint. After the last bite I instantly chastised myself for not grabbing more of those teeny plates. Not surprisingly, these were the first to run out. I guess other people had the same idea I did.

**My other favorite bites included Susan Feniger’s Paani Puri (crispy puffs stuffed with spiced potato, chutneys and sprouted beans, $6 on Street‘s menu) and the Westside Tavern‘s lamb French Dip (but this was already my favorite sandwich anyway; $16 on dinner menu). And I was surprised that I actually liked the Fig‘s Torta de Lengua considering it’s tongue. Apparently the thought of consuming tongue frightened other people at the event as the dishes didn’t fly as readily off the table as the other dishes. Something I didn’t understand since it was such a small portion, the timid diners didn’t have much to lose taking a chance. And you’d think the event’s patrons would be into trying something new. Ah well, their loss. It ended up having the same texture as pulled pork. I don’t know if I’d order a huge portion but the sample portion was just fine.

I stopped by the W’s Nine Thirty table where they were showcasing a delectable roasted duck breast with summer peaches, red onion relish and honey-tabasco glaze prepared by Executive Chef Monique King. That was pretty tasty but I was more intrigued by their talk of twilight bonfires at 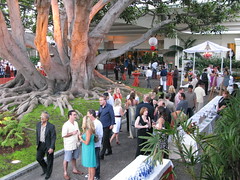 Nine Thirty on Saturday nights from 7:30-10pm. It’s poolside and there’s a special tapas menu as well as white and red sangria. They also boast a hangover brunch on Sundays from 11am-3pm with an all-in-one breakfast pizza or soak-it-up biscuits and gravy. You can pair any dish with a pint of lager or choose from a variety of Bloody Mary mixes. Nifty.

But the highlight of the evening, besides the passed platters of Fig’s homemade fig Newtons(!), was of course the awarding of awards. Here are just some of the big winners:

Check out Angeleno Magazine’s new Restaurant Issue for the rest of the winners as well as a piece about the top five burgers in L.A. (note: Father’s Office ain’t one of them).

More pics of Chef’s Night Out.