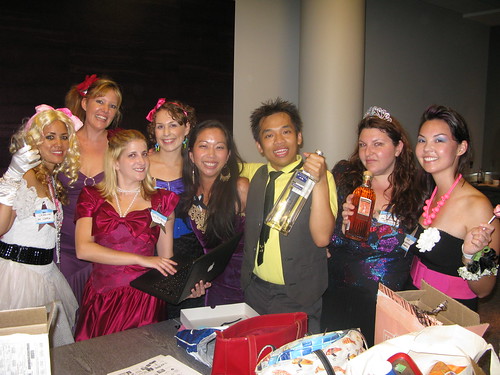 It started out on a whim, Blogger Prom 2009, that is. A bunch of us bloggers were walking from a Macallan Scotch Tasting at the Viceroy to dinner at the just opened La Grande Orange in Santa Monica when it came up. As food bloggers we found ourselves running into each other a lot at the same events, the same venues, the same blogger dinners and figured why not have a huge event for just bloggers.

We’ve always wanted to do this sort of event, to get to know the faces behind the blogs. As it is we only recognize each other’s blog names or Twitter names. I had thrown a blogger night at the Edison’s Radio Room before and everyone got a thrill from meeting each other and asked me to do it again. And I know there are other blogger gettogethers for the other genres out there but what about one big one to bring all bloggers together?

First Esther aka EstarLA and I talked about where we’d have it. Initially it was going to be at Bar Lubitsch, the setting for 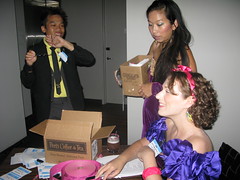 my blogiversary blowout last year. But then Esther got the bigtime hookup at the Andaz (the “Riot Hyatt”) in West Hollywood. She had written a blog post before about her meh experience there and I guess they wanted to make amends, which lead to a lunch with the Andaz folks. Blogger Prom came up and they offered to do the food, the parking and most importantly, they offered us their grand ballroom space at the top of the hotel. Once Esther and I saw the view of our beautiful city from up there when we were checking out the space, we knew our L.A blogger prom had to be there.

In any case the second most important thing was the booze,  of course.

We needed free booze because as a blogger I know firsthand that nothing makes an event great like free booze. I asked my friends in the cocktail club I’m part of, unofficially LA LUPEC, which is made of women mixologists, brand ambassadors and cocktail enthusiasts if they knew of any brands that would like to participate in blogger prom.

Immediately that’s when Natalie of The Liquid Muse said she’d create a special cocktail for the event and could get a sponsor on board for it. Cool! That’s when I recruited her for the blogger prom committee. She’d be in charge of the cocktails. And Silamith of Martin Miller’s Gin said she could get us cases of gin as well. Later Esther was able to bring Rosangel Tequila on board and Natalie, who had worked with them previously, already had a cocktail recipe that included their spirit. 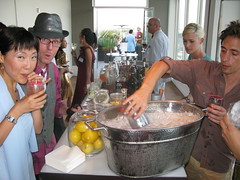 But of course there was no way Esther and I could do this event on our own. We needed help in the form of other influential bloggers; influential so that we could score the contacts and the swag to make this a stellar event. So the Blogger Prom Committee (BPC) members, in addition to Natalie, were H.C. of LA/OC Foodventures, Tara of When Tara Met Blogs, Lindsay of LAist, Marni of Happy Go Marni and Maya of Shop Eat Sleep.

Together we were able to land some awesome raffle prizes to give away during the prom. At first it was slow going but suddenly people were throwing gift packs our way to raffle off. Finally we had to cut it off at 36 raffle items. 36! That meant we’d be giving away 12 prizes every hour.

So after weeks of planning and countless emailing and Twittering, the big night arrived. The BPC met at the Andaz hours before the event to assemble 200 goody bags which included what seemed like a bazillion items: 2009 Hungry? Deck, Pinky Vodka and Martin Miller’s Gin minis, free taco cards for the new Border Grill Taco Truck, a gift box of decadent Charles Chocolates, a DVD of Warner Bros.’ Big Bang Theory and a Gap “Born to Blog” t-shirt just to name a few. Oh, and we can’t forget the lube! 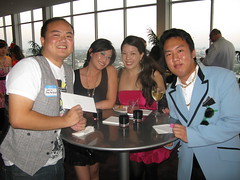 By the time the first guests were arriving, we were still in our flip flops and sweaty summer wear, trying to finish up the last goody bags. Then with only minutes to spare, we scurried to the restrooms to change into our prom gear. At this point we were exhausted, having had to deal with delivery dramas, getting yelled at by frustrated hotel folk in addition to goody bag stuffing.

Anyway, I was so excited to get dressed up. After weeks of searching out the perfect prom dress, at Jet Rag I found one: a deconstructed white lace number that reminded me of Madonna during her “Like a Virgin” performance at MTV’s first video music awards. And since my hair is too short to do anything crazy with, I donned a blonde wig. In the end I looked like a deranged doll and no one recognized me but at least no one else looked like me either. Shout out to the girls in the cute Forever 21 fuchsia prom dresses. ****Heh.

Blogger Prom itself was a flat-out smash hit that exceeded our expectations. Everyone looked so fabulous and I only saw two guys who weren’t dressed up at all: some guy named Rob who actually won a raffle prize and Pauly Shore who had stopped by to raffle off the Comedy Store gift bag. 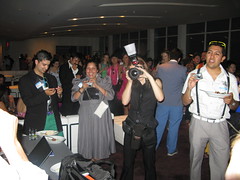 Thanks to a strict guest list of 200 bloggers with a bit more who scooched in, we never ran out of liquor or food and there was always a place for me to sit, when I wasn’t running around or dancing that is. Unfortunately, since I was too frazzled making sure everything was fine,  I didn’t get to partake of the Cheese Impresario‘s fab cheese table, Fresh n’ Easy’s wine, Polkatots mini cupcakes, Pure Cheesecakes‘ mini cheesecake pops or even really the food provided by the Andaz. There was salmon on the patio?

I didn’t even really get to hang out with my bf who ended up on a date with my best friend. Just kidding, she was just keeping him company since I was too busy. But at least I did manage to fit in a slow dance with him to Madonna’s “Crazy for You.” Twas so romantic. We found a spot in the ballroom by the windows so we could look out at the city. Oh, and I was able to get two sips of Natalie’s delicious Prom Punch Jungle Juice made with Pinky Vodka. Mmm, I wished that I had a designated driver. 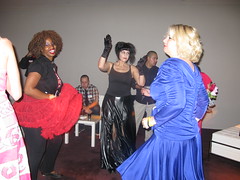 skirt), Slack Mistress (lovely birds in the hair) and Betheboy (lucky bastard won the Edison’s $300 gift basket!) — as well as peeps I haven’t seen in awhile like David Markland of creepyla.com, Abby of Pleasure Palate, Joz of JozJozJoz, Matt of Dig Lounge, Siel of Green LA Girl and Jeff of Thrillist.

And old friends like Sarah of The Delicious Life and Tastespotting, Neil of Food Marathon, Josh of Food GPS, Lauren of Ask Fashion Kitty and ThisNext, Ore of Potential Gold, Lisa and Andy of LAist and of course prom king, Zach of LAist.

I was glad that everyone had so much fun but next year, someone else do it cuz I want to be able to really enjoy it, too!

LA Weekly Style Council: We Hit It…Blogger Prom, That Is

Food Woolf: Getting To Know You at LA’s Blogger Prom