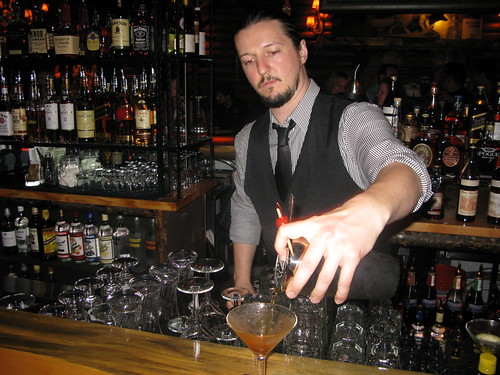 Woo hoo! Bigfoot comes to the Westsiiide! Finally! And Bigfoot Lodge West is just down the street from its theme bar sister, Saints & Sinners, and in the former Rae’s Lounge space. Sounds like trouble in the form of a very short barhop. But with such strong cocktails who needs to add a third destination? Oy, that Holy Water at S&S!

And yes, like Atwater Village’s Bigfoot Lodge, this one features those crazy woodsy-themed specialty cocktails:

Yeah, if you aren’t a big sweets cocktail drinker, you’ll be happy to know that this Bigfoot unlike that bar in the east boasts a rare collection of North American bourbon and whiskey as well as beer choices — on tap ($7 each except for Bigfoot which is $6) is Stella, Hoegaarden, Leffe, Boddingtons and Bigfoot Amber 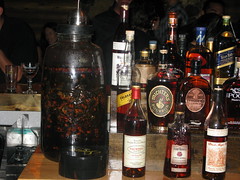 Anyway, since I’m off uber sweet drinks — they upset my stomach — I asked bartender Ian, who happens to take his mixology seriously, to fix me up a fine Manhattan. Since this was a media party and my drink was comped I just HAD to try the

Manhattan made with their more expensive rye, Hudson Manhattan Rye, which was created specifically to be used in Manhattans! The thing is that if you order the Hudson neat, it’ll set you back $24. But in cocktail 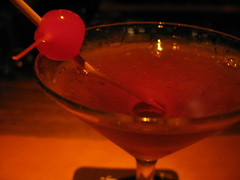 And how does a $25.50 Manhattan taste, you ask? Twas all right. It had a disorienting flat aftertaste, like it disappears and makes you want more because you’re not sure if you got an accurate taste of it. I don’t know if I’d pay for one myself, though. Actually I know I wouldn’t because that’s just wayyy too expensive. Fortunately there is a cheaper rye available, the Michter’s 10-Year Small Batch Rye for $10, which is described to taste like pepper and vanilla.

And if you’re looking for a tasty off-the-menu cocktail, ask your bartender for  Sasquatch’s Sidecar (originally the Satan’s Sidecar when it was meant to be served at Saints & Sinners). Apparently Ian is the man to go to for this awesome concoction but he assures me that the other bartenders know how to make it, too. It made with brandy, grand marnier, lemon juice, simple syrup and a rim of sugar and a flambe’d lemon peel. Yes, fyah! 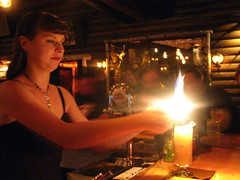 Unfortunately that will be the only pyrotechnics you’ll see at this Bigfoot, unlike Saints & Sinners and Bigfoot Atwater where they’re known to spit out the occasional fireball.

No, this Bigfoot feels so grown-up, Grandpa’s hunting lodge versus the summer camp feel of Atwater’s. Here, the bar takes centerstage, booths and a lounge seating area offer lots of places to rest your laurels, there’s a smoking patio and no giant Smokey the Bear statue greeting you at the door. There is, however, a jackalope head as well as a disco ball surrounded by antlers. Oh, and there’s talk of perhaps even opening up an upstairs space in the future.

I know I’m going to love it here. With no special comedy, iPod or movie nights, it’ll be a lot more chill. And don’t worry, they are looking into doing up a happy hour eventually.