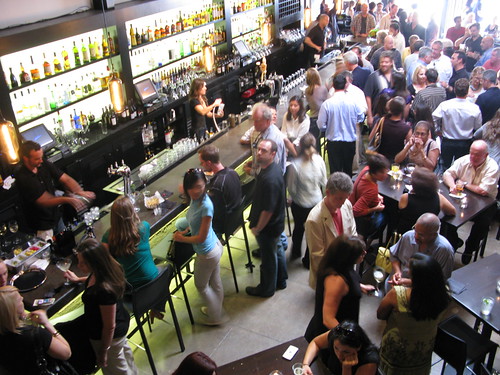 Remember when Rush Street in Culver City just opened last year? Everyone was going on about its Chicago-ness, I was excited that one of my fave bartenders moved there from Ford’s Filling Station, and, mmm, remember that butterscotch pudding?

Fast-forward to now and I haven’t frequented their bar as much as I thought I was gonna and that butterscotch pudding has since left the menu (a shame), but I fell in love with their hangover weekend brunches and keep meaning to try and make their happy hours in time. Regardless, Rush Street has become a Culver City hot spot with its club nights, comedy nights, anything nights. And now it’s celebrating its one-year anniversary and with a cocktail party no less!

You’re invited, of course. The party will be held in the restaurant’s upper mezzanine area and patio. There is a requested donation of $20 but you get two drink tickets (their cocktails are normally $10 and up), appetizers and a Rush Street gift card. Plus all proceeds of this event go to benefit the Culver Palms YMCA.

BTW, that picture on Rush Street’s site? Taken during the restaurant’s grand opening last year. I’m actually in it! Well, the back of my head is. Heh. Can you spot me?