O Solo Me-Oh: An Italian Underground Dinner by Myself 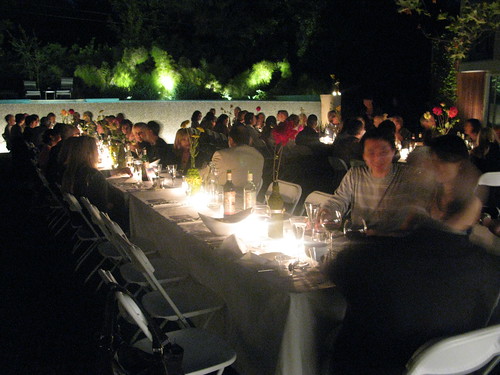 The great thing about foodie media events is that I inevitably run into other bloggers who I know, so whether I can bring a plus one or not is never really an issue cuz I’ll always have someone to hang out with. But when I got invited to chef Amy Jurist’s Underground Italian dinner at an uber swank home (did Frank Lloyd Wright design that?) north of Sunset Boulevard and wasn’t allowed to bring a plus one and I didn’t know of any other bloggers going, I got nervous. Hey, I’m really shy and HORRIBLE at small talk. “SO, it was sunny today….um.”

But she assured me in email that because of my post, some of my crackheads had 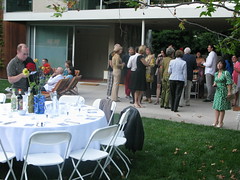 already reserved some spots so that I would of course have some folks to talk to. But, the thing is, I don’t know EVERYone who reads my blog and I’ve found that sometimes they don’t want to talk to me for some reason. I decided to just force myself through the dinner though. Hey, if you don’t try anything new or uncomfortable, you’ll never grow, right?

The emailed invitation for this event had indicated “hip casual attire” so naturally I took that to mean jeans with a pretty top. But when I arrived, everyone was dressed up! Well, I guess “hip casual” for rich, older people is guys in slacks and buttoned shirts and jackets and women in dresses. And I felt even more out of place cuz there didn’t seem to be many people around my age.

I sat near a fire pit and surveyed the crowd gathering in the backyard and lining up at the wine bar. “Who looks like they read my blog?” I wondered. But I couldn’t figure it out. 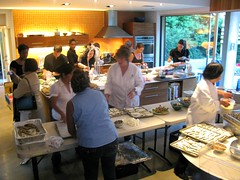 And I don’t know why but it took FOREVER for the dinner to get started. I’m sure if I had a companion I would have enjoyed this time by chatting, drinking even more wine and sampling the tasty appetizers. But instead I stood off to the side, alone, people watching. Then I realized that I could hide behind my camera so started taking pictures of random things to pass the time. Ugh! This was excruciating!

It seemed like no one wanted to be the first to sit down at the beautiful dinner tables set up on the grass in the backyard so I just started it. Sat there with my big, ol’ bag and my camera keeping me company and looked around at all the groups of friends chatting and smiling, the couples giggling and drinking wine. Blah.

Finally, a nicely dressed gentleman walked up to me and asked if someone was sitting next to me. “No,” I said, trying not to sound too desperate for company. “Great! I’m on my own, too!” he said, “And I’m gay so I won’t hit on you.” “Fabulous!” I replied, laughing. Apparently he was going to sit next to a group of other gay guys, all paired 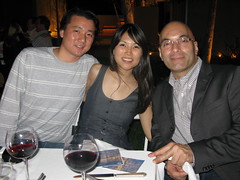 up, but there really wasn’t room there. They kept coming by after, saying how they were glad that he found another single.

Next, a young Asian couple asked if they could sit next to us. Yay! More people! And turned out that they were my readers! Well, that just made it even better. And since five people had flaked on the dinner, we had that end of the table all to ourselves, making scintillating dinner conversation easy.

We found out where each of us was from, where they worked. We talked about how difficult dating in L.A. is especially if you’re a gay man who’s not into clubby scenes. And because they wanted to know, I told them why I was banned from a certain bar. Good times.

During the dinner, different people came up to me actually saying they read my blog. That made me feel really good. I even met the designer who created the floral centerpieces for the dinner tables, the renowned Jonathan Fong, and he is now 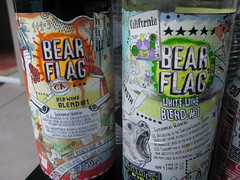 going to do the floral arrangements for blogger prom next week! Schweet!

Through it all we were moving from one delicious course through another and our wine glass was never empty thanks to the nearby bottles of yummy Bear Flag white and red wines. This was a really special dinner. Very intimate even though there were three long tables’ full of people.

The only thing was that since it was outside and it hasn’t been a very warm summer thus far, it got really chilly and the food got cold fast. The invitation did warn us to bring jackets for the chilly night but since the day was warm a lot of us mistakenly thought the night would be bearable. As it was, I was shivering through my thin sweater, aggravating my cold. The young couple retreated to their car to fetch the guy’s sweatshirt for the girl.

I had debated whether I should introduce myself to Amy but my dinner companion did it for me as he is friends with her. Through the dinner he was telling me how her previous event, The Bacon Affair, brought about a much different crowd, ** 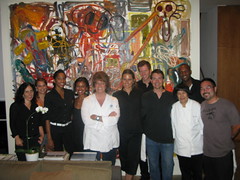 **younger and hipper. We chalked it up to that event taking place in a penthouse in West Hollywood. While this event was taking place at Amy’s brother’s house and apparently he invited a lot of friends over. It did seem like everyone knew each other.

In any case, Amy was a wonderful hostess. Very exuberant and warm. And man! What a loud whistle she has! She did that every time she came out to introduce each course. Definitely an effective way to get a crowd’s attention.

But back to the food, everything was fantastic. However, since I had just started my no-dairy fast and health kick I didn’t indulge as much as I normally would. I only allowed myself one of those prosciutto cups with the fig and goat cheese, I didn’t eat the mozzarella in the mozzarella and tomato salad, and I barely touched the eggplant with parmesan. The only thing I did say yes to was the mixed berry and banana tiramisu with Chambord and Amaretto. How could anyone say no to that? And it was worth it. The perfect thing to have as my last dairy product in ** 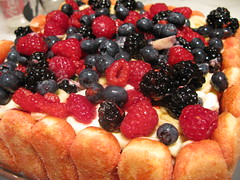 **a long time. This wasn’t chocolate or coffee based, however, but still tasted awesome with all those fresh berries. So rich and creamy.

OK, so, yes, I did end up enjoying myself but I still think it would have been even more fun if I had a friend or my bf with me. I loved my dinner companions, though, and have talked them into meeting up with me at the beer float showdown at the end of the month!

BTW, if you’d like to attend one of Amy’s dinners, check out her Web site. I think she said her next one will be Mediterranean cuisine.