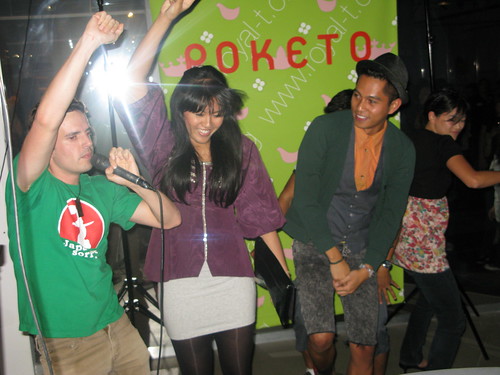 Ugh, I feel so guilty. You know how I was supposed to judge that Karaoke Idol competition at Royal/T on Friday? Well, I was late to it. No excuses; let’s just say that Royal/T really needs a parking lot if they’re going to continue to have events like this. I even fell down in the street running to get there in heels. Blah.

In any case, by the time I had arrived there at 10:45 (my gig started at 10:30 and the party itself started at 8) it was in full swing and everyone looked like they were 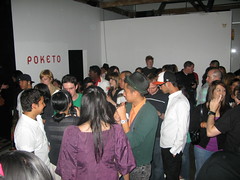 having such a great time. The bouncer at the door had told me to go to the back room for the karaoke contest but that I was late. I know, I know!

When I got back there, it looked like I had missed the whole thing. The judges were already on stage, loudly giving their scores by holding up little cards a la Dancing With the Stars. I went to the dj table anyway and checked with the little Asian girl that was standing there next to the dj.

“Hi, I’m Caroline? I’m one of the judges?” I don’t know why I was saying that like I was asking a question. I just felt bad and was steeling myself for the onslaught of guilttripping about to come my way. But it didn’t. Instead the girl was apologizing to me for missing it! “I’m so sorry. We had to pick someone else because we called your name twice and didn’t hear from you,” she said, pouting. Then she called over the guy who was MCing the event. And he apologized, too!

He then offered to say my name anyway by having me announce the winner but I was like, “Why?” I’m just a late blogger so it would just seem random for me to go 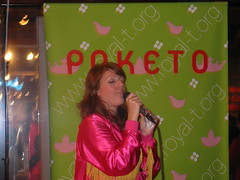 up there to do that. So we didn’t do that.

But to make things worse, the little girl gave me two really cute Poketo t-shirts (Karaoke Dance Party and karaoking cat) and their “best-selling” wallet, which they had given to all the judges. I really shouldn’t have taken them but they’re so cute! …Ugh, now I feel guilty for taking them.

So I stood around afterward while they continued with the regular karaoking, clutching my swag and taking pictures. The singers hitting the stage were so into their performances. And even the audience was getting into it. Twas awesome. Of course I think the cocktails and beer had a lot to do with it but whatever, made for some great pictures.

No power ballads but definitely lots of party favorites…except that one dude singing Time After Time. Wtf?

Since things seemed to be winding down a bit in the karaoke room, I went to the 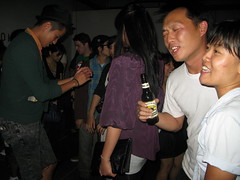 front of Royal/T to see if I could find friend and fellow blogger prom committee member, Tara of When Tara Met Blogs. I found her immediately sitting in the cafe with a glass of champagne in her hand and chatting with a friend.

She filled me in on what I had missed by coming to the party late. Apparently earlier there was a long-ass line for drinks. And happy hour was still going on even though it was passed the happy hour end time of 10. But those prices weren’t especially cheap anyway: $5 Ichiban beer, $7 wine, $8 champagne.

Then we saw someone passing out a tray of food. “We’ve been here for hours and that’s the first time we’ve seen anyone giving out food,” Tara said. Unfortunately it was just green tea flan. Very…um, yeah. Didn’t finish it.

So it sounds like I missed quite a karaoke party. And if I wasn’t late and didn’t have a cold I totally would have hit that stage. My song? “Single Ladies.”

Hopefully this isn’t the last time we see karaoke at Royal/T and at least the Poketo pop-up shop is there through July 19 so if you like the swag I got, it’s there. BTW, that karaoking cat t-shirt is so cute. It’s “singing” “Hit Me With Your Best Shot” which won “Favorite Karaoke Song” on the Poketo site.