When I told my L.A. cocktail enthusiast friends that I was spending my Fourth of July/bday weekend up in San Francisco, they all told me that I had to get myself to Heaven’s Dog right quick. “You’re in SF?” Johnny the Fish of Social Domain texted me as soon as I had Twittered I was in the Tonga Room post hotel check-in. “Get to Heaven’s Dog for cocktails immediately.” OK, OK, I obliged, Sheesh. I had managed to drag my bff, an SF local, and her work buddies to HD in SOMA as well. Surprisingly none had ever been there for cocktails considering it’s close to where they work.

For a Thursday night before a holiday weekend, the lounge area wasn’t too packed and there were actually seats available at the bar. However, we squeezed our group of six into a seating area comprised of a small couch and ottomans since it was the 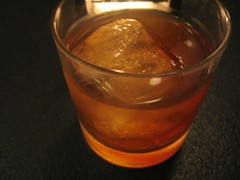 only place left for a group of our size. An annoying group of double-dating couples had snagged the bigger seating area before us.

I got over that right away as soon as the cocktail menu was handed to me. Sooo many yummy-sounding drinks and all for only $10 each! I recognized Remember the Maine, which I had had at the Varnish, but everything else sounded exciting and new.

My first cocktail was the

Cap Hatian Rum & Honey. With Barbancourt 15-year rhum, local organic honey, Angostura bitters over a big hand-cut ice cube, its aromatic and potent yumminess hit the spot after having spent most of the day on the road.

Unfortunately it seemed that no one else in the party was all that thrilled with their cocktails. I had suggested bf get the Remember the Maine thinking that since he’s become quite the Manhattan fan that he’d love its mix of rye whiskey, Italian vermouth, cherry brandy and a drop of absinthe. But, he didn’t. I offered to drink it for him but he held onto it, nursing it the rest of the night. 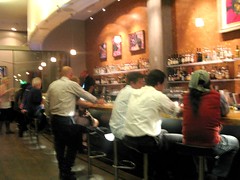 One of the girls in the group had asked for a sweet, chocolate-y cocktail, of which they have none on the menu but the server offered to fetch her a coffee cocktail. He brought back this frothy concoction with a sprinkling of nutmeg and the use of coffee liqueur. But this wasn’t sweet enough for its intended drinker and she wasn’t thrilled with its “medicinal” aftertaste.

When the server came back to find out if she liked it, she only said, “It’s fine.” Of course her crossed arms and legs told a different story. The server took it away and she had a sparkling wine instead.

I, on the other hand, was ready for my second cocktail, the Tiger’s Milk No. II, a creamy mix of Spanish brandy, rum, sugar, cream and nutmeg. OMG so tasty. Dangerously drinkable, I could down two of these one after the other. It wasn’t as sweet as its ingredients implied it would be but I think it would be an awesome way to finish off your dinner.

Now, I ended up returning to Heaven’s Dog the next day for my birthday-in-SF dinner. But since I had already gotten cocktailed up thanks to two Bourbon & Branch drinks (more on that later) on a painfully empty stomach earlier in the 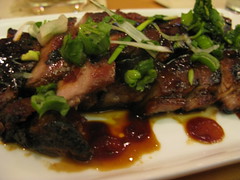 evening, I was in no shape to indulge even more at HD. So instead I sampled their nonalcoholic offerings whilst enjoying their tasty vittles. And this time we sat at the bar.

For an appetizer, we split the char shui ($8) of barbecue pork, sesame and honey hoisin sauce. It was so succulent, tender and saucy and the amount was perfect for the three of us but I could have totally ordered this by myself with a side of brown rice for a nice dinner. G-damn! It was so tasty.

Instead, for dinner, I got the flank steak with asparagus and baby shiitakes ($15). It was m’OK but frankly I liked the char sui better.

After our plates were cleared, my bff “surprised” me by ordering up a chocolate sorbet with a candle sticking out of it. Awww. (I was sitting right next to her when she mouthed “It’s her birthday” to the bartender.) Now I’m not usually crazy about sorbet; not a fan of its iciness but this one was surprisingly creamy and rich! It actually tasted like gelato. A delicioso dark chocolate gelato that came with a side of bing cherry compote! Mmm! This was the perfect amount of sweet without going over the edge but satisfying my sweet tooth. 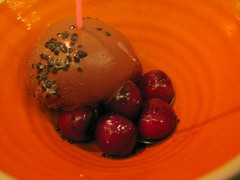 Once the staff behind the bar found out that it was my birthday they couldn’t have been nicer or more gracious! The bartender served me up a special nonalcoholic cocktail on the house — raspberry flavored and fizzy (don’t really remember since I was still reeling from those B&B cocktails) and the bar back (?) even poured me and my friends some complimentary sparkling wine. I love this place!

I left feeling like I was walking on air. The best dinner, service and, not to mention, company. What a great bday. I had only wished I was able to have one more cocktail here.