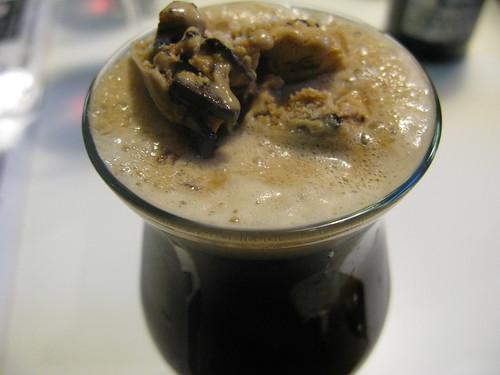 Guess what? BottleRock in Downtown now serves BEER FLOATS! Just this week they started selling hand-made ice cream from Milk Creamery to serve as dessert to Jared Levy’s (formerly of Blue Velvet and Providence) fine cuisine so they thought, why not beer floats? Why not, indeed! And what makes this, dare I say, better than the Golden State’s float is that not only is it $7 as opposed to $8 but you have your selection of beer-ice cream combos to choose from.

How did BottleRock come up with these fantastically inspired combos? Lots of experimenting and taste testing every combo possibility by Jared, beer guru Alex Macy and the kitchen staff. I want that job!

If you’d rather just have the ice cream, you weirdo, it costs $9 for three scoops and there are only three flavors: vanilla gelato, espresso toffee and fresh cherry sorbet. So Golden State is one up on the fact that they have more ice cream flavors and that it’s Scoops to boot.

So guess which float I had? If you guessed St. Bernardus ABT 12 Coffee Toffee float you know me too well. This is sooo much better than the Rasputin float at GS in that the beer is much smoother with none of the bitterness of the Imperial Stout, which was initially jarring. Rather, the St. Bernardus’ sweet, rich aroma blends well with that coffee flavor and its creaminess complements the toffee nicely. So far my favorite beer float ever. And at the end, you have this wonderfully creamy head on the beer with bits of chocolate-covered toffee to spoon out of the bottom of the glass. Drooool.