The Golden State of Beer Floats and Diet Downfalls 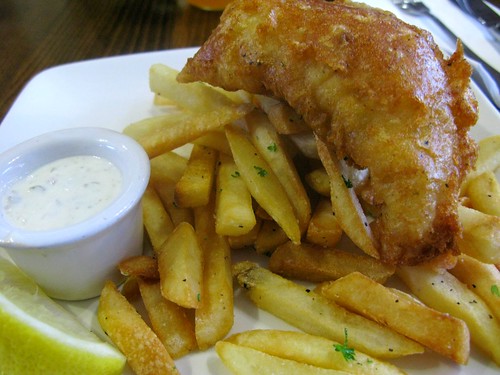 Alas, I’m not loving California too much lately. First Prop 8, then Miss (now former) California. And don’t get me started on how Lakers fans downtown showed the world that we celebrate a win with looting and violence. As a native Californian, I’ve hung my head down in shame many times this past year. But The Golden State Cafe, in the former Nova Express space on Fairfax, reminded that there still are some things to like about our Left Coast. We’ve got great beer, food and Scoops! 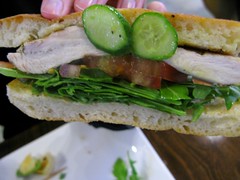 OMG I just love this place so much and don’t understand why it took me so long to get here. Oh wait, it was because The Golden State with its conglomeration of fine craft beer, Let’s Be Frank dogs and Scoops ice cream was all anyone could talk about since it first opened back in March. But with it being June, I figured the hype would have mellowed out by now. And on a Friday evening, it sorta was the case. We were able to get a seat without a wait and the line to order was only four peeps long.

And from the Fiscalini cheddar on the burger to the art on the walls, the only thing without a strict Cali pedigree is the beer: A few rare imports snuck onto the list of homegrown artisanal selections.

At first I had worried that we would have to stand to enjoy our food since every seat in the small cafe was taken and it looked like a Father’s Office situation where you have to seat yourself and prey on tables that look like they’re almost done. But fortunately the efficient wait staff kept the tables moving. And people didn’t linger too much despite the Stanley Cup Finals game playing on the huge flat screen. 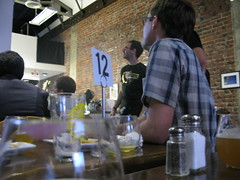 I did worry, however, about what to get for dinner. You see, lately I’ve been trying to eat healthy. “Trying” being the keyword. But with the yummy-sounding burgers and hot dogs on Golden State’s menu calling my name, I was having a difficult time making the healthy choice.

Ah eff it. I decided to go for the Harris Ranch beef burger ($10) with Fiscalini Farms cheddar, glazed applewood smoked bacon, arugula, aioli and ketchup. I’m here, I have to try the burger, you know, for research. But then the really nice guy behind the counter started talking up the fish n’ chips. “We only have it on Fridays. It’s really good,” he said, taunting me. Hmm, fish n’ chips sound worse for me than the burger…but they only have it on Fridays. Arrgh! “M’okayyy, I’ll get that,” I said. And if I’m going to blow this diet I might as well go big. So I ordered a beer float ($8) — Rasputin Imperial Stout with Scoops brown bread ice cream. I just had to! Apparently you can order any ice cream flavor you want with the float but the brown bread was recommended as the best to pair with the beer. 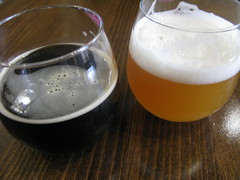 OK, full disclosure, I ordered a beer, too. The Angel City Dunkel (the one on the left), from Angel City Brewing in Torrance, isn’t on the regular menu and it came highly recommended. It was nice, rich and very tasty. My bf ordered the only non-Californian beer in the place: the Allagash Curieux from Portland, Maine. It sounded like a good one considering it was aged in a Jim Beam barrel. But, I ended up finding it too yeasty for my taste and preferred my beer over it. Bf did say it went nicely with his chicken sandwich and cucumber salad, though.

If you crave something other than beer with your meal, there’s also a nice selection of California wine as well as actual Virgil’s root beer on tap and bottles of Virgil’s cola and Reed’s Ginger Brew.

As for my fish n’ chips, I was pleasantly surprised by how non-sinful they tasted. The fish was flaky and delicious while the beer-battered exterior wasn’t too bready or oily. 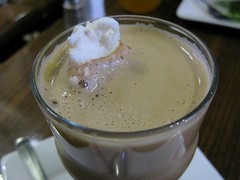 It’s probably the healthiest-tasting fish n’ chips I’ve ever had. The thick chips offered a slight crisp exterior with just a hint of salt. I made sure to not polish these off since I still had that beer float to power through.

And oh my, that beer float. Initially it tasted like shampoo, not good. But then as I got accustomed to this unusual pairing, I grew to like it. Unlike root beer floats, this one wasn’t over-the-top sweet for obvious reasons. The bitterness of the beer worked well with the ice cream. And because the Rasputin is nitrogenated instead of carbonated like root beer, that made for a creamier, bubbly mouthfeel. Carbonation mixed with dairy usually creates a lot of foam.

BTW, if you just want ice cream for dessert, a scoop of Tai Kim’s famous ice cream is $2. And the night we went, flavor selection included Maple Oreo, Chocolate and Captain Morgan and Butternut Squash to name a few. You can also get a root beer float for $5.

Although The Golden State is a bit pricey for a casual meal (over $50 for the above dinner for two), I don’t care. I love it and want to go here every chance I get. How can I resist? Everyone at the cafe is so nice and knowledgeable, the food is the best of CA and dammit, it has Scoops and a beer float. Now if only they had more places to sit and a Westside location.