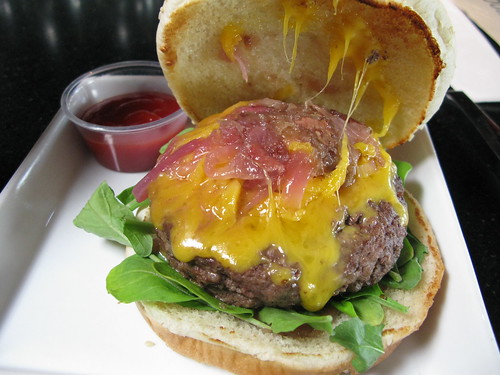 Jason, Jason, Jason. When reading the Yelp reviews of Brentwood’s Bar Food, Jason Killalee seemed to be all the reviewers ever talked about. Apparently he’s the charming Irish host and owner of the newish gastropub on Wilshire Boulevard.

I was looking for an affordable place to grab a bite in Brentwood and miraculously found Bar Food on Yelp. And in addition to all the gushing about Jason, there were lots of good reviews about the food, too. So my bf and I went there during happy hour on a Wednesday, just a little before 6 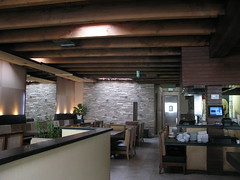 and found it to be empty. So weird considering it’s a happy hour (which happens 5-7pm) but at the same time I couldn’t help but be grateful.

We grabbed some stools at the bar and were able to chat with Jason and the waitress. He kept climbing up on the bar to fix some computer issues and later tried to push hot dogs on us.

“Hot dogs are free during happy hour and Miller Lite is $3,” he said so happily that I felt really guilty turning them down. Hmm, maybe I do want a hot dog. But no, I resisted and ordered the bar burger ($8.50) instead.

Yelpers had said that Bar Food’s burger rivals Father’s Office so naturally I had to give it a try. And yes, although it had those savory onions and was pretty cheesy, It’s close but no cigar. The meat wasn’t as juicy and it tasted like it was missing something.

Don’t get me wrong, it was a tasty burger, even bf liked it, but I wouldn’t say FO should lose sleep over it. I do like the price, though, and found it satisfying for afterwork hunger. 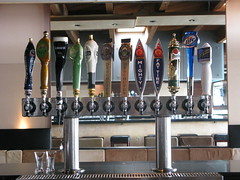 Now, this bar/restaurant only serves beer and wine. Apparently they’d like to keep it that way for now to repel marauding college students looking for Jager shots and AMFs. And it seemed to be working as the crowd that started to filter in during the course of happy hour consisted of professional types in their 30s and up. Here, the Lakers game played quietly on two small TVs. Down the street at Q’s it plays on a bazillion screens at full volume.

The beer selection itself was decent with everything from Peroni to Sapporo to Hemp Ale ($5-$6). They even have Guinness 250, Guinness’ anniversary stout, which I guess is more like a porter than a stout, according to the waitress. But I ordered up the Black Butte Porter. So smooth and chocolatey I think that’s now one of my favorite beers ever.

Before we could order dessert, Jason brought us two hot dogs drizzled with 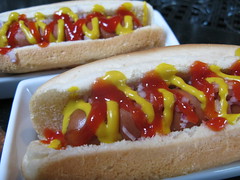 ketchup and mustard. “No really, I’m too full,” I insisted. “Are you sure? Not even a bite?” he asked, charming as ever. Must. Resist. Cute. Accent. But I still had room for dessert!

So we got the ice cream cones ($5) which were homemade chocolate and vanilla varieties. Because I’m crazy about him, I let bf have the chocolate cone while I nursed the vanilla one. Instantly I regretted that. The vanilla one was, well, just so vanilla. At least the chocolate scoop had some chocolate bits…and it was chocolate!

Jason saw my dismay and offered to bring me out another chocolate cone. Awww! I snatched it off the plate right away as he presented it. “It’s funny how people don’t have room for more food but they have room for more dessert,” he said laughing. “There’s always room for dessert!” I said, biting, not licking, the ice 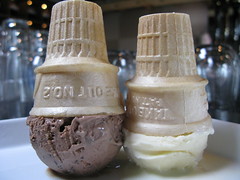 In any case, I love this place. And I hope it stays around for awhile. It’s the third venue in this space. Previously it was a Japanese restaurant and that shows in the large back wall of soju jars (?) and the zen decor. Kinda lends a temporary feel to the place. But I hope it doesn’t go anywhere.

It doesn’t really have an online presence — try Googling its name and its Web site is stuck in the Comic Sans ’90s. But don’t let that fool you. It’s a great place to grab a pint and hang out with some friends.

I’ll have to go back. Apparently the Thai Bangers and Mash dish is to die for.