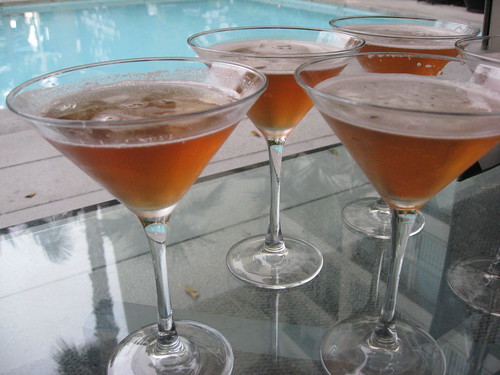 Even though I love my whiskey (and whisky), I was never a huge fan of Scotch. Blame it on the time Damian, my fave bartender, made me a Laphroaig cocktail which ended up tasting like Band-Aid. Blech. Yes, I wasn’t crazy about that smokey, peaty flavor. But when blogger friend estarLA invited me and a few other bloggers — H.C. of LA and OC Foodventures, Maya of Shop Eat Sleep and Julie of LAist — to a Macallan Scotch tasting at the schwank Viceroy in Santa Monica, I couldn’t say no. Heck, I was willing to give “the best whisky in the world” (as voted by Food and Wine magazine) a chance and it didn’t hurt that we would be enjoying all this in a poolside cabana. 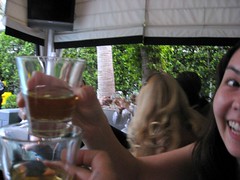 Eden Algie, the Macallan brand ambassador, was to be our tour guide through the brand’s different vintages. He eased us into the spirit with the hotel bar’s Macallan maple cocktail ($13).

Made with Macallan 10, maple syrup, bitters and gingerale, the cocktail was meant to demonstrate how whisky/whiskey is a much younger spirit nowadays. No longer the stuff to be enjoyed by old men in smoking jackets sitting in armchairs with a bloodhound lying at their feet. “There’s a lot of pomposity drinking whisky. I’m over that,” Eden said. But suffice it to say, the cocktail was a bit sweet and syrupy and I would have liked more Scotch as the maple syrup dominated.

I needn’t worry, though, as we were presented with the

10-year Macallan neat. I tentatively took a sip but not before enjoying the potent fragrance of this amber-colored spirit. Anticipating a burn in the first sip followed by something earthy, I was pleasantly surprised to find something so smooth with floral, vanilla and toffee notes.

I could easily do this one neat, even enjoying it on a sunny day as it was pretty light. Eden suggested the 10 be poured over ice and topped with gingerale. “Refreshing for the 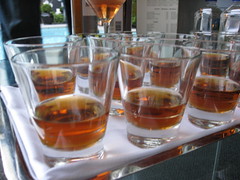 Next up was the Macallan 18-year-old, which in 2004 was voted best whisky in the world by Whisky Magazine. Darker and mahogany in color, this one proved to be richer and heavier like a cognac.

I definitely wouldn’t dilute this baby in a cocktail. Nope, best enjoyed neat where you sip it slowly so you can savor its notes of clove, spice, orange and wood smoke. Eden said this would pair nicely with a steak or a chocolate cheesecake. Unfortunately, a bottle of this stuff costs a pretty penny — $144.95 at Beverage Warehouse. Hmm, anyone wanna buy me a present?

“Are we tasting that one next?” I asked Eden gesturing to the Macallan 55 in Lalique lying in a satin-lined coffinlike box on the coffee table before us. “Uh, no,” he said. “That’s $2,000 a shot and $16,000 a bottle.” Yikes! That’s just craziness! I wondered if the people who bought one of the 100 bottles in America actually ever opened it or if 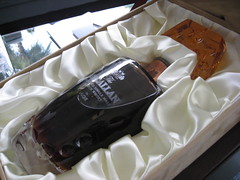 they just display it prominently in their liquor cabinets. And what does it taste like?

When the event was done, the hotel’s bar manager came by our cabana and scooped up the Macallan 55 to lock it away in the hotel’s safe. Yeah, that’s probably a good idea with us bloggers in such close proximity. Heh.

Oh well, didn’t get to taste what would have been the most expensive spirit I ever laid palate on but at least my eyes have been opened to the joys of a good Scotch. Hmm, I think I’ll start a savings account now.

BTW, Eden said if you ever find yourself in a duty-free shop, check out their Macallan selection which includes bottles that you can’t get anywhere else, like the Macallan Elegancia 12-year-old which has been aged in sherry oak casks that had previously held Oloroso and Fino sherries and the Whisky Maker’s Selection.