826LA: You're My Inspiration 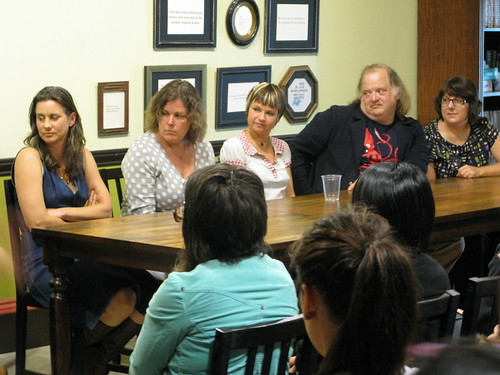 826LA is an awesome non-profit organization that not only helps kids 6-18 with their creative writing skills but it hosts cool events like writing seminars and dead author readings. When I heard that 826LA East was going to host a food writing panel where noted food writers talk about writing in various mediums, how to review a restaurant and the business side of the genre, I just had to go. OK, it helped that Jonathan Gold of LA Weekly and Pat Saperstein of Eating LA were on the prestigious panel.

So while all my blogger friends were enjoying a night of cocktails, chair massages and homemade popsicles poolside at the new boutique hotel, Chamberlain in West Hollywood, I was here, hoping that these writers would be able to teach me to come up with words other than “yummy” in describing restaurant food.

The food writing panel took place at 826LA’s Eastside office in Echo Park, in the back of the Echo Park Travel Mart — a weird little convenience store that sells an array of time-traveling products like a Pangaea travel poster, caveman perfume and sequined berets.

Stories, a bookstore/cafe, since the cashier at the travel mart had said I was allowed to bring food into the classroom.

Unfortunately, trying to balance a notebook, a stupidly huge handbag, a boxed sandwich and a full cup of latte proved troublesome while going through the doorway and pushing open the door. Yes, I dropped the latte spilling its entire contents onto the floor. Bah! I felt so embarrassed. What a way to make an entrance, with the other writer students looking on. Fortunately, the lady at the travel mart was sooo nice about it. She managed to clean up my mess without the benefit of a mop or paper towels.

Anyway, I finally made it safely to a seat in the classroom which was set up with chairs as well as comfy old couches. I snagged a spot in the back so that I could discreetly eat my sandwich and later take pictures. I didn’t see any other bloggers here that I recognized except Elise and Caleb from LAist. The rest were eager students sitting at attention in their wooden chairs and armed with their notebooks — pads and computers.

When it was time, the panel was introduced and directed to sit behind a long wooden table at the front of the room. Besides J Gold and Pat there was also Colleen Dunn Bates of eat-la.com, co-editor of LA Times‘ Daily Dish Jessica Gelt, Jeanne Kelley of Eat Fresh and moderator Christine Moore of Little Flower Candy Company.

The evening was an hour and a half of easy-flowing discussion on everything from whether a food writer should know how to cook to the comedy of pureed mozzarella at The Bazaar by Jose Andres.

What a fun and inspiring evening. I may not have learned how to come up with other words to describe food but I did learn that being true to myself and developing my own voice is the best way to go. BTW, after the panel, Pat also recommended that writers take classes with Mediabistro, which offers a wide selection of writing courses.